Smartwatches and other wearables can enhance the practice of law, attorneys say 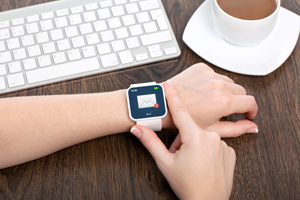 Smartwatches and other forms of wearable technology aren’t just for fitness enthusiasts or techies that can’t bear to be away from the Net.

In a Friday afternoon session at ABA Techshow, attorneys Rick Georges and Robert Sisson talked about how wearable technology has enhanced their ability to practice law on their own terms.

Showing off their large collection of smartwatches, virtual reality devices and other gadgets, Georges and Sisson talked about their favorite devices while providing examples of how they used them in their practice.

“[These devices] enhance human function,” said Georges, a real property and trusts and estates lawyer in St. Petersburg, Florida. “My whole impetus is that I don’t want to be tied to a desk. I wanted the ability to be a lawyer no matter where I was. Anything that enhances your use of a computer also enhances the practice of law.”

For instance, wearable technology allows a lawyer even greater flexibility to practice law remotely. Boasting better battery life than almost all smartphones, smartwatches can be a more reliable means of keeping in contact with clients – especially in court or behind the wheel where lawyers can’t use their smartphones.

“I use my smartwatch every day in court,” said Sisson, a criminal defense lawyer in Appleton, WI. “I can’t use my smartphone in court, so the watch is a great way to check messages or receive notifications.”

Georges added that smartwatches aren’t intrusive or disruptive, like smartphones can be. As such, judges rarely have a problem with them. “Everyone looks at their watch,” said Georges. “Most judges won’t have a problem with you looking at your watch to keep track of what’s going on.”

Smartwatches have also become fairly affordable due to competition between companies like Samsung, LG, Motorola and now Apple. Buyers can purchase a high-performing smartwatch for only a couple hundred dollars. Of course, there’s also a high-end watch that’s perfect for connoisseurs with money to burn, like Apple’s $17,000 gold-and-sapphire model.

Each of the presenters had their favorite watch: Sisson liked the Asus ZenWatch, while Georges boosted the Samsung Gear S.

As far as cybersecurity issues go, Sisson said that wearables are no more dangerous than other mobile devices. “You just want to make your best effort to keep your client’s data secure,” said Sisson. “The only way your data is exposed is if someone hacks your smartphone prior to you syncing a device to it.”

Sisson and Georges were also bullish about the wearable devices coming through the pipeline and how they might change the legal profession. For instance, Georges talked up Samsung’s virtual reality headset that could eventually allow lawyers to hold hearings, take depositions and interview witnesses without ever leaving the office.

And of course there were other reasons why Georges had to have it. “I’ll be honest, I bought it because it’s fun,” he said. “I can load a movie into my smartphone and connect it to the virtual reality headset and watch it in 360 degrees.”