Spirit of Excellence honorees strive for diversity and inclusion 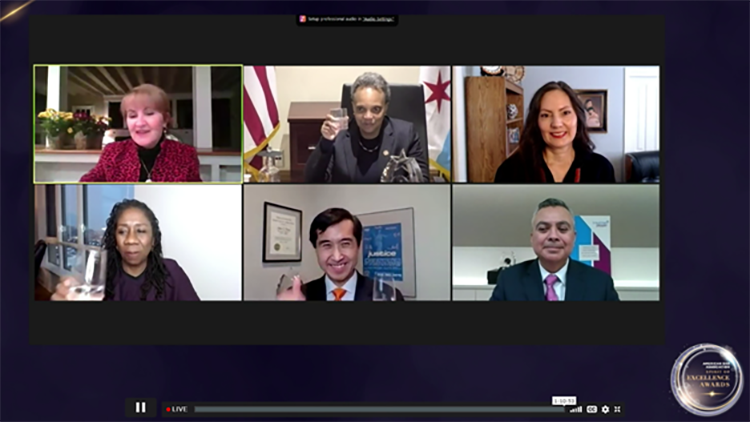 “These outstanding lawyers are the embodiment of excellence in our profession,” ABA President Patricia Lee Refo said after reading the names of the recipients of this year’s Spirit of Excellence Awards at a virtual ceremony Thursday. “They stand with other giants in the law, and we are impossibly grateful for their many contributions to our profession and service to our communities.”

Each year, the ABA Commission on Racial and Ethnic Diversity in the Profession presents the awards during the midyear meeting to lawyers who excel professionally; personify excellence at the national and international level; and demonstrate a commitment to diversity in the law.

Refo reminded attendees that the Spirit of Excellence Awards ceremony not only celebrates the five recipients but also renews the “awareness that all of us, all lawyers, are stewards of our justice system, and all lawyers must do our part to ensure that our profession looks like the America we serve.”

She added, “This charge is all the more important in these challenging times, when issues of racial injustice continue to confront us.”

Reginald Turner, the president-elect of the ABA and a past chair of the Commission on Racial and Ethnic Diversity in the Profession, also congratulated this year’s five honorees and commended them for “being the leaders, role models and examples of courage and excellence that we need now more than ever.”

“At a time when racial polarization is prevalent and long-standing systemic inequities persist, the Spirit of Excellence Awards remains a positive tradition of the American Bar Association that shines light on exemplary individuals who work each day to conquer obstacles, drive progress and strive for change,” he said.

This year’s Spirit of Excellence Awards recipients accepted their awards via video and appeared on-screen together at the end of the ceremony Thursday. Brief excerpts of their speeches and details of their achievements are below.

Barbara L. Creel is a professor at the University of New Mexico School of Law, where she teaches courses on Indian civil rights and wrongful convictions and introduces students to federal habeas corpus in the Southwest Indian Law Clinic. She is a member of the Pueblo of Jemez and worked for the Native American Rights Fund as an undergraduate at the University of Colorado. After graduating from the University of New Mexico School of Law, she worked for the National Advisory Council on Indian Education in Washington, D.C., and the Native American Program of Legal Aid Services of Oregon in Portland. She was also an assistant federal public defender in the District of Oregon.

Román D. Hernández is the managing partner of the Portland, Oregon, office of Troutman Pepper. He focuses his practice in commercial and employment litigation and provides advice on employment policies and practices to employers. He graduated from Lewis & Clark Law School and was one of three founders of the Oregon Hispanic Bar Association in 2002. He served as president of the Hispanic National Bar Association. As the founder and former chairman of the HNBA Legal Education Fund board of directors, he assisted the charitable organization in developing pipeline programs for Hispanic youth interested in pursuing legal careers.

“It is a subject matter that matters greatly to me, that is, increasing the diversity of the legal profession. It is something that I have worked for and committed to my entire career, and I am deeply humbled to have received this award from the commission. As part of my receipt of this award, I make the commitment to this group and to others that I will continue to advance issues of diversity, equity and inclusion in the legal profession in my local community and nationally, as appropriate. It is the reason that I have dedicated a large portion of my career to advancing those issues because still 20 years after I started practicing law, the legal profession remains the least-diverse profession in America. I am committed to continuing the work that I have done for over 20 years.”

Sherrilyn Ifill is the president and director-counsel of the NAACP Legal Defense and Educational Fund, Inc. A graduate of New York University School of Law, she first served as an assistant counsel for the civil rights legal organization and litigated voting rights cases for five years. She then taught at the University of Maryland School of Law for 20 years. In returning to the Legal Defense Fund in 2013, she became the second woman to lead the organization.

“I have been hard on our profession over the past four years. I have expressed my disappointment with the failures of lawyers and the institutions of our profession to speak clearly and unequivocally when the actions of lawyers have violated the principles of equality and justice to which we have all pledged ourselves. Lawyers are privileged to be considered leaders in democracy, and we must earn that gift of leadership … And so I challenge you to stop talking about diversity and inclusion, and to make it happen; to stop talking about criminal justice reform, and to do your part to change a system so [rife] with racism and arbitrary cruelty that it shames our nation; to stop talking about the rule of law, and speak out when those in high places abuse the legal process and violate the law with impunity.”

Lori E. Lightfoot is the first Black female mayor of Chicago. Since her election in 2019, she has implemented ethics and good governance reforms and worker protection legislation, and invested in education, public safety and affordable housing. Before becoming mayor, the University of Chicago Law School alumnus served as a senior equity partner in the litigation & dispute resolution group at Mayer Brown. She was also president of the Chicago Police Board and chair of the Police Accountability Task Force. In addition to her other government roles, she served as the chief of staff and general counsel of the Chicago Office of Emergency Management and Communications and as an assistant U.S. attorney.

“Though this wonderful award serves as a recognition of professional accomplishments, I’d like to instead receive it as a standard to live up to and a challenge to be worthy of what it represents in the months and years ahead. We need to repair damage that has been done, and central to this has been the assault on the rule of law. To be clear, by rule of law, I don’t mean a crime statistic or FBI report; I’m talking about the structural framework within which we as a society must function. The framework which is rooted in our shared values as a society, among which is that we are a nation of laws; that no one person or group has a right to disrupt or abuse that system or ignore it with impunity; respect for the importance of the independence of the judiciary; and that no one is above the law.”

John C. Yang is the president and executive director of Asian Americans Advancing Justice | AAJC in Washington, D.C., where he helps advance the civil rights of Asian Americans and create a just society through advocacy, education and litigation. He graduated from the George Washington University Law School and later served as the principal adviser to U.S. Secretary of Commerce Penny Pritzker on issues related to Asia during President Barack Obama’s administration. In 1997, he co-founded the Asian Pacific American Legal Resource Center. He is a past president of the National Asian Pacific American Bar Association and a member of the ABA House of Delegates. He also served on the Commission on Racial and Ethnic Diversity in the Legal Profession.

“As I reflect on this award, the title that is most relevant to me today is that of immigrant. Not only am I an immigrant, but I was an undocumented immigrant. It was through the power of lawyers and laws that I got that path to citizenship, and I hold that dearly to my heart. I recognize what that means, and what that means for us to give back to our community, to make our country even stronger. I recognize what it took for my friends, my family, my mentors, my teachers, to help me succeed in this country. So when I think about this award and when I think about what it means, I think about what it means to give back, to help build structures that can help others, to make this country even better.”