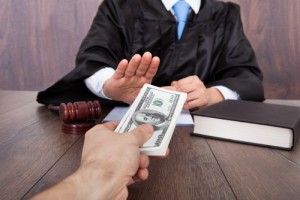 “Judges are not politicians, even when they come to the bench by way of the ballot,” Roberts wrote. “And a state’s decision to elect its judiciary does not compel it to treat judicial candidates like campaigners for political office. A state may assure its people that judges will apply the law without fear or favor—and without having personally asked anyone for money.”

Roberts applied an exacting scrutiny standard that allows restrictions on speech only if they are narrowly tailored to serve a compelling interest. Here, the Florida rule is “one of the rare cases in which a speech restriction withstands strict scrutiny,” Roberts said.

In her partial concurrence, Ginsburg indicated she would give states wide latitude in regulating campaign finances in judicial campaigns. Ginsburg would not apply exacting scrutiny to such regulations.

The ABA had filed an amicus brief urging the U.S. Supreme Court to uphold Florida’s solicitation ban, embodied in a judicial ethics rule that is nearly identical to a canon in the ABA Model Code of Judicial Conduct. Florida is among 30 states with such ethics rules, the ABA brief said. The ethics rule bars personal campaign-fund solicitations by judges, but allows judges to establish fund-raising committees. Roberts cited the amicus brief in his opinion.

A dissent by Justice Antonin Scalia, joined by Justice Clarence Thomas, argues that “faithful application of our precedents would have made short work of this wildly disproportionate restriction upon speech.” Justices Anthony M. Kennedy and Samuel A. Alito Jr. wrote separate dissents.

The case is Williams-Yulee v. Florida Bar. The petitioner, Lanell Williams-Yulee, was reprimanded and ordered to pay court costs for signing a mass-mail fundraising letter in 2010 while a candidate for a judgeship in Hillsborough County.