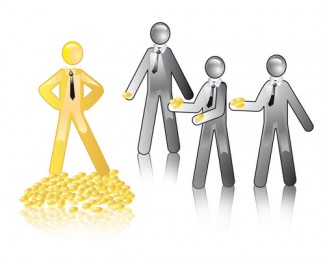 A study of Yale law students helps explain why economic inequality persists in the United States and why there are “populist insurgencies” in the presidential race, according to the study authors.

The study shows a gap between economic choices of the “extreme elite”—represented by Yale law students—and other groups in society. Ars Technica has a story, while two of the study authors warn in a Slate article that the findings foreshadow “a coming class war” in American politics.

The Yale law students overwhelmingly identified themselves as Democrats, yet they were more likely to make economic choices in a role-playing game that promoted greater wealth overall rather than equal distribution of the payout.

“Even when they self-identify as progressive Democrats, elite Americans value equality less highly than their middle-class compatriots,” according to the Slate article by two of the study authors, Yale law professor Daniel Markovits and Boston University economics professor Raymond Fisman.

The study, published in the journal Science, recruited 208 law students who attended Yale in 2007, 2010 and 2013. The researchers also recruited subjects from a broad cross section of Americans, and an “intermediate elite” made up of undergraduate students at the University of California at Berkeley.

The test subjects were asked to distribute a pot of money between themselves and another person, who is anonymous. Their choices would affect how much real money they got after the experiment.

At times, a subject’s decision to give away a dollar of his or her own money would result in only a dime going to the anonymous person. At other times, giving away a dollar contributed $10 to the other person. Sometimes the tradeoff fell between the extremes.

Test subjects who cared about efficiency responded to the price of redistribution, while a test subject who favored equality distributed the money evenly, even if less money was paid out overall.

About 80 percent of the law students had a focus that promoted economic efficiency, and therefore overall wealth, compared to about 50 percent of the broad cross section of Americans. The “intermediate elite” undergrads fell somewhere between the other two groups.

“Our results thus shine a revealing light on American politics and policy,” Fisman and Markovits write. “They suggest that the policy response to rising economic inequality lags so far behind the preferences of ordinary Americans for the simple reason that the elites who make policy—regardless of political party—just don’t care much about equality. …

“Democracy gives the mass of citizens a path for protest when the gap between ordinary views and a closed rank of elite opinion grows too great. The populist insurgencies that increasingly dominate the contests to select both the Republican and Democratic candidates in the upcoming presidential election show the protest path in action.

“Elites—in both parties—remain baffled by Donald Trump and Bernie Sanders’ appeal; and they prayerfully insist that both campaigns will soon fade away. Our study suggests a different interpretation, however. These bipartisan disruptions of elite political control are no flash in the pan, or flings born of summer silliness. They are early skirmishes in a coming class war.”