Studying for the bar? Put down the phone—or not 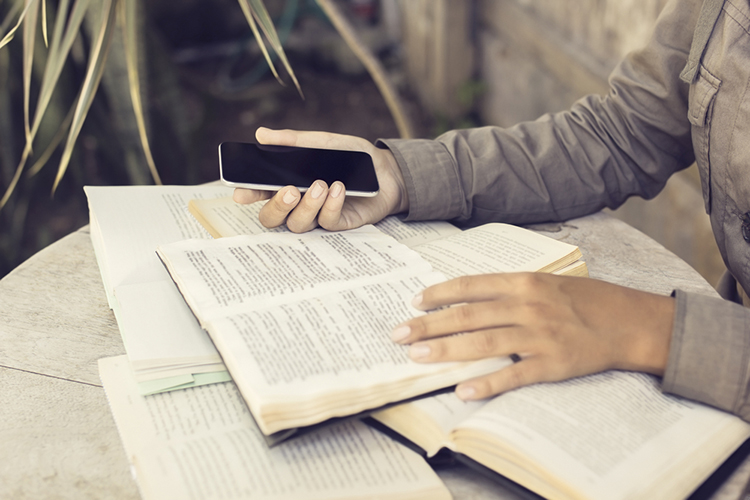 The days of attending bar review classes in person are waning, say law school deans, and recent graduates preparing for the bar now do a great deal of studying on smartphones with offerings like streamed lectures, flashcard apps and even YouTube songs devoted to thinking through statutes and case law.

Mike Sims, president of BARBRI, says that there’s no discernible pass rate difference for those who attend the lectures in person or rely mostly if not solely on online offerings. But he cautions against limiting bar prep to online study.

“Remember that while smartphones are modern, the bar exam is not. It’s still given on Scantrons and paper,” Sims says. “I think the smartphone is a really great addition to traditional books and paper-based learning, but don’t abandon the books and lectures.”

He describes bar exams as “large-scale memorizing” but notes that practicing lawyers no longer memorize everything, and, like recent graduates, often rely on smartphones for looking up information.

Rodney Fong, the associate dean for academic achievement, institutional assessment and bar preparation at John Marshall Law School, he has heard from students that they listen to BARBRI lectures while driving. According to him that’s not a successful strategy.

“I think with smartphones and this generation, there’s a misconception that they think they can multitask,” Fong says, adding that he’s seen people texting and shopping on Amazon while they listen to in-person lectures.

“Studies have shown that when you multitask, you are not doing anything efficiently,” he says.

At Mercer University School of Law, students are encouraged to attend bar review lectures in person, says Cathy Cox, dean of the Georgia school. Cox thinks that online offerings and apps are also useful. Her school teaches a bar prep course in the spring that includes digital flashcards, and Mercer has an online program that diagnoses where students have problems with bar exam questions.

“It behooves us all as legal educators to find the best tools our students can use that they will find both relevant and useful,” Cox says. “If it takes using phones and digital offerings to do that, certainly we owe it to them to make that possible.”

Pop culture, Cox adds, can help too. She mentions TMZ’s Behind the Bar podcast. In it, attorneys for the media group known for its celebrity coverage discuss how laws apply to celebrity exploits.

“It gets them thinking and applying things they learned in class, and we find that helps them retain legal concepts,” Cox says.

Cox also mentioned a YouTube channel by Mark DeAngelis, an undergraduate business law professor at the University of Connecticut who writes what he calls “Law Lessongs.” His repertoire includes “Take it Reasonably,” a song about negligence laws sung to the tune of The Eagles’ “Take it Easy.”

Another great thing about smartphones is that they give you the ability to study for the bar no matter where you are, says Betsy Brand Six, an assistant professor and director of academic resources at the University of Kansas School of Law. Six also is president of the Association of Academic Support Educators.

Six cautions that always studying in a comfortable place, like your couch, may not work as well as studying in locations where you are less comfortable, like a law library.

“When you take a bar exam, you are not in a comfortable place,” says Six, who thinks that apps and online offerings are helpful for bar review when used correctly.

“The bar prep companies give you all these tests and practice questions, which tell you how you did. I think that’s extremely valuable,” she says. “But if you don’t take the time to sit down and say: ‘Why did I get this question wrong, or right?’ you will not benefit from [the offerings] in a way that’s valuable.”

She adds that for now, there is no good way to practice writing answers to essay questions on a smartphone.

“Some students want more practice on the written portion of the exam, but there has not been an algorithm that reads your essay and scores it,” Six says.