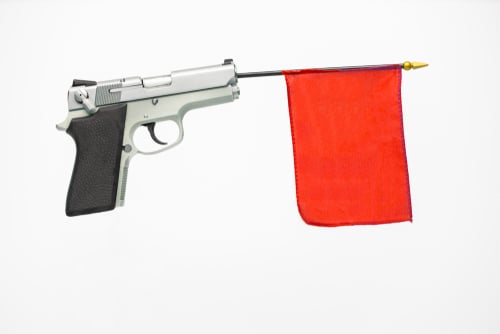 A lawsuit filed against family members of an 84-year-old Indiana man convicted of murdering his tax attorney claims they did nothing to stop him from carrying a gun even as his behavior became more bizarre.

The negligence and wrongful death suit was filed Thursday on behalf of Kevin Swanson, husband of slain Hobart, Indiana, lawyer T. Edward Page, report NWI.com and ABC7 Chicago. The defendants are family members of William “Bill” Landske, who was convicted of murder Wednesday. Landske is also a defendant.

The lawyer representing Swanson, Kenneth Allen, said at a press conference Thursday that the suit seeks to give teeth to Indiana’s red flag law. The law allows police to temporarily confiscate guns from people who are threatening to harm themselves or others, the Indianapolis Star reported earlier this month.

There is no need for a warrant, but the officer who seizes the guns has to submit a written statement to a judge explaining why the firearm owner is considered dangerous. The judge has 14 days to hear from the gun owner and review the case. The judge then decides whether police can keep the guns or whether they must return them.

“Gun violence has spiraled out of control in this country and needs to end; and our hope is we can help abate it by holding accountable those who know a family member is armed and dangerous, yet do nothing,” Allen said in a statement emailed to the ABA Journal.

The suit, filed in Lake County, Indiana, says Landske’s adult children “knew or should have known that Landske was demented, dangerous and constantly armed with a loaded handgun.”

The suit also alleges the children should have been aware that Landske intended to harm Page when they overheard Landske speaking with his late wife’s ashes before the murder. Landske told the ashes that it would all be over that day, the suit says.

The children failed to take the necessary steps to take the gun away from Landske, the suit says.

Indiana is among 17 states and Washington, D.C., that have red flag laws, though their details vary, according to the Giffords Law Center.

Landske shot Page last August when he went to the attorney’s home to pick up tax documents. Landske was angry because Page had sought several extensions of time to file the taxes, and Landske concluded the lawyer was procrastinating.

Landske’s defense lawyer had argued unsuccessfully at trial that the crime was committed in a sudden heat that made the offense voluntary manslaughter.

Page was a friend of Landske’s family and had worked on their taxes for free. He had recently submitted his retirement as a public defender and also worked as a senior traveling judge.