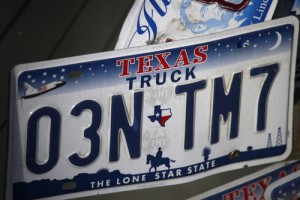 A district attorney in Texas will lose his “Hang Em” specialty license plates after the Texas Department of Motor Vehicles concluded they could be objectionable to the public.

Fannin County District Attorney Richard Glaser says he has had the plates for 35 years, KXII reports. He got the idea partly from the 1968 Clint Eastwood film Hang ’Em High.

Another driver appealing a plate cancelation had pointed to Glaser’s plates, spurring the review, Glaser said. The other driver had written: “How can the district attorney for Fannin County have ‘HANG EM’ and that not be threatening? Just wondering?”

Glaser’s second choice was “Geld Em” but that was also deemed objectionable. Now he’s applying for “DA 336,” which refers to the 336th District Court in Bonham, Texas, about 70 miles northeast of Dallas.

“It’s just a waste of time, I decided,” Glaser told KXII. “If they’re going to be that upset about it, I’ll just go ahead and get something more plain-vanilla.”