The North Face Sues The South Butt for Trademark Infringement 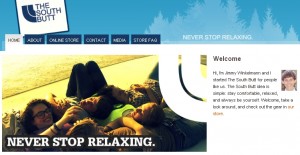 The North Face Apparel Co. has filed a trademark infringement suit against a teen who started a company called The South Butt to help pay for college.

The North Face’s tag line is “Never Stop Exploring” while The South Butt sells products with the tag line “Never Stop Relaxing,” according to the Associated Press. The South Butt’s founder, Jimmy Winkelmann, has said the fleece jackets and other clothing sold by his company are intended to mock people who wear brand-name clothing sold by outfitters like The North Face, the Missourian reports.

In The South Butt’s online disclaimer, the company distances itself from The North Face, concluding: “If you are unable to discern the difference between a face and a butt, we encourage you to buy North Face products.”

The Riverfront Times blog, the Daily RFT, posted a copy of the complaint. The suit, filed in the U.S. District Court for the Eastern District of Missouri, alleges trademark infringement, trademark dilution and unfair competition.

“Unfortunately and inevitably, The North Face’s success attracts opportunists seeking to pirate its famous trademarks for their inferior knockoffs,” the suit says. Winkelmann and his company “are marketing apparel that directly and unabashedly infringes and dilutes The North Face’s trade dress in its iconic Denali jacket.”

The suit says the defendants “may try to legitimize their piracy under the banner of parody,” but “their own conduct belies that claim.” It points to Winkelmann’s offer to sell his company to The North Face for $1 million, made after The North Face demanded an end to the sales of The South Butt’s products.

The complaint says The South Butt had more than $100,000 in sales in November.

“Little Jimmy doesn’t have enough money in his left pocket to pay for a six-pack of Coca-Cola much less” the demands by The North Face’s “silk-stocking law firms,” he said.

Law firms listed on the complaint are Bryan Cave and Greenberg Traurig.