Tougher, simpler bar-passage requirements for law schools to be considered by ABA committee 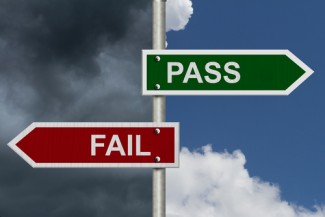 An ABA committee on Friday will take up a proposal that would toughen—and greatly simplify—the bar passage requirements of the law school accreditation standards.

Under the proposal, a law school would have to demonstrate that 75 percent of its graduates who took a bar exam within two years of their graduation passed.

Under the current standard, a law school can meet the bar pass requirement in one of two ways. It can show, as most schools do, that its first-time bar pass rate was no more than 15 points below the average bar pass rate for ABA-approved schools in states where its graduates took the exam. Or it can demonstrate, as some schools have resorted to doing, that 75 percent of its graduates who took a bar exam in three of the previous five years passed.

The proposed new standard would eliminate the first option altogether. It would keep the 75 percent bar passage rate from the second option but reduce the time frame for demonstrating compliance from five to two years. It also would require schools to account for all of their graduates. Under the current standard, a school needs to account for only 70 percent of its graduates.

The proposal would not relieve a school of its obligation to report and publish its first-time bar passage rates. But it would eliminate a loophole that now allows schools to exclude a group of test-takers known as “non-persisters”—graduates who fail a bar exam once and don’t take it again the next two times it is offered—from their calculations.

The section uses the bar passage standard to measure a school’s compliance with the requirement that it not admit students who do not appear capable of completing the school’s program and being admitted to the bar. Any changes in the standard are likely to be hotly debated. There are many who believe the current standard, which no school has failed to meet in many years, is too easy and should be higher. But there may also be schools that might have trouble meeting the proposed new requirements.

The situation is further clouded by the fact that not all states provide name-specific bar pass/fail information to test-takers’ schools, which derailed the committee’s last attempt to come up with a workable bar pass standard during its comprehensive review of the standards two years ago.

At its meeting in New Orleans, the committee will also consider two alternative proposals that would allow schools to admit students who haven’t taken the Law School Admission Test. One would require a school that uses an admission test other than the LSAT to demonstrate that the test is a valid and reliable indicator of a student’s ability to complete the program. The other would allow a school to admit a student without an admission test if the school can show that students with similar predictors have successfully completed its program.

The committee will also decide if it wants to change any of its previously recommended changes in the standards based on the comments it has received to date, including one that would do away with the current prohibition on students receiving academic credit for paid externships, which many clinicians oppose.