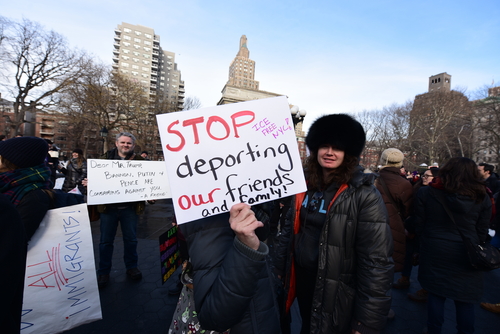 Protesters in New York City in February voicing support for immigrants and Muslims in light of Trump’s travel ban. a katz / Shutterstock.com

Darweesh et al v. Trump was brought in the first days after the executive order began taking effect, in response to its immediate enforcement at American airports. As the Yale Law School Worker and Immigrant Rights Advocacy Clinic explains, lead plaintiffs Hameed Khalid Darweesh and Haider Sameer Abdulkahleq Alshawi were detained right away at New York’s John F. Kennedy Airport. Alshawi was traveling on a visa permitting him to join his wife and minor child already living in the United States; Darweesh was traveling on a special immigrant visa, which is granted to Iraqis and Afghans whose lives are threatened because of their former employment with the U.S. government. (The ABA Journal’s September issue includes a feature story on special immigrant visas.)

A group of immigrant rights organizations including IRAP, the Yale clinic, the American Civil Liberties Union and the National Immigrant Law Center filed a lawsuit seeking to have them released, stay the executive order and stop the federal government from turning away other travelers with valid visas. The case resulted in an early order from a Brooklyn federal judge staying deportations nationally.

After the immediate need to stop deportations had ended, the plaintiffs asked the court to correct the invalid exclusions made in the earliest days of the travel ban. That effort resulted in a settlement on Thursday. The settlement requires the federal government to contact people who were barred from entry at that time and who have not reapplied for a visa or entered the United States since. The government must inform these people of their right to reapply and provide them with a list—in English, Arabic and Farsi—of legal aid providers who can help them.

Trump issued a revised travel ban some weeks later, which left out Iraqi nationals like Darweesh and Alshawi, but that too was challenged in multiple federal courts. One of those challenges will be heard by the U.S. Supreme Court in its 2017-2018 session. Currently, the order is not in effect as to certain people who come from the six remaining banned nations and who are related to U.S. citizens or residents. However, the order’s ban on all refugees is in effect. The federal government has also made an exception for holders of special immigrant visas. However, as the ABA Journal reported, in two incidents in March, U.S. Customs and Border Protection detained and attempted to deport Afghans with valid SIVs.