Trump's judicial nominees are the least diverse in almost 3 decades 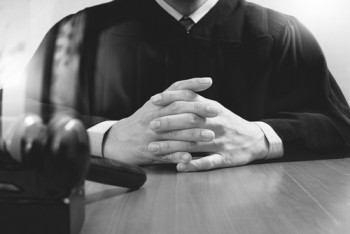 Corrected: President Donald Trump’s nominees for the federal courts are overwhelmingly white and male, reversing a trend that's lasted nearly three decades, an analysis by the Associated Press has found.

The AP looked at nominations for all lifetime appointments to federal judgeships, including International Courts of Trade, as well as federal district and appeals courts and the U.S. Supreme Court. Counting pending nominees, it found, 91 percent of Trump’s picks are white and 81 percent are male. Of the 58 nominees, 53 are white; three are Asian-American; and there is one African-American and one Latino.

That’s a sharp contrast to Trump’s recent predecessors, the AP says. In the first year of Barack Obama’s presidency, 31 percent of his confirmed nominations were white men compared with 67 percent for George W. Bush; 38 percent for Bill Clinton; 74 percent for George H.W. Bush and 93 percent for Ronald Reagan.

A White House spokesman told the AP that Trump is choosing nominees based on their qualifications alone.

“While past presidents may have chosen to nominate activist judges with a political agenda and a history of legislating from the bench, President Trump has nominated outstanding originalist judges who respect the U.S. Constitution,” says Hogan Gidley.

But past presidents had a different take, according to their former staffs. Alberto Gonzales, a past U.S. attorney general, told the AP that sometimes George W. Bush “would look at the list we gave him and he would say, ‘I want more diversity, I want more women, I want more minorities.’”

Because federal judges serve lifetime appointments, and because Trump has many vacancies to fill, the nominations have the potential to shape the federal bench for decades to come. Trump has also nominated judges rapidly, a marked contrast to his unusually slow nominations to executive branch agencies.

The lack of diversity may be criticized by people who believe the diversity of the federal bench should reflect that of the nation. Kyle Barry, senior policy counsel for the NAACP Legal Defense and Education Fund, told the AP that when the bench doesn’t look like the community it serves, “there’s a clear perception where the courts are not a place people can go and vindicate their civil rights.”

Corrected Nov. 17 to state that 53 of Trump’s nominees are white.