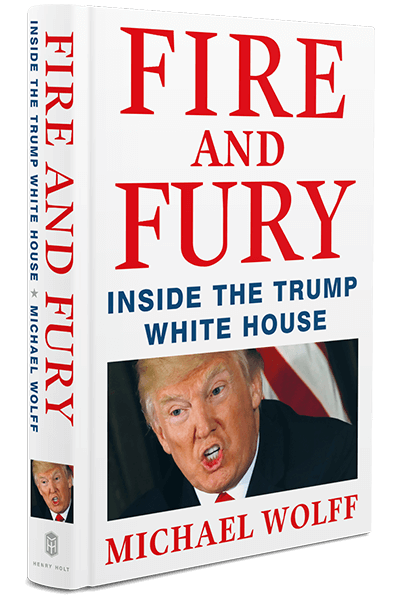 Updated: A prominent libel lawyer representing President Donald Trump has fired off cease-and-desist letters in an attempt to stop the scheduled release of an unflattering book on the president's administration, and to stifle Steve Bannon, Trump's former strategist whose derogatory comments in the book have infuriated the president.

Charles J. Harder, a California lawyer whose privacy lawsuit on behalf of Hulk Hogan pushed the Gawker media company into bankruptcy, wrote an 11-page letter to author Michael Wolff and Steve Rubin, president and publisher of Henry Holt & Co., demanding a halt of the release of the book Fire and Fury: Inside the Trump White House, the New York Times and Washington Post report.

Harder’s letter claims the book includes false statements about Trump that “give rise to claims for libel” and the possibility of “substantial monetary damages and punitive damages.”

It continues: “Mr. Trump hereby demands that you immediately cease and desist from any further publication, release or dissemination of the book, the article, or any excerpts or summaries of either of them, to any person or entity, and that you issue a full and complete retraction and apology to my client as to all statements made about him in the book and article that lack competent evidentiary support.”

CNN reports that the book will go on sale Friday – four days earlier than planned.

Excerpts of Wolff’s book have been published by New York Magazine and Reuters, and pages from advance copies have been circulating on Twitter and among the news media. Bannon is quoted as saying of Donald Trump Jr.’s and Jared Kushner’s meeting with Russians during the 2016 presidential campaign, “Even if you thought that this was not treasonous, or unpatriotic, or bad shit, and I happen to think it’s all of that, you should have called the FBI immediately.”

Harder says he is looking into possible defamation and invasion of privacy of the president and his family, ABC News reports. Harder previously represented Melania Trump in two libel suits against the British tabloid newspaper the Daily Mail, which were settled in April, the New York Times reported at the time.

ABC News reports that in his letter to Bannon, Harder said Bannon’s actions open him to legal claims for defamation by libel and slander, and are a breach of his “written confidentiality and non-disparagement agreement with our clients. Legal action is imminent.”

“Steve Bannon has nothing to do with me or my Presidency. When he was fired, he not only lost his job, he lost his mind,” Trump wrote in a statement printed in full by NPR. “Steve was rarely in a one-on-one meeting with me and only pretends to have had influence to fool a few people with no access and no clue, whom he helped write phony books.”

One First Amendment expert says Harder’s letters likely will have no impact other than for their news value.

“I wouldn’t worry too much about any judge granting prior restraint in this matter unless they’re not familiar with precedent or current law,” says Jonathan Kotler, a lawyer with broad experience in media law who teaches at the Annenberg School for Communication and Journalism at the University of Southern California, in an interview with the ABA Journal.

Prior restraint would only be granted if the book violated obscenity laws, endangered national security or if it were the only way possible to ensure a fair criminal trial for a defendant, he says.

“Beyond that, in the United States we allow publication and we punish afterward,” says Kotler. As for claims that Bannon breached contractual agreements on speaking, Kotler says Trump can sue for breach of contact.

Updated at 4:56 p.m. to include a link to the letter Charles Harder sent Michael Wolff and Steve Rubin; updated at 5:48 p.m. with the release date moved up to Friday.