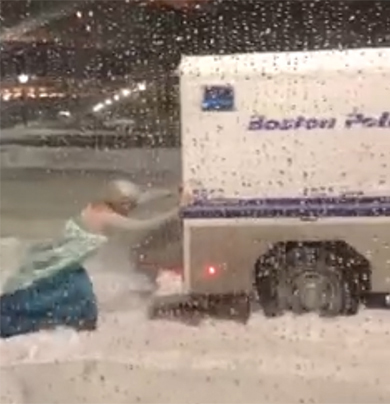 Screenshot from <a href=”https://www.facebook.com/ChrisBHaynes/videos/10160271060140089/?hc_ref=ARS6EkezuOmz7Ykvoeh4-aOyqP8i48rXQf6Z1dC6CLiHgJv24V4EtodzONtgEpSJQ18”“>Facebook video of lawyer Jonathan Triplett pushing the police wagon.

Attorney Jonathan Triplett was saving his costume of Queen Elsa from Frozen for a snowy day. Boston provided one Tuesday, when a nor'easter dumped more than 14 inches of snow at Logan Airport.

Triplett told BuzzFeed News that he wore the costume to a local bar for laughs. But they went national when Triplett, still dressed as the Disney character, was caught on video helping push a Boston Police Department vehicle out of a snowbank outside the bar. Another customer shot video, which has racked up 6.8 million views as of Thursday morning.

Triplett—the manager of attorney recruiting, training and development at Kirkland & Ellis in Boston, Above the Law reports—says he was sitting by the window with friends when they saw that a police officer who’d earlier come in to pick up food was having some trouble getting the wagon out of its parking spot because the wheels were spinning out. For a laugh, he says, Triplett went outside to help.

In the video, Triplett is not wearing a coat—perhaps the cold never bothered him anyway—but does seem to be wearing snow boots. He hikes up his dress at one point to get a better stance while pushing the van.

The Washington Post reports that some people commenting on the viral video are upset with other bar patrons for not helping. In the video, another man comes out to help, but ultimately stands back. Triplett told BuzzFeed that the man said he’d let Triplett have his moment.

Once the wagon is able to be driven away, Triplett takes a moment, curtsying several times to applause from inside the bar.

Next:
LawyerSmack is reinventing the way lawyers communicate