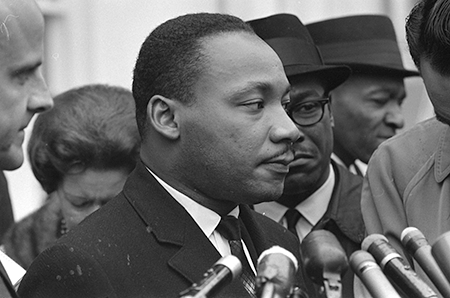 Martin Luther King Jr. addresses reporters after a 1963 meeting with President Lyndon B. Johnson. Image from the Library of Congress.

The voice of Martin Luther King Jr. carried through the ABA headquarters in Chicago during its celebration of the civil rights activist and leader, who would have turned 90 this week.

“Give us the ballot, and we will place judges on the benches of the South who will do justly and love mercy, and we will place at the head of the southern states governors who will, who have felt not only the tang of the human, but the glow of the Divine,” King said in a 1957 speech advocating for voting rights for African-Americans.

It’s a speech that led to the theme of Thursday’s celebration of King. Give Us the Ballot featured a discussion on voting rights with community organizer and political strategist Jonathan Todd; League of Women Voters of Illinois executive director Audra Wilson; and American Civil Liberties Union of Illinois director of communications and public policy Ed Yohnka.

Skip Harsch, director of the ABA Commission on Sexual Orientation and Gender Identity, moderated the panel. He asked them to consider where the voting rights movement is headed and what King would think of where we are today.

Todd say he thinks, as King did, that despite a challenging climate, there is more that binds Americans together than separates them.

“It’s amazing that you can sit here at work on a Thursday and have a King day celebration,” he says. 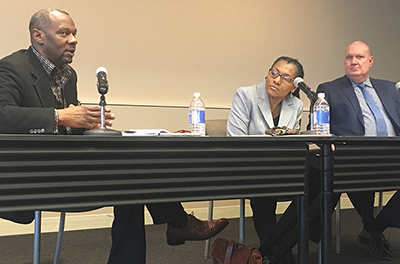 Jonathan Todd (left), Audra Wilson and Ed Yohnka spoke at the Give Us the Ballot event. Photo by Steve Rynkiewicz.

Wilson served as deputy chief of staff for U.S. Rep. Robin Kelly, D-Ill., for several years before joining the League of Women Voters of Illinois and came to know U.S. Rep. John Lewis, D-Ga., during that time.

She recalled that Lewis, another leader of the civil rights movement, was “masterful at putting things into perspective” and showing her how far the country has come, particularly at times when she felt overwhelmed as the only woman of color in a situation or room.

“I have to remember these people that came before, and I am here in only 50 years since [King’s] assassination,” Wilson says. “That’s how I like to look at it.”

Yohnka also shared an anecdote about Lewis. A few weeks before the 2018 midterm elections, he attended an event with the congressman, who left him speechless when he thanked him for his work with the ACLU.

“One of the things he said was that when he thinks of voting rights, he’s optimistic,” Yohnka says. “And he still has scars—if he can be optimistic, so can I.”