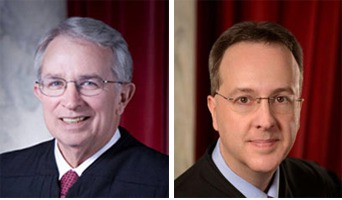 The West Virginia Supreme Court of Appeals will have only three justices available to hear cases after one was suspended following an indictment and another announced his retirement in a two-sentence letter on Wednesday.

Justice Menis Ketchum, 75, said his retirement would be effective July 27, report the Charleston Gazette-Mail, the Associated Press and West Virginia MetroNews. He announced his retirement a day before West Virginia lawmakers were to begin discussing whether any justices should be impeached.

The impeachment proceedings follow an audit report that found Ketchum and now-indicted Justice Allen Loughry used state vehicles for personal use without claiming the benefit on their federal tax forms. A second audit said another justice, Robin Davis, used a court vehicle seven times without listing a business purpose for the trips, according to May coverage by MetroNews. Davis remains on the court.

The audit said Ketchum had received permission from his fellow justices in 2012 to use the state car to commute from his home, and also used a state fuel card to buy gas, according to a prior story by MetroNews. On five occasions, Ketchum used the car to travel to golf outings in Virginia. Ketchum stopped using a state vehicle in 2016, but sought mileage reimbursement for his commutes, the audit said.

Ketchum is not facing any criminal charges or formal ethics charges. But Loughry was indicted last month on federal charges based on allegations that he used a government vehicle and credit card to buy gas on personal trips, lied about his involvement in pricey renovations at the court, and used a state-owned antique desk at his home.

The charges against Loughry include fraud, lying to federal agents and trying to influence the grand jury testimony of a court employee.

West Virginia Supreme Court justices are paid $136,000 a year, according to the prior coverage.