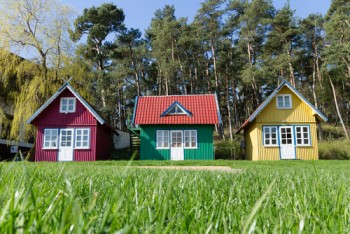 Tiny-house buyers have to cope not only with the challenges of living in a smaller space. There are also zoning regulations that make it difficult to find a spot for the homes.

In densely populated areas and most other areas, zoning regulations typically don’t allow full-time living in temporary structures such as RVs or movable tiny houses, the New York Times reports. The zoning laws also may specify a minimum lot size that it too expensive for a tiny-house buyer.

Some municipalities—including Fresno, California, and Nantucket, Massachusetts—have changed their zoning laws to accommodate homes that share land with existing homes. In another nod to the tiny house movement, the International Code Council has adopted a model code for such structures.

But change is slow. Andrew Morrison, a home builder and proponent for tiny homes, tells the Times that “easily upwards of 90 percent of tiny-house owners are living illegally, when it comes to zoning.”

Some turn to RV parks for their tiny homes, but many have limits on the length of stay, Morrison says. Many park their homes in the backyard of a friend or family member in hopes that no one will complain. Others park on land in a country setting, where zoning and enforcement are looser.

Brianna Welch hoped to locate her tiny home near the University of Vermont, where she will attend graduate school. The year-round RV park was full, and she and her husband encountered difficulties when a lot owner offered to rent to them. The town required installation of a septic system, which would cost about $18,000, and payment of an $8,000 impact fee.

“We knew [finding land] would be the hardest part,” Welch said, “but I didn’t think it would be this hard.”