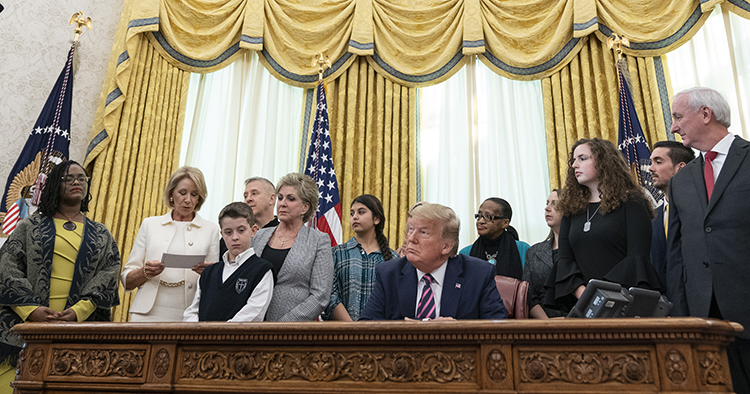 President Donald Trump listens as Secretary of Education Betsy DeVos speaks during the announcement of the guidance on constitutional prayer in public schools Jan. 16 in the Oval Office of the White House. Official White House photo by Tia Dufour.

President Donald Trump announced this month that his administration would make it easier for public school students and teachers to pray on campus, and remove federal funding restrictions for religious groups that provide social services.

Trump made his Jan. 16 announcement from the Oval Office in the presence of Betsy DeVos, the U.S. Secretary of Education, and several students from around the country, the Washington Post reports. On the same day as Trump’s announcement, the Department of Education released a proposed five-point rule that DeVos says will protect religious liberty for students, teachers and faith-based institutions. The proposed rule is out for notice and comment, with a mid-February deadline to respond.

“The department’s efforts will level the playing field between religious and nonreligious organizations competing for federal grants, as well as protect First Amendment freedoms on campus and the religious liberty of faith-based institutions. I proudly share President Trump’s commitment to religious freedom and the First Amendment,” DeVos said in a Jan. 16 news release.

Some lawyers question what if any protection would be offered to students not associated with faith-based groups, or those who identify as LGBT.

“When you encourage and do things called ‘protecting religious rights’ in the way that this administration is doing it, as opposed to the way that the Constitution requires, what you’re really doing is protecting the rights of the majority to impose their views on the minority,” says Richard B. Katskee, legal director of Americans United for Separation of Church and State. He is also special advisor to the religious freedom committee of the ABA’s Section of Civil Rights and Social Justice.

Experts also argue that language in the proposed rule is ambiguous and could require public universities to support religious-based organizations that prohibit membership based on beliefs. Additionally, they say the rule could ease requirements for determining if an educational institution is controlled by a religious organization, which could allow opting out of Title IX of the Education Amendments of 1972—which prohibits schools that receive federal funds from discriminating based on gender. Finally, they warn the rule could remove Obama administration requirements that faith-based groups receiving federal and state-administered grants must include a mandate that explicit religious activity take place outside of programs that are federally funded.

“The thing that worries me are claims that this proposed rule would allow for faith-based institutions to be treated equally and on the same terms as secular institutions. But what it actually means is that there would be more religious exemptions from otherwise neutral rules,” says Erin Buzuvis, a law professor at Western New England University, who writes at Title IX Blog.

He mentioned Christian Legal Society Chapter v. Martinez. The 2010 U.S. Supreme Court decision involved University of California’s Hastings College of the Law in San Francisco and a national organization with membership requirements that include believing in Jesus, and not taking part in “unrepentant homosexual conduct.”

Because Christian Legal Society membership requirements violated Hastings’s nondiscrimination policy, the law school would not recognize a local chapter. That decision did not violate the First Amendment, the Supreme Court found in a 7-2 opinion.

University of Missouri law professor Carl Esbeck sees things differently. According to him, the department’s proposed rule centers on the U.S. Constitution’s free exercise clause, which is different than the First Amendment focus of the Hastings case.

“Whatever the court says about free exercise, it doesn’t change freedom of speech,” adds Esbeck, who also argues that the Hastings case was undermined by Trinity Lutheran Church of Columbia v. Comer, a 2017 Supreme Court decision where the majority found that excluding churches from neutral, secular aid programs violated the free exercise clause.

Comer involved a church-operated preschool that was denied a Missouri Department of Natural Resources grant to resurface the playground with recycled tires on the basis that the state constitution prohibits state money aiding churches.

The department’s release of the proposed rule may be premature, according to Esbeck, because there’s a pending U.S. Supreme Court case involving religious freedom and private schools.

That matter, Espinoza v. Montana Department of Revenue, involves a state needs-based scholarship program for children to attend private schools of their choice, including religious schools. In 2018, the Montana Supreme Court found that the program violates the state constitution, which prohibits state government from directly or indirectly using public funds to pay groups controlled by a church.

“The Espinoza case is about a religious school, and that’s much more similar to faith-based social services providers than a playground resurfacing,” says Esbeck, whose academic works centers on church-state relations and religious liberty.

Other pieces of the proposed rule include revising the Strengthening Historically Black Colleges and Universities Program with more specific prohibitions on activities or services that constitute religious instruction, worship or proselytization. It also adds language that requires a court finding of First Amendment violations before the agency makes free speech determinations.

“I think that sectarian colleges are going to embrace this rule, and secular schools will find them to be somewhat intrusive,” says R. Craig Wood, a partner with McGuireWoods whose clients include higher education institutions and school boards.

If the department adopts the proposed rule, he doubts that many colleges owned by religious institutions will make existing rules more restrictive. Sometimes, Woods adds, there’s a tension for sectarian schools between what their alumni want and what attracts new students.

“We have a declining higher-ed student population, and there’s greater competition for students. Economic forces push schools toward being more open and inclusive,” Wood says.

But he adds that at many faith-based institutions, alumni and donor groups watch to see whether the school is consistent with their faith-based beliefs in the professors they hire and the students they admit. “Schools have to be responsive to that, out of economic reality.”

Previous:
Assistant public defender: ‘I just personally like to give back’

Next:
Why elder law is a growing, 'anything-can-happen practice'