On a hot day in June 2019, Oregon Supreme Court Justice Adrienne Nelson stood up and made a promise to her community.

“This is going to be a place where students know they are enough, and they can build from that and grow from that and become the wonderful human beings they are designed to be,” she said during the ground-breaking ceremony for a new high school in Happy Valley, a suburb of Portland.

She also promised to be a frequent visitor at the high school—the Adrienne C. Nelson High School—after it opens in fall 2021. It is named for Nelson, the first African American to sit on Oregon’s highest court and on any of its appellate courts.

In the months since the ceremony, Nelson has brought her family back for tours of the construction site. She signed the last beam and met with the new principal. She has been asked for her opinion on the mascot and colors, and been involved in selecting the artist who will create an image of her in the school.

And perhaps most important, she met its students.

“It’s been a full-circle experience for me because education opened the world to me,” Nelson says. “When I got to address the students, I had an opportunity to let each one them know—you matter.”

Nelson grew up in a small town in southwest Arkansas, where her family lived next to her grandparents and near her great-grandmother. She took dance classes, became a voracious reader and planned to be a pediatrician.

She excelled academically and by her senior year was at the top of her class. But instead of being named valedictorian, she heard from a white classmate that the school district didn’t want to give her the honor.

“It was overwhelming and devastating,” she says.

Her mother, who was a teacher, hired civil rights lawyer John W. Walker and threatened to sue the school district. Nelson eventually became the first African American valedictorian of her high school but remembers being shaken by the experience.

“I found myself in a controversy not of my making but based on racial bias and stereotypes,” she says. “I made a decision that I would not be reduced by that experience nor let anyone define me.

“Instead, I would meet people where they are and build community wherever I live.” 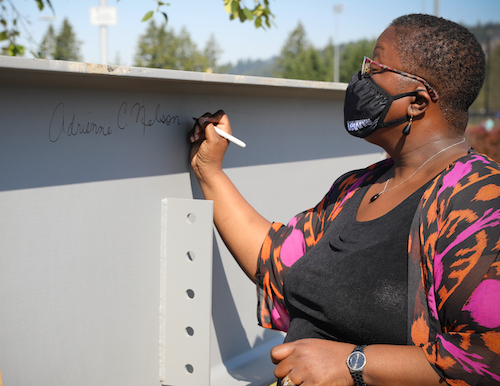 “It’s been a full-circle experience for me because education opened the world to me,” Adrienne Nelson says. “When I got to address the students, I had an opportunity to let each one them know—you matter.” Photo by Brian McGrew.

After graduating from the University of Texas School of Law, she moved to Oregon. She had gotten married and had a daughter and wanted to be close to her mother and stepfather, who lived near Portland.

Nelson started her legal career as a public defender with Multnomah Defenders Inc. She also worked as an associate with Bennett Hartman Morris and Kaplan, and a senior attorney/coordinator at Portland State University’s Student Legal and Mediation Services.

Ellen Rosenblum was a judge on the Multnomah County Circuit Court when she met Nelson.

“She is very warm, very engaging,” says Rosenblum, who is now Oregon’s attorney general. “She has these personal traits about her that made her an exceptional trial lawyer. I remember thinking to myself, Wow, I want to get to know this person.”

She joined the ABA in 2001, becoming a member of its Minority Caucus and the Oregon State Bar delegate to the House of Delegates.

During this time, Nelson became close to Mercedes Deiz, the first Black woman to both practice law and serve as a judge in Oregon.

She recalls that Deiz, who had retired in 1992, surprised her in her office one day before they were supposed to meet for lunch. She told Nelson she hoped she lived long enough to see her on the bench.

“I didn’t know what to say,” Nelson says. “I had never considered becoming a judge. She was the first person to say that to me.”

After Deiz died in 2005, Nelson remembered that conversation. When a seat opened on the Multnomah County Circuit Court, she put in her name and was appointed the following year.

“I talk about her all the time, because there are generations who don’t know her,” Nelson says. “She didn’t get to see me on the bench, but she planted that seed.” 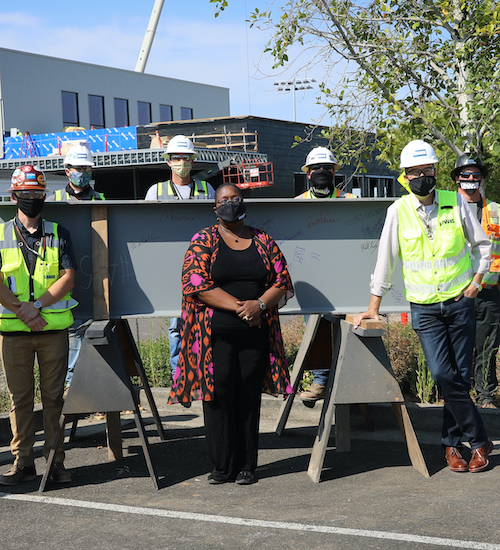 In the months since the ground-breaking ceremony for a new high school in Happy Valley named after her, Adrienne Nelson has brought her family back for tours of the construction site. She signed the last beam and met with the new principal. Photo by Brian McGrew.

Nelson followed the lead of Deiz and other people of color who were creating community. She became even more visible in Portland, joining the Reed College Board of Trustees, Literary Arts Board and Oregon Community Foundation’s Metropolitan Portland Leadership Council.

“Portland is a different place because Adrienne moved here and you could get dozens and dozens of people who would tell you that,” says Katherine O’Neil, one of Nelson’s mentors.

In considering the jurist’s contributions, O’Neil highlights one in particular: her work as chair and advisory board member of Girl Scouts of Oregon and Southwest Washington’s Girl Scouts Beyond Bars, a program serving girls whose mothers or grandmothers are incarcerated.

“Adrienne has quite a lot of other things running, including those high-flying boards, but she makes sure this gets done,” says O’Neil, a member of the ABA Journal Board of Editors. “That’s an example of the real Adrienne. She is seeing that little girls and their mothers have a chance that they wouldn’t otherwise.”

In recent years, Nelson has stepped into more ABA leadership roles. She became the Oregon delegate to the House of Delegates and chaired its Steering Committee of the Nominating Committee and Credentials and Admissions Committee.

Nelson became interested in the Oregon Supreme Court when she realized it would allow her to think and write extensively about important issues, including the rule of law. She was appointed in January 2018 and elected to a six-year term that November.

Before she began her campaign, Nelson was asked if her name could be submitted to the North Clackamas School District, which was considering names for its new high school. She agreed, but in May 2018, the school board voted against using her name and the name of former Oregon Symphony director James DePreist, who was also Black.

“I remember sitting in my vehicle and thinking it’s been 30 years since I’ve been to a school board meeting, and I’m still in the middle of a controversy because of race,” Nelson says. “I had to really reflect on that.”

The following year, she heard there had been a school board composition change and her name would be considered again. That time, its members voted in favor of naming the high school after her.

Libra Forde, the chief operating officer for Self Enhancement, Inc., a nonprofit that serves children and families, was on the committee that recommended Nelson’s name. She knew Nelson from her service on SEI’s board and saw her as “the perfect person to be on the top of the school, who would show up for that school.”

“Those kids would have a living human being who could inject things into them right now that could change our entire nation, potentially,” says Forde, now a member of the district’s school board. “It was powerful when the board finally said yes, this is what we are going to do.”

Nelson spoke publicly about the controversy for the first time at the high school’s ground-breaking.

“I think that’s important for people to know and to remember, because we have to remember everything,” she said. “Not just the pretty parts, but the hard parts, the struggle. Because it makes for who we are.”