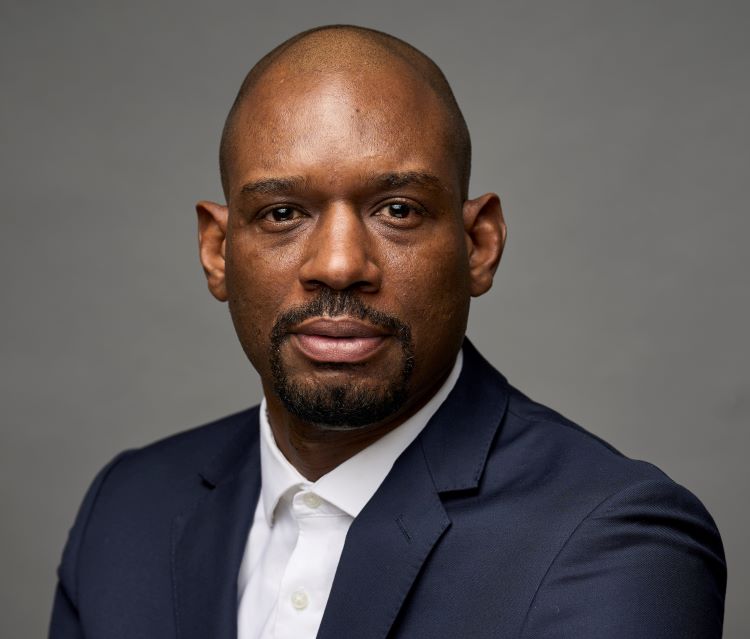 “Once I came home, I would constantly see people unemployed who I had sat in the law library with,” says Devon Simmons. “These individuals have legal expertise, but they’re not given the opportunity to utilize it. What if I could create a platform in which I could make that happen?”

Devon Simmons, co-founder and project director of a new program helping those with past convictions find work as paralegals and other jobs in the legal profession, says there’s a wealth of untapped legal talent among formerly incarcerated people.

Simmons was convicted of first- and second-degree assault and criminal possession of a firearm after he shot another man when he was just 17. He still remembers what it felt like to thumb through his court transcripts, go to the prison law library and file his own petitions as he fought his case.

Simmons emerged from prison 15 years later. By that time, he was a product of the John Jay College of Criminal Justice’s Prison-to-College Pipeline program and later graduated with a bachelor’s degree in criminal justice. For his work on criminal justice reform, he was named a 2017 David Rockefeller Fund Fellow, a 2019 Soros Justice Fellow, a Senior Atlantic Fellow, and he is a former founding member of the Canary Impact Fund, a group that funds organizations and initiatives working to reduce the rate of imprisonment.

“Once I came home, I would constantly see people unemployed who I had sat in the law library with,” Simmons says. “These individuals have legal expertise, but they’re not given the opportunity to utilize it. What if I could create a platform in which I could make that happen?”

Fast-forward to 2022. The Paralegal Pathways Initiative, which Simmons co-created with law student Meg Gould, officially launched this year at the Center for Institutional and Social Change at Columbia Law School in New York.

The 14-week program began in the spring term and has seven participants. It teaches them to build on the legal skills they learned in prison, including legal ethics, tech and interview skills. The goal is to place graduates of the program in jobs or one-year paid fellowships at public defense groups such as the Bronx Defenders and the Neighborhood Defender Service. Though some may pursue positions as paralegals, Simmons says the wider aim of the program is to get them other jobs in the legal field or help them go to law school.

In 2008, the unemployment rate among formerly incarcerated people was 27.3% compared to 5.8% in the general population, according to the Prison Policy Initiative, relying on the most recent available data.

If they do find work, many former prisoners take low-paying menial jobs, Simmons says. He hopes the program will lower the barriers to well-paid work. 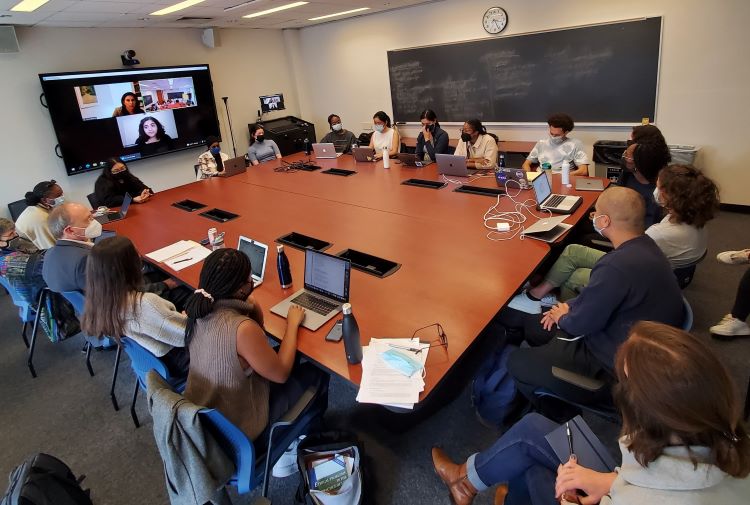 In 2018, Attorney Jonathan K. Gitlen, former director of the American Bar Association’s Clemency Representation Project and an expert on collateral consequences, advised the mayor’s office in Washington, D.C., as it created a similar paralegal training and job placement program housed at Georgetown University.

The program, which went on hiatus but relaunched in 2021, was a partnership with the Washington, D.C. Mayor’s Office on Returning Citizen’s Affairs and placed nine graduating participants with law firms in D.C. It will accept applications for a third cohort this year.

The stigma attached to having a criminal record and the nature of the crime committed are barriers to finding work as a paralegal, Gitlen says. For example, fraud or some other financial crime could automatically rule out people hoping to find work at law firms. The barriers for entry may vary from state to state, the attorney adds.

For example, North Carolina prevents people from obtaining certification as paralegals if they have been convicted of a “criminal act that reflects adversely on the individual’s honesty, trustworthiness, or fitness as a paralegal” or were “engaged in conduct involving dishonesty, fraud, deceit, or misrepresentation,” according to state standards for certification.

In Texas, certain “serious crimes” prevent certification, including any felony and “offense involving dishonesty, misappropriation of money or other property or conduct that adversely affects the administration of justice; and any attempt, conspiracy or solicitation of another to commit any of the foregoing crimes,” according to the Texas Board of Legal Specialization.

Other barriers are internal. Some people carry the shame of a previous conviction. The D.C. program encouraged participants to hold themselves accountable and own their criminal history, rather than shy away from it, Gitlen says.

“The more important component is to showcase people who are returning citizens to show that they actually can do these jobs. That’s what the benefit of the D.C. program was—so more people can say, ‘I’ve worked with someone who had been incarcerated before and they were fantastic,’” Gitlen says.

Simmons says Columbia law students helped design the curriculum with their faculty advisers and participated in the class. He wanted to create an environment in which law students learn from the formerly incarcerated participants and vice versa. There are 16 students in the program. Simmons hopes it will give the students greater insight into the criminal justice system before they begin their careers. 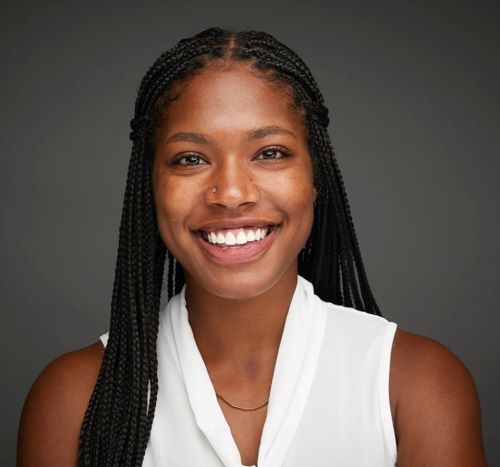 Corine Simone Forward, the student director of the Paralegal Pathways Initiative. “They know how to strategize and what to argue and what not to argue. And so we’re kind of feeding off of each other in that way,” Forward says.

Corine Simone Forward is the student director of the Paralegal Pathways Initiative. Her father was once incarcerated, and she believes that students are already seeing the benefits of learning side-by-side with people who have a lived experience in the criminal justice system.

Students might know the ins and outs of Westlaw and LexisNexis, Forward contends, but the program gives them a chance to learn from people who already have legal skills, know how to represent themselves and file their own motions.

“They know how to strategize and what to argue and what not to argue. And so we’re kind of feeding off of each other in that way,” Forward says.

She notes that the program not only tries to place participants in paralegal jobs but also offers a path to law school and other “legally adjacent” jobs, including public policy work.

The program was created in the fall of 2019 and the curriculum was refined the following year. In 2021, Simmons piloted a 12-week fully virtual program with several former prisoners acting as co-designers. The program officially launched in 2022 in person.

Cassandra Owens was one of the co-designers. She completed the pilot program and found a job as a program associate at the Reform Alliance, an advocacy group lobbying to change laws on probation and parole.

Owens, a former general practice attorney who says she was disbarred after a conviction for wire fraud, believes that without the program and Simmons’ support she would never have landed the job.

“When you go through the prison system, through trial, incarceration, you’re just crushed. You slowly lose your hope—even your identity. So it just gave me so much confidence knowing there are individuals who do want to hire you,” Owens says.

Funding got the pilot program off the ground. In 2021, the international law firm Clifford Chance awarded the initiative $70,000 in funding and 500 hours of pro bono support for its work addressing racial injustice. The New York office of the law firm Gibson Dunn is also offering LSAT support to people in the program who want to go to law school.

In 2021, the American Bar Endowment awarded the program an opportunity grant of almost $20,000.

American Bar Endowment Executive Director Joanne Martin says the Paralegal Pathways Initiative won the award because it engages with underserved and underrepresented communities and the legal profession in New York, and it offers a learning experience for law students.

“It was an innovative program that could be replicated elsewhere,” Martin adds.

Simmons says the program is seeking long-term funding from law firms, donors and foundations. He does not know of any other programs focused on student and participant interaction, but he hopes other law schools will take a similar approach.

“One of the goals of PPI is to inspire other law schools to interact with the communities they serve. If you’re not interacting with people in the community, then you’re in a bubble,” Simmons says.