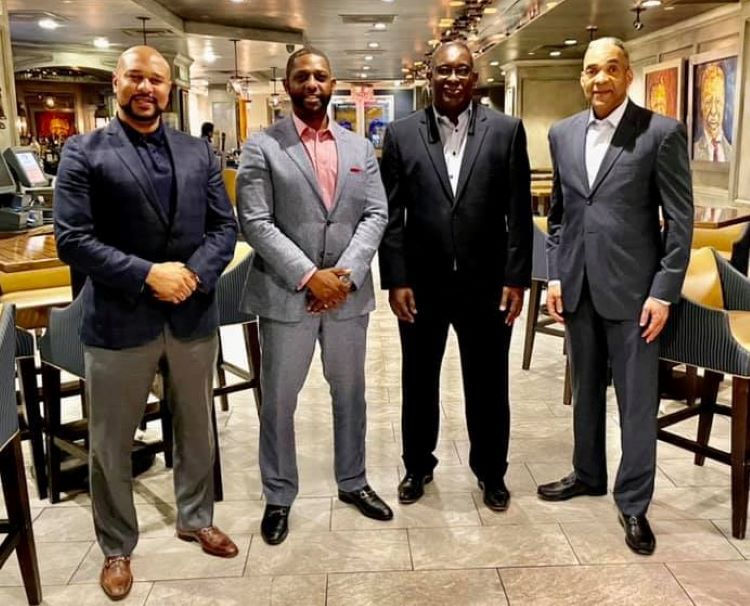 For the first time, the current presidents of the four leading legal associations are minorities. Pictured are Judge Carlos Moore (from left), Navan Ward Jr., Douglas K. Burrell and Reginald Turner. Photo courtesy of the American Association for Justice.

For the first time, African Americans are leading four major national bar associations at once.

The other leaders are Reginald Turner, president of the American Bar Association; Navan Ward Jr., who heads the American Association for Justice; and Judge Carlos Moore, who leads the National Bar Association, an organization of predominately Black judges and lawyers that was formed in 1925 because at that time they could not join other major bar associations, including the ABA.

For the four men, it’s a moment to savor but also a chance to reflect on the work that still has to be done.

Ward, an Atlanta trial lawyer with Beasley Allen, is the second Black lawyer to become president of the AAJ, an organization for trial lawyers. The last time that happened was 25 years ago. Although February is Black History Month, Ward says the push for diversity in the profession cannot be “relegated to the shortest month of the year.”

“This has taken centuries to have minorities in the place that they are. It has to be a constant effort,” Ward says.

In the ABA’s 144-year history, Turner is its fourth Black president. He says having four Black leaders at the helms of their respective associations is a “once in a lifetime” moment, and one he hopes is repeated.

“In the future, maybe there’ll be four women running major bar associations or Latinos. There’s still many barriers to break,” Turner says, adding that supporting diversity in the legal profession is his passion and “in my DNA.”

Having four Black leaders sends a message that “opportunity is open for everyone,” says Burrell, the third Black president to head an association that advocates for civil defense attorneys representing businesses and their employees. But he says more needs to be done to advance opportunities for Black and women lawyers and other minority groups, so they are not marginalized.

“Once people started valuing diversity, then it took time for African-American leaders to engage with these organizations in enough numbers so we could move up through the ranks,” Burrell says.

Moore is the National Bar Association’s 79th president. He believes the murder of George Floyd and the “racial reckoning” that followed paved the way for this moment.

“It’s important for us to continue to decry blatant and overt racism and to show that Black men can lead at the highest level of the most prestigious bar associations,” Moore says.

He says the National Bar Association plans to enter into a memorandum of understanding with Ward and the AAJ in the spring as part of an initiative to recruit more diverse members. The four leaders have also discussed how they can lobby Congress for voting rights and policing reform. This past September, they gathered in Washington, D.C., to discuss their plans and will meet again in March.

“Across the board, whether its solo and small firms, corporations, large firms, we need more Black lawyers—period,” Moore says.

A lot has changed since the early 1900s when the ABA’s Southern white delegates protested the membership of Black lawyer William H. Lewis. The ABA ousted him after he refused to resign.

“The ABA’s early history with lawyers of color is regrettable,” wrote President William G. Paul in the pages of the Journal in 1999. “After three African-Americans, including U.S. Assistant Attorney General William H. Lewis, joined the ABA in 1911, their memberships were rescinded when their race became known, leading to a resolution ‘that all applications … shall state the race and sex of the applicant.’ It was not until 1943 that the ABA rejected the ban against Black lawyers and the first one was admitted in 1950.”

In 2003, Dennis W. Archer became the ABA’s first Black president, after serving as president of the State Bar of Michigan and president of the National Bar Association. That’s the same path Turner followed before becoming ABA president in 2021.

President-elect Deborah Enix-Ross will be the second Black woman to head the ABA when she takes over in August. At the Midyear meeting in February, Mary Smith became the first Native American to become ABA president-elect nominee.

Archer mentored Turner, who also clerked for the former president during the 1980s when Archer was a justice on the Michigan Supreme Court. He describes the moment when he saw his mentor become ABA president as “transformative.”

“It’s not quite as dramatic as Rosa Parks refusing to give up her seat on the bus, but it was certainly a transformative moment for the American Bar Association; just as the Montgomery Bus Boycott was a signal to this nation that it needed to reform,” says Turner, referring to the political protest that followed Parks’ arrest in 1955.

But the ABA’s most recent survey data in its 2021 Profile of the Profession supports the notion that progress toward increasing diversity in the legal profession is slow-moving. There are more than 1.3 million lawyers in the United States. About one-third of all lawyers, or 37%, are women. In 2011, 11.7% of the profession were lawyers of color, compared to 14.6% in 2021. That 3% increase shows the legal industry has “been very slow to diversify by race and ethnicity over the past decade,” the report states.

Furthermore, the report found white men and women were overrepresented in the profession and Black, Hispanic, Asian, and Native Americans were underrepresented.

Diversity in U.S. law firms has increased at a glacial pace. Year by year, progress in this area “is almost imperceptible,” according to the report. In 2009, 6% of partners in law firms were Black, Hispanic, Asian, Native American or mixed race. By 2020, 10.2% of all partners were lawyers of color.

A focus on improving the representation of minorities in the legal profession was one of Ward’s goals when he became the AAJ’s 75th president. In the fall of 2021, the AAJ launched a diversity initiative called the Member Firm Pledge to Act.

The initiative offers support to member law firms to recruit, retain and promote minority lawyers. He says the pledge was based on initiatives he saw work at Beasley.

“My firm has valued minority attorneys because they help our firm better represent all of our clients. We hope more plaintiff law firms will do the same,” Ward says.