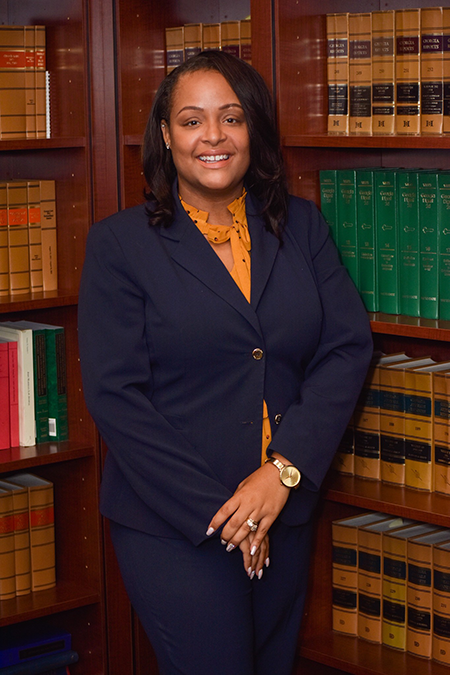 One summer during high school changed everything for LaToya Bell.

She got involved with United to Save Ourselves, a nonprofit organization in Phenix City, Alabama, that helped teenagers find their first jobs. She was paired with Russell County Circuit Court Judge Michael Bellamy, who put her to work drafting documents, doing research and observing hearings in his courtroom.

He became her mentor, her godfather and the reason she decided to be a lawyer.

“I saw defendants from a human perspective, because that’s the type of man that he was,” Bell says. “He wanted to see people for who they were and not for what they have done. That made me want to be a part of this.”

Now an assistant public defender in Houston County in Georgia, Bell handles as many as 200 to 250 cases at any time involving misdemeanors and traffic offenses in state court. She has earned her own reputation for being hopeful for her clients—hopeful not only that justice is served, but that she can in some way improve their lives.

In recent years, Bell played a significant role in launching the first drug court in Houston County and establishing a wills clinic that prepares estate planning documents for local first responders and veterans. She also regularly volunteers at a record restriction clinic, helping clients who have been convicted expunge their criminal records.

Terri Benton went to law school with Bell and nominated her for the ABA Government and Public Sector Lawyers Division’s Dorsey Award, an honor she received at the annual meeting in August for serving as an outstanding public defender.

“She just really has a heart for people and using her skills to help make someone else’s life better,” says Benton, the general counsel for First Performance and FAS Capital in Atlanta and Macon, Georgia, respectively. “She feels as much as she received an opportunity to be an attorney, she should give that much more back to the community she serves.”

Bell was raised by a single mom in Columbus, Georgia, a city on the state’s border with Alabama.

During her time at Mercer, Bell also served as a legal intern with the Federal Defenders of the Middle District of Georgia, a nonprofit corporation that represents indigent people who are accused of federal criminal offenses. She joined the Houston County Public Defender’s Office in 2013 and handled felony charges in the superior court for about four years before moving into her current role.

Angie Coggins, the county’s chief assistant public defender, remembers serving as second-chair for Bell on one of Bell’s first felony cases. It involved a young man who had been charged with armed robbery over the theft of a money box from a gym.

Bell went to the gym, examined the layout and talked to the staff. As a result, Coggins says Bell determined that her client took the box without showing his gun. Since he showed the weapon only as he left the gym, she helped get the charge dropped to aggravated assault.

The young man’s family sent both Bell and Coggins a peace lily after the trial to thank them.

“LaToya loves what she does,” Coggins says. “With public defenders, people have such misperceptions and you get the shaft because people don’t even think you’re a real lawyer. … So it cracks me up when you see someone like her who came to this and every ounce of her believes in what she’s doing.”

Bell says it’s hard to imagine a more fulfilling job in the legal field than being a public defender, especially since she helps people in ways she doesn’t always expect.

“A lot of lawyers probably say that, but this is just a different type of fulfillment because, especially in the public defender line of criminal defense, it’s so thankless,” she says. “People say, my god, there is someone who is defending people who they don’t count worthy of defense or worthy of any type of respect.

“I am grateful that I can give that to them, to call them by their name and not just by their sentence.”

In the several summers Bell spent with Bellamy in the Russell County Courthouse, she saw the positive impact its drug court had on defendants who struggled with addiction.

After the Georgia legislature created an accountability court program to provide sentencing alternatives for nonviolent offenders in 2012, Bell had the opportunity to help Houston County establish its own drug court.

While in the program, defendants who plead guilty to their pending felony charges must submit to random drug screens, attend substance abuse counseling, participate in community service and meet monthly with a judge. In exchange, they could receive less or no jail time, and their charges could be dismissed.

Bell worked with a friend who was a regional manager at Walmart to provide backpacks and bikes to drug court program participants who didn’t have reliable transportation.

“It used to be the law in Georgia that when you got a drug charge in connection with some driving offense, they would suspend your license,” she says. “So a lot of people would not be able to make the meetings and were not successful in the program because they didn’t have a ride.”

For the past year, she has volunteered at the Second Chance Clinic near her home in Bibb County, Georgia. She meets with people who have a criminal history and helps determine if their records are eligible for restriction from public view.

In many cases, people don’t know how to start the process and aren’t able to pay an attorney to do it for them, Bell says. But once their records are restricted, they can move forward and secure better job and housing opportunities.

As a member of the Houston County Bar Association, she also volunteers at clinics that provide wills to EMS personnel, police officers and firefighters, as well as to veterans.

Bell contends that any attorney can volunteer at these clinics since all they need to do is a pick up a form and help clients fill in the blanks. It’s simple, but it matters, she says.

“This past year, we had someone write to us and say, ‘Within six months of you having the wills clinic, one of our firefighters was killed in a fire-related incident. Had it not been for the wills clinic, it would have been chaos for his family,’” Bell says.

“First responders give so much to us as a community. They protect us, they serve us, and we always want to give that back.”

She often encourages friends and colleagues to get involved with volunteering and pro bono to show their community that there’s more to attorneys than what they see on TV. Plus, she says, they shouldn’t forget where they came from and who helped them along the way.

“I like for the profession to have a good reputation, and I just personally like to give back,” Bell says. “If I can help someone, I am going to offer that help, because you never know when the chips may fall, and you may be the person in need.”