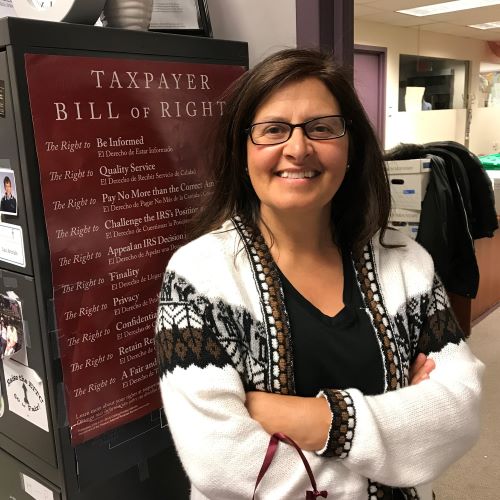 ABA member Luz Arévalo is a senior attorney and director of the Low-Income Taxpayer Clinic at Greater Boston Legal Services.

Luz Arévalo has spent most of her career helping immigrants and members of other marginalized communities sort through issues with their taxes.

As a senior attorney and director of the Low-Income Taxpayer Clinic at Greater Boston Legal Services, she represents clients who have tax controversies involving unreported income, audits or other issues with the Internal Revenue Service. She also assists them in securing their tax credits, including the Earned Income Tax Credit, which benefits low- to moderate-income workers and families.

Arévalo, who herself is an immigrant from a working-class family, knows firsthand how these efforts make a difference in the lives of her clients, particularly immigrant workers who need to establish a tax-paying record to adjust their status in the United States.

“It’s a great field, and it allowed me to work with my favorite clients—immigrants like me and my family, many undocumented as were we but who feel that paying taxes is a patriotic act,” she says. “They’re actually happy to pay because it means they have a job.”

Arévalo has been recognized for the compassion and commitment she shows her clients, first through GBLS’ Dow-Gardiner-Landrum Award in 2017, and then the Massachusetts Bar Association’s Access to Justice Award in 2019.

Bill Rosenfeld has seen Arévalo’s advocacy in action. He met her in 2015, after he retired from his job as a computer consultant and wanted to start volunteering at GBLS. Because he had worked with the IRS’ Volunteer Income Tax Assistance program, he was directed to Arévalo’s clinic.

He uses a string of complimentary adjectives to describe her.

“Energetic, because she’s a bowl of energy,” Rosenfeld says. “She can do at least five things at once and usually is doing many. She’s empathetic. She totally relates to the clients and gets wrapped up in their lives, and really feels for them and wants to make sure they get the best that they can.

“And charismatic, because she always has volunteers working for her, like me and other people, and seems to do an amazing job of continuing to find them.”

Growing up in Colombia, Arévalo liked school but wondered what the future held for her. Her parents, who had little formal education, struggled to raise her and her eight siblings on the money her dad made painting trash trucks for the government.

Some of her dad’s friends told him there was more work in New York City, so he left to join them there. A couple of years later, when Arévalo was 15, her mother led the rest of their family to Mexico and then across the border to the United States.

At the time, the only English Arévalo knew were lyrics to Beatles’ songs. She enrolled in Long Island City High School and was placed in a full-immersion English class, where she says she learned the language with the help of her dad and some great teachers.

“My dad did a good job of telling me, ‘Look, you can do things; it’s OK to take risks,’” Arévalo says. “It was just good to see that it’s OK to speak up. I never lost my accent, but I had a good sense for the language. I always loved literature, I was always thinking in words, so all of that was helpful.”

She graduated from Baruch College, a City University of New York school, and became a U.S. citizen in 1990. She then went to Northeastern University School of Law in Boston, where she met her husband, Ed Zabin, who is now the chief of the Homicide Unit at the Suffolk County District Attorney’s Office. They have three children, Paloma, Raquel and Bobby.

Arévalo thought she might practice immigration law because of her own experience or work in a large firm. But after graduating from law school in 1993, she heard about a job in the Fair Labor Division of the Massachusetts Attorney General’s Office.

As an assistant attorney general, Arévalo helped prosecute employers who defrauded workers and the system by not paying wages, unemployment insurance taxes or workers’ compensation insurance. Since many of the affected workers were immigrants, she also attended workers’ rights meetings with Marielena Hincapié.

“I would show up with my nice suit and my high heels, and she would go there with sneakers and jeans,” Arévalo says of Hincapié, who later became the executive director of the National Immigration Law Center. “I was like, ‘I’m here to see if people have wage problems,’ and of course, they did. But look at me—could I relate?

“With Marielena, she just treated people like family. She talked to them about what was going on and how them being there could make a difference. That made me really think that this work is not just case-by-case.”

Hardin Matthews (from left), Nirali Patel, Luz Arévalo, Angela Divaris and Bill Rosenfeld standing by the Old North Bridge in Concord, Massachusetts, where farmers took up against the British in 1775.

In 2000, Arévalo joined GBLS to replace an attorney on parenting leave from the Employment Unit, which helps immigrant and low-income workers with wrongful denial of unemployment benefits, violations of state and federal wage laws and other related issues.

She felt drawn to their work and decided she didn’t want to leave.

“Working for legal services is not just 9-to-5; you can make it a way of life,” says Arévalo, who also joined the ABA around that time. “You see there are a lot of systemic problems when the government is not responding, or the government is being lax in enforcing rules, or employers are able to hire lawyers and the workers can’t or the workers are being asked for immigration status even though it’s completely irrelevant.”

Shortly after starting at GBLS, Arévalo and her colleagues learned the IRS would give grants to legal services organizations that represent low-income taxpayers or taxpayers who speak English as a second language. Arévalo, who had worked with the VITA program during law school, secured the grant and established the Low-Income Taxpayer Clinic.

For several years, Arévalo represented clients with the help of local law students. Many of these clients owed taxes but didn’t think they could afford to pay them. Others struggled with what she calls “bureaucratic oppression,” meaning they had questions about their taxes but didn’t know how to navigate the IRS to find the answers.

“What I have found with tax problems, they are the source of a lot of stress for people,” Arévalo says. “They just know that those bills are piling up. They hide them and put them away, but they’re always on their mind.

“When they’re able to bring me a whole packet, like, ‘Here, now it’s your problem,’ I can see it. They feel relieved. They feel now that they have someone on their side.”

Arévalo now works with a team of four, including Rosenfeld. In recent years, she has helped workers get their stimulus checks and Child Tax Credit during the COVID-19 pandemic. She also provides advice on tax questions to other GBLS departments and legal services organizations in Massachusetts and advocates to change state laws to bring greater benefits to her clients.

As one example, Arévalo encouraged the Massachusetts legislature to pass a law in 2017 that allows survivors of domestic violence to get the Earned Income Tax Credit even if they state their filing status as married filing separately. Previously, they had to file joint tax returns with their abusers or qualify for head of household status to claim the credit.

She is also calling on state legislators to expand Earned Income Tax Credit eligibility to undocumented immigrants who work and pay their taxes.

Monica Halas, a former lead attorney who worked at GBLS for more than 40 years, served as Arévalo’s supervisor. For her, it’s Arévalo’s mix of passions that make her a unique legal services lawyer.

“She really believes in individual case representation and represents so many people,” Halas says. “But in addition, she has an eye always on, ‘What kind of systemic changes can I participate in and can I make?’

“Very often, people who end up doing systemic work abandon the individual casework, but that’s not Luz. She does an enormous number of individual cases and then also does systemic advocacy.”