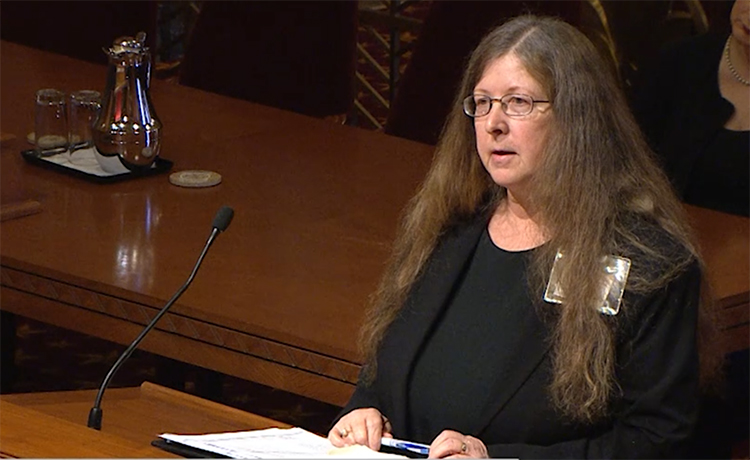 Screenshot of Cynthia Rodgers representing herself before the Supreme Court of Ohio on Jan. 28.

Cynthia Marie Rodgers, a 2019 law school graduate, with her husband has a total of almost $900,000 in school debt. The Ohio Supreme Court’s board of character and fitness thinks that issue—along with her history of filing many lawsuits and nonpayment of old consumer debts—should prevent her from becoming a lawyer, at least for a few years.

The board filed its report in July, and Rodgers, a Capital University School of Law graduate, on Jan. 28 represented herself in oral arguments before the Ohio Supreme Court, which can be seen here. Rodgers admitted to having a substantial amount of school debt but pointed out she’s enrolled in an income-based repayment plan and has never been in default.

The character and fitness board seemed particularly troubled by Rodgers’ acknowledgment that after a 2001 tree-trimming accident resulting in her being disabled, she knew she wouldn’t be able to pay off her school debt. It appears her current payment is zero because her income is so low, according to the report, which recommends allowing Rodgers to reapply for bar admission in July 2024. Because her character and fitness application has not been approved, Rodgers has not yet taken the bar exam. 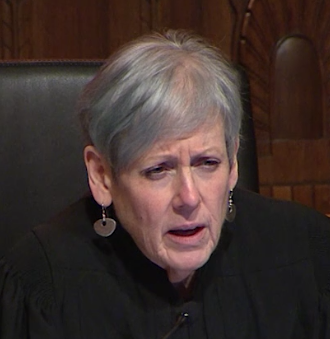 “You’re not being singled out here. But debt, extreme debt, is one of those triggers. And you do have extreme debt,” O’Connor said.

Rodgers, 59, has an associate degree and a bachelor’s degree from Ohio University, and she started but didn’t finish a master’s program at the school, according to her character and fitness report. The report also says Rodgers stated that because of her disability, she can’t work a 40-hour week. In the past 20 years, she’s only been employed for two years, as a paralegal, according to the report.

Rodgers’ husband isn’t paying any money toward their school debt, either, according to the report, and he’s semi-retired and seeking disability. On Tuesday, Rodgers told the court her husband had worked on a graduate program in economics.

When contacted by the ABA Journal, Rodgers said she could not comment on the matter. The report states she intends to work part-time for legal aid if she becomes a lawyer.

For her school debt, Rodgers told the court she’s enrolled in a 25-year income-based repayment plan that comes to term in six years. At that point, she said, any remaining debt would be discharged under the terms of her loan agreement.

Also, she reasoned while having a substantial amount of debt could tempt an attorney to steal money from clients, that was not an issue for her.

“When you’re on the percentage-of-income plan, you don’t have any more pressure than you would of someone who owes $100,000 versus $200,000. Everyone is going to be paying if they’re on that plan the same percentage of their income, so it’s no more of a burden on one who owes more than one who owes less,” Rodgers said.

The court didn’t ask Rodgers about the multiple lawsuits she’s filed. But Rodgers brought up the issue and said the character and fitness report’s statement that she’s been involved in “almost 60 civil actions during her lifetime” is not accurate, and many of the actions in question were actually administrative matters.

“The applicant appears to be a person who would rather file a lawsuit than resolve an issue by negotiation or other means,” the report states.

It also states Rodgers was involved in various lawsuits related to her father’s estate and says she likely was involved in the unauthorized practice of law because rather than filing the actions on her own behalf, they were brought on behalf of her father or a sibling.

At her supreme court hearing, Rodgers said she handled a 2½-day bench trial related to her father’s estate and argued its appeal.

“Because it said in the caption ‘administrator,’ I thought I had the ability to handle that case,” Rodgers said. She also told the court that now she realized “that’s a violation of UPL, and I want the court to know that I did report myself for that.”

The character and fitness report also mentioned a recent unpaid minimum wage claim where Rodgers had counsel. Mark J. Miller, the defendant, was a Columbus attorney she had an internship with who originally paid her a mileage reimbursement. In June 2019, he filed a complaint seeking to have Rodgers declared a vexatious litigator. The next month, the court filed an entry stating the parties resolved the case, according to the report.

“Miller reportedly agreed to pay the applicant $16,500 plus attorney’s fees as part of the settlement,” the report states. It also says Rodgers “arguably took advantage” of Miller, who was “willing to help her learn about the law.”

Additionally, the report says she has old consumer debt that may have been discharged due to age.

“She has learned to ‘work the system’ effectively. The applicant lives in federally subsidized housing, has ignored debts she is not able to pay until they disappear, and with her husband has amassed almost $900,000 in student loans that she admits they will never repay,” the report states.

Cassandra Burke Robertson, a law professor at Case Western Reserve University who directs its Center for Professional Responsibility, says she was “horrified” by language in the report. Particularly the part about Rodgers living in subsidized housing and knowing how to work the system.

“That was the ugliest language I’ve ever seen in a document,” says Robertson, who also thinks people living in poverty tend to have more legal issues than others.

“It doesn’t trouble me that she did her best to try to file a lot of pro se actions to work things out,” Roberston says.

Jonathan E. Coughlan, a former Ohio Supreme Court discipline counsel who now does attorney discipline defense work, told the ABA Journal he saw the report’s language about Rodgers working the system being related to her lawsuits, not her living situation.

Coughlan also represents bar applicants, and he says if someone has filed for bankruptcy or enrolled in credit counseling—which Rodgers did, according to the report—that alone probably won’t stop them from getting through the bar’s character and fitness section.

But he does think based on what the report says, it appears Rodgers didn’t know how much she borrowed in student loans, which could be a problem.

“If I were doing this pro se, I would say to myself, ‘What are the issues that will come up?’ I would want to know, ‘What are my financial issues?’ As a lawyer, you are supposed to be financially responsible,” Coughlan says.