For 30 years, ProBAR has served immigrants and refugees at the southern border 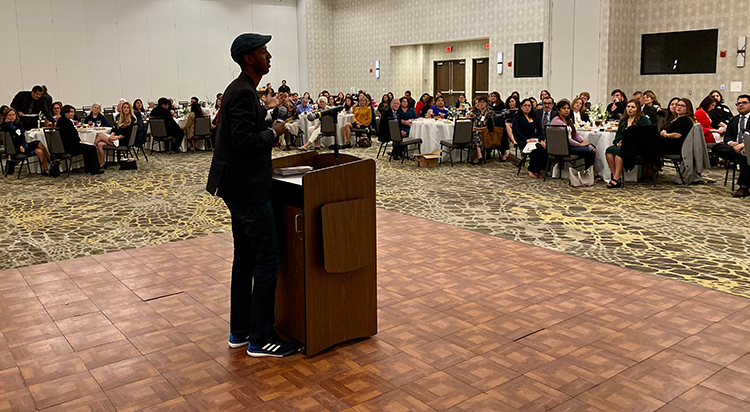 Mohamed, a former ProBAR client whose last name is being withheld for his safety, addresses attendees of ProBAR's 30th anniversary celebration. Photo provided by ProBAR.

Thirty years after its founding, the South Texas Pro Bono Asylum Representation Project is in the midst of a Central American refugee crisis that requires its services more than ever.

“Right now, we have 2,000 people who are living in tents just across the border in Matamoros, Mexico, who are in the process of applying for asylum but are being kept in Mexico under the Migrant Protection Protocols, otherwise known as Remain in Mexico,” Kimi Jackson, the director of ProBAR, says. “Their situation is extremely dire.”

The ABA created ProBar in Harlingen, Texas, to help an earlier wave of Central American people who were fleeing civil wars in El Salvador, Guatemala and Nicaragua, Jackson told the audience at its 30th anniversary celebration on Friday.

At the time, Jackson explained, people were also fleeing Honduras because the U.S.-backed Contras were encamped in their country and the fighting had spilled over from Nicaragua.

“The South Texas Pro Bono Asylum Representation Project, or ProBAR, got its name because probar means ‘to prove’ in Spanish and, as Bob explained, ‘there was a lot we meant to prove to the immigration judges,’” she said. 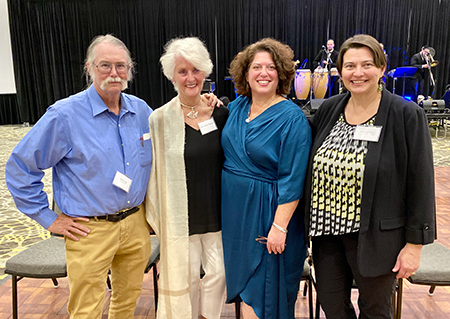 In the early days, Robert Lang, ProBAR’s first attorney, and Jennifer Bailey, its first paralegal, screened and mentored clients at the nearby Port Isabel Detention Center. Carol Wolchok, then-director of the ABA Center for Immigration Law and Representation, recruited pro bono attorneys to help with the work.

“There were no other staff,” Jackson said. “There was also no Google, and ProBAR enlisted the help of volunteers in Austin who looked for newspaper articles about Central America, and mailed clippings to ProBAR to be used as supporting documentation.”

Since Jackson joined ProBAR eight years ago, the project has grown prodigiously. It once had less than 20 employees, but now has more than 175 staff and contractors. About 30 of them are attorneys.

Jackson contributes the project’s significant growth to the urgent needs at the border, and more specifically, to the increase in detention centers for unaccompanied minors. The maximum number of unaccompanied minors that were detained in the area was less than 400 in 2011, but now, it’s nearly 5,000, she says.

Total number of immigrant children and adults served by ProBAR

In recent years, Jackson says the total number of immigrant children and adults who received ProBAR’s services has also increased. In 2013, the project helped more than 9,400 people. By the end of this year, it expects to assist more than 24,000.

Its recent clients include people from Venezuela, Cuba, Bangladesh, Cameroon, Angola and India, as well as Mexico and Central American countries.

Jackson was drawn to work at the border because she has “a personal belief that everybody deserves an opportunity to pursue their dreams and live in a situation that is safe.” Attorneys who share similar beliefs are invited to volunteer with ProBAR and have done so in large numbers.

In 2018, ProBAR hosted 116 volunteer attorneys, 25 volunteer law students and 45 supporting volunteers. Jackson contends that the final numbers for 2019 will be significantly higher due to collaboration with the ABA’s Commission on Immigration and Children’s Immigration Law Academy in Houston.

ABA President Judy Perry Martinez, who has volunteered twice with ProBAR, says the association is “fiercely committed to due process for immigrants and asylum-seekers on the border.”

“ProBAR’s rich 30-year history of providing direct legal services, day in and day out, is proof of that commitment,” Martinez said in a statement provided to the Journal. “It was an honor to volunteer with the ProBAR staff these past two summers. Their dedication in difficult circumstances is an inspiration to all lawyers.”

Looking forward, ProBAR hopes to expand its outreach team so it can increase its capacity for pro bono volunteers. The project also plans to hire additional staff to assist individuals in the Remain in Mexico program and to provide services to adults in a third nearby detention center.

As Jackson talked with Lang before ProBAR’s anniversary celebration, she asked him whether he envisioned the project growing as much as it has over the past three decades.

He told her he “never imagined that there would be so much need,” Jackson said.

“Unfortunately, the need is here.”

ABA Journal: “Are you an attorney who wants to get involved at the border? The ABA offers ways to do it”