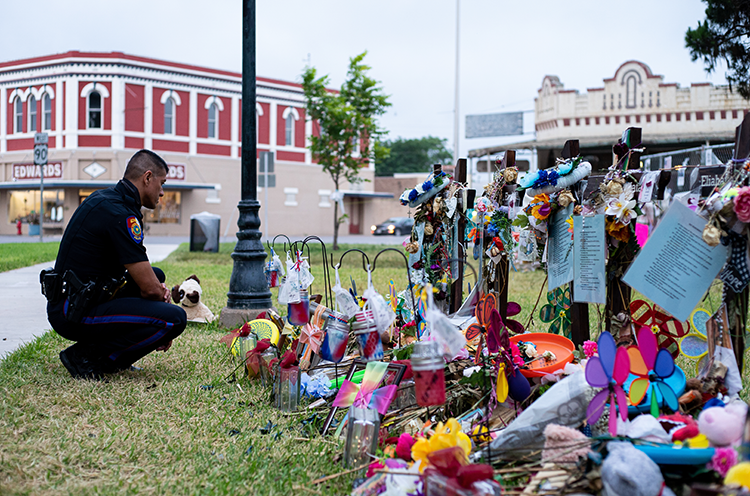 A police officer from Edinburg, Texas, stops at the memorial for the Robb Elementary school victims in the town square of Uvalde, Texas. Photo by Jinitzail Hernandez/Shutterstock.

The ABA House of Delegates passed two gun control resolutions at the 2022 ABA Annual Meeting in Chicago. One urges lawmakers to prevent gun purchases from moving forward by default after three business days, even if the check is incomplete. The second calls for more to be done to prevent violent dating partners and stalkers from buying or owning firearms.

The ABA’s call for enhanced gun controls comes after several deadly mass shootings this year. In May, in Uvalde, Texas, a gunman killed 19 children and two teachers at an elementary school. And at a Fourth of July parade in the Chicago suburb of Highland Park, a gunman shot and killed seven people and wounded dozens more.

Speaking in support of the resolution, Margaret Finerty of the New York State Bar Association said there was an “epidemic of gun violence” in the United States and highlighted the recent tragedies in Uvalde and Highland Park.

“Performing a thorough background check is the key to preventing firearms from getting into the hands of those who should not possess them,” Finerty said.

Under federal law, purchases move forward by default after three business days, according to the report accompanying the resolution. The report says there should be more time to complete a background check through the National Instant Criminal Background Check System.

Gun control advocates have long pushed for the repeal of the federal law that imposes the three-day limit, also known as the “Charleston Loophole.” The term refers to a massacre in which white supremacist Dylann Roof murdered nine Black people in a Charleston church with a .45-caliber Glock pistol that he purchased legally, despite having a prior arrest record, because his background check had not been completed within three days.

Finerty said the loophole “resulted in numerous tragedies that could have been prevented if additional time had been allowed to complete a thorough background check.”

Rep. Jim Clyburn, D-S.C., has introduced a bill called the Enhanced Background Checks Act of 2021, which would increase the window for completing the background check from three to 10 business days. The bill passed the House in March 2021 and is pending in the Senate.

Gun rights groups, including the NRA, argue that the current law is a valid means of requiring the FBI to complete background checks in a timely manner. They have also argued the three-day window should be reduced.

In June, President Joe Biden signed the Bipartisan Safer Communities Act, which included more stringent background checks for gun buyers under 21. The law also provides support and funding for red-flag laws (laws that be used to seize guns from people who pose a danger to themsleves or others) and mental health services.

The act also addresses what gun advocates have dubbed the “boyfriend loophole” in federal law. Federal law previously only barred people convicted of domestic abuse or subject to certain domestic violence restraining orders from buying guns if they were married to or living with their partner. The new law expands these bans to dating partners who are not cohabitating.

According to Poynter Institute’s Politifact, half of the women killed by their partners in 2020 were dating their attacker.

The Bipartisan Safer Communities Act does allow offenders to regain the ability to buy a firearm after five years under some circumstances, according to the New York Times.

Resolution 801, adopted Tuesday, urges state and federal lawmakers to take action to ensure that people convicted of dating violence, stalking, domestic violence or subject to protective orders issued to prevent these crimes—including emergency ex parte orders—are not allowed to buy a firearm. It also urges lawmakers to require these people to relinquish the firearms they own.

Delegate Mark Schickman of the Section of Civil Rights and Social Justice spoke in support of the resolution.

“It identifies an inconsistency in the law that this resolution seeks to remedy by closing what’s called the ‘boyfriend loophole’ to include dating violence and stalking violence as categories where if you are convicted of those offenses, you will be further restricted from having a firearm,” Schickman said.