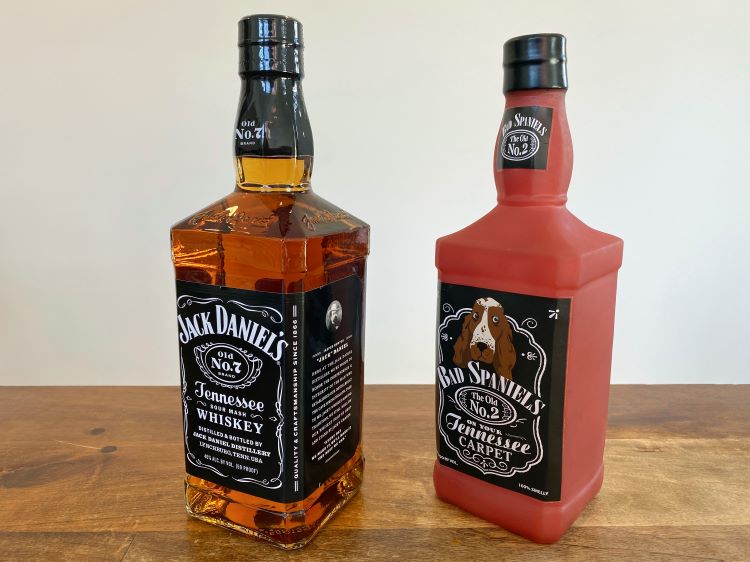 A bottle of Jack Daniel's Tennessee Whiskey is displayed next to a "Bad Spaniels" dog toy Nov. 20. Jack Daniel’s Properties Inc. has asked the U.S. Supreme Court to hear its case against the manufacturer of the toy. Photo by Jessica Gresko/The Associated Press.

The U.S. Supreme Court has agreed to decide whether a parody dog toy called “Bad Spaniels” is entitled to protection from trademark infringement and dilution-by-tarnishment claims by Jack Daniel’s Properties Inc.

The Supreme Court agreed Nov. 21 to review a decision by the 9th U.S. Circuit Court of Appeals at San Francisco that said dog toymaker VIP Products was entitled to First Amendment protection because the dog toy was an expressive work.

The decision made it more difficult for Jack Daniel’s to win on the infringement claim and barred the company’s claim for dilution by tarnishment.

Jack Daniel’s argued in the cert petition that the 9th Circuit’s decision “guts Jack Daniel’s ability to protect its brand and paves the way for companies like [VIP Products] to unleash mass confusion in the marketplace.”

The first time that the case came before the 9th Circuit, it said First Amendment protection made the parody product noncommercial and exempted it from a dilution-by-tarnishment claid. The 9th Circuit remanded the case and directed the trial court to enter judgment for VIP Products on the dilution claim and to reexamine an infringement claim using a two-part test that considers whether use of the trademark is artistically relevant and whether consumers are explicitly misled.

A trial judge then granted summary judgment to VIP Products, and the 9th Circuit affirmed.

Law360, SCOTUSblog, Reuters and the Associated Press were among the publications covering the cert grant.