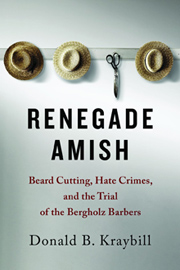 The Amish religion is a branch of Christianity that adheres to a doctrine of simplicity, nonviolence and forgiveness. How then did a breakaway group come to be implicated in the first federal trial to prosecute religiously motivated hate crimes within the same faith community?

From September to November in 2011, there was series of five attacks against nine Amish victims in Ohio in which their beards or hair were shorn. Some were left bruised and bloodied. Several victims had their homes invaded in the dead of night, while others were lured to a settlement in Bergholz, Ohio, and then attacked. The alleged perpetrators were from a breakaway Amish community in Bergholz, led by a bishop named Samuel Mullet. Some victims were estranged family members of the attackers, while others had crossed Mullet in some way.

State officials called on federal prosecutors to take over the case and to try the alleged perpetrators under the Shepard-Byrd Act, a federal hate crimes law. Sixteen people were charged in the attacks in U.S. v. Miller, including Mullet. The jury found the 10 men and six women guilty of a total of 87 counts out of 90. But how did it come to this?

Donald Kraybill, a professor of Amish studies, was an expert witness in the trial. He has written Renegade Amish: Beard Cutting, Hate Crimes and the Trial of the Bergholz Barbers, to explain the history of the case, and the sociological and religious factors that led to the attacks.

Though the Cincinnati-based 6th U.S. Circuit Court of Appeals overturned the convictions in a 2-1 decision, based on their interpretation of “but for” causation in the 2009 hate-crimes act, they allowed for a retrial.

Kraybill does not think that this will be the end of the case. In this podcast, he shares with the ABA Journal’s Lee Rawles the backstory behind the case; what it was like for him to testify; and what he feels the implications of the 6th Circuit’s decision will be.

Find out more about the Amish:

• The Amish, by Donald B. Kraybill, Karen M. Johnson-Weiner, and Steven M. Nolt

• The Amish and the State, by Donald B. Kraybill

Donald B. Kraybill is a professor and senior fellow at the Young Center for Anabaptist and Pietist Studies at Elizabethtown College. He is the author, co-author or editor of more than a dozen books on Amish culture, including The Amish, The Riddle of Amish Culture and Amish Grace: How Forgiveness Transcended Tragedy.