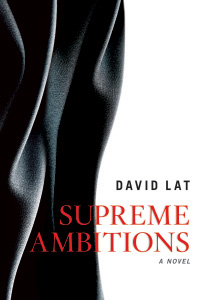 In David Lat’s first novel, Supreme Ambitions, a young Yale Law School grad named Audrey Coyne lands what appears to be the opportunity of a lifetime when she becomes a clerk for Judge Christina Wong Stinson of the 9th U.S. Circuit Court of Appeals. Coyne sees this as the first step to her ultimate ambition: a U.S. Supreme Court clerkship, and the prestigious career which would be sure to follow. But what is she willing to sacrifice to achieve this goal? And is everything about this clerkship as it appears at first blush?

“I really enjoyed getting back into that anxious, ambitious mindset of my 20s,” Lat said. “It might sound strange, because the condition of being anxious and ambitious actually doesn’t sound very fun. But for me, I think, reliving that in writing this novel was again, as I was saying, therapeutic. It allowed me to look back on my former self with a greater sense of perspective. As some observers have noted, there are some similarities between myself and Audrey. And so writing about her story and her journey through the profession was in a way like looking back on my own years starting out as a law clerk and a young lawyer.”

In this episode of the Modern Law Library, moderator Lee Rawles chats with Lat about his novel, his career, and his time as the anonymous author of the sometimes-scandalous blog Underneath Their Robes. Supreme Ambitions is the first release from ABA Publishing’s new trade imprint, Ankerwycke, which was named for the tree beneath which the Magna Carta was sealed.

The New York Times: “Pleasing the Court With Intrigue”

Hercules and the Umpire: “David Lat’s first novel, ‘Supreme Ambitions,’ deftly dissects judicial power, how to get it and how to use (and abuse) it”

ABAJournal.com: “What things do you consider before taking a case? | Bloggers review novel by ATL’s David Lat”

David Lat is the founder and managing editor of Above the Law. David worked as a federal prosecutor in Newark, New Jersey; as a litigation associate at Wachtell, Lipton, Rosen & Katz, in New York City; and as a law clerk to Judge Diarmuid F. O’Scannlain of the 9th U.S. Circuit Court of Appeals. Prior to starting Above the Law in the summer of 2006, David founded Underneath Their Robes, a blog about federal judges. Supreme Ambitions is his first novel.