What things do you consider before taking a case? | Bloggers review novel by ATL's David Lat

Do you actually have procedures in place for whether you should take a case? Minneapolis solo Randall Ryder does—a four-step process he shared at Lawyerist. Two of his steps:

• Determine whether the case is one you can handle—particularly if it’s out of your practice area. Taking the “approach of ‘I don’t do personal injury, but this sure looks like a standard dog bite case’ is a recipe for disaster.” Always consult first with an attorney in your network who will tell you what you need to know to help you decide whether to take the case on. “For example, maybe your law school buddy turned personal injury expert tells you that your case is a rock solid claim that’s worth $50,000,” Ryder wrote. “He also told you that the insurance company will tie you up in discovery for a year, and you will need to fly all over the country taking depositions before they will seriously talk settlement.”

• Determine whether the case fits into your current workload. Ryder always says: ‘I never have enough work, and I never turn down a good case.’ That is 100 percent accurate, but the definition of a ‘good case’ depends on the week and my current caseload.” Also, be sure to look at the big picture when you take cases. “If you constantly take clients with legal emergencies and just hop from client to client, you will never have time to take on potentially larger cases that require a more thorough and drawn out investigation and preparation.” 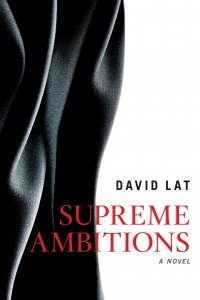 A few law blogs have already reviewed the book, which is about Audrey Coyne, a clerk for a federal appeals court who dreams of one day clerking at the U.S. Supreme Court. Some of the reviews:

• Simple Justice: “All the juiciness one would hope for in the details of how ambitious gunners scheme to climb to the top of the legal food chain are in here, enough so that all the deniers that federal judge have their clerks deciding the fate of the world will weep,” Scott Greenfield writes. “Woven into the tale of sweet, self-effacing Audrey in nasty AmbitionLand are the nuances that elude most of us, as we never need to know how to dodge and weave our way to greatness.” He also notes: “I learned more about professional women’s fashions than I ever cared to know, though. I wonder why it was more Manolo Blahnik than Louboutin, more Armani than Chanel. Does this matter?”

• Hercules and the Umpire: Judge Richard Kopf thinks Lat’s take on federal judges is spot-on. “He divides federal appellate judges into two camps. The CEOs who manage cases, but who find little interest in the nitty-gritty of the law. They are said to see the big picture. Alternatively, there are the judges who are technicians who love the law, and the nitty-gritty that goes with it. They are said to be the intellectuals. While this division does not always hold true in real life, my experience suggests that Lat’s taxonomy is generally accurate.”

• Maryland Appellate Blog: Steve Klepper says the book is a “legitimate page-turner” and should be required reading for anyone applying to law school. But he (as did Kopf and Greenfield to a lesser extent) say the dialogue can be stilted—in part because the complex subject matter calls for so much exposition. “Lat’s solution, understandably, is for his characters to engage in conversations filled with information that, by all rights, could go unsaid between them. The exposition-heavy dialogue, combined with the short chapters, brought to mind an unkind comparison to The DaVinci Code. Unlike The DaVinci Code, though, I actually enjoyed Supreme Ambitions.”

Texting in a traffic jam?

This week, Law & Daily Life took on the question: Is it legal to text while stopped in traffic? (As opposed to while in motion, naturally.)

It depends on what state you’re in. “In Florida, for example, the texting while driving statute notes that ‘a motor vehicle that is stationary is not being operated and is not subject to the prohibition,’” FindLaw writer Daniel Taylor writes. “If you are at a complete stop in traffic, you may be able to argue that you are stationary and thus not subject to the state’s prohibition on texting while operating a vehicle.”

Rhode Island’s texting-while-driving law makes a specific allowance for texting while in a car that’s inoperable or a standing car “removed from the flow of traffic.” But “although being stuck in gridlock can certainly feel like being ‘removed from the flow of traffic’ it isn’t likely to fly as a defense to a citation under this statute,” Taylor writes.