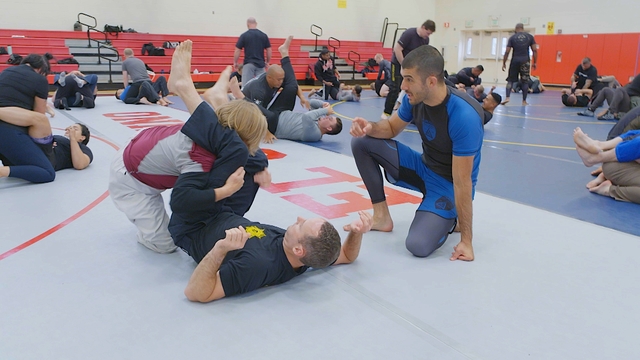 People in high-pressure occupations often find themselves in dangerous situations. Sometimes that danger rears its head via emotional exhaustion, mental health issues or physical outbursts of aggression. When individuals spend the majority of their time in a high-stress environment, it’s sadly far too easy to allow that stress to manifest itself in troubling ways.

Attorneys know this all too well. Most of us know the story of someone who fell off the deep end as they succumbed to the tension, strain and anxiety that accompanies our profession. Whether that distress exhibits itself through mental illness, substance abuse or violence, the proclivity to slip toward destructive behaviors is all too real.

However, this razor’s edge isn’t reserved for the practice of law. It’s found in plenty of other professions as well. As a country, we’ve continuously seen examples of law enforcement officers losing their heads and physically harming civilians. And I’m not even referencing the ridiculous number of police shootings. No, instead I am focusing more on cases where suspects have been beaten, broken—and in some instances killed—when law enforcement have put their hands on citizens.

If I’m playing devil’s advocate, I’d argue adrenaline plays into the process quite a bit as well. If you have an overworked individual, stressed to the max, tasked with facing potential life-and-death situations day in and day out, that constant strain could be exacerbated by the rush of actually being in a hands-on circumstance in which your body’s natural reaction causes your adrenal glands to produce a hormone that literally prepares your muscles for exertion.

Does it make the ensuing violence right? Of course not. Can it be corrected or harnessed? Possibly so.

Last month, HBO released a new segment of Real Sports with Bryant Gumbel titled “Force for Change.” The piece starts with various clips of cops beating suspects who appear to be hindered at best and completely unable to defend themselves at worst. It’s difficult to watch, but that is part of the problem: Police are physically harming these humans, and it has to stop.

This is where members of mixed martial arts’ first family—the Gracies—have offered their aid with the hope that training law enforcement in their family’s art of Brazilian jiujitsu can make a lasting and lifesaving change.

Most people are familiar with Brazilian jiujitsu through its use in the Ultimate Fighting Championship and other mixed martial arts promotions. However, the roots of the art go back much, much farther. BJJ traces its origins to the early 1920s, when five brothers in Brazil created the art based on their exposure to Japanese Kodokan judo/Kano jiujitsu via Mitsuyo Maeda. The brothers—Carlos, Oswaldo, Gastao Jr., George, and Helio Gracie—modified the judo they were taught while focusing more on the art’s ground fighting and leverage aspects. This form of self-defense spread and is now practiced all over the world.

What we know colloquially refer to as BJJ is a system of holds, locks, blood chokes and joint manipulation that can disarm and disable another individual. The beauty of BJJ is that it is inherently nonviolent, at least when compared to other striking arts. Why is that? Because in BJJ, there is no striking.

According to Rener Gracie, this particular martial art “enables a smaller, weaker individual to stand a chance against a larger, more athletic aggressor in a violent physical altercation.” Furthermore, “the philosophy is absolutely the least amount of force necessary to neutralize the aggressor and their threat.” As such, the goal is to give law enforcement the tools and ability to take a violent and aggressive person into custody without excessive force.

Consequently, Rener and his brother Ryron have been traveling the country teaching BJJ to law enforcement in hope their methods will provide cops with a more effective and less violent means of apprehending suspects. This practice could be highly beneficial, as the segment notes that most law enforcement training is focused on firearms even though very few officers ever fire their weapons in the line of duty. On the other hand, law enforcement generally receives little to no hand-to-hand combat training, even though they have physical contact with civilians at a significantly higher rate.

During the segment, much of the discussion focused on how BJJ can help neutralize a suspect in a “camera-friendly” manner. When Rener Gracie was asked whether the goal of implementing this martial art into law enforcement was simply to reduce the number of viral videos we all see, his answer was actually very poignant. He said the goal is to try and repair the trust and relationships between law enforcement and the communities they serve. Obviously, less online and news exposure could go a long way toward that objective.

To be fair, though, hand-to-hand combat and martial arts aren’t likely to do much regarding police shootings that occur far too often in the United States. Often when an officer shoots a suspect, it’s more out of fear and lack of training than simply aggression. However, when law enforcement officers use their bodies to strike, kick or choke a civilian, I believe it’s easier to differentiate those circumstances as occurrences where aggression is not kept in check. That adrenaline I mentioned earlier is allowed to take hold and fuel what we hope is only aggressiveness.

I’ve practiced BJJ for over seven years now. I originally began my journey for a relatively basic reason: I wanted a new avenue to pursue my fitness goals. For the longest time, I had relied on running and weight training, but I had started to lose my love for lifting. Going to the gym became a task. It had never been that way before. I no longer got the satisfaction pumping iron had provided over the previous decades, so I wanted to try something new.

My law partner suggested I try my hand at BJJ, and I haven’t looked back. Again, the goal initially was to simply find an alternative way to train and stay in shape, but BJJ has given me so much more than that.

I struggle with the stress of my occupation just as much as anyone else. Often that stress and anxiety is due to challenging interactions with clients or opposing counsel. Other times, it might be something that is entirely out of my hands. Anyone who has practiced law on their feet and litigated cases has experienced that occasion when you are right: The facts say you are right, the law says you are right—but the judge says you are wrong. It’s maddening.

I’ve found that when I have those days in court, though, I don’t have to live with the negative emotions or try and bury them so I don’t go home and burden my loved ones. I can go to my gym, shake hands with one of my training partners and then unleash all of that energy in a controlled way in a controlled environment. I’ve never experienced anything like spending five minutes trying to break another man, all the while defending the same, and then standing up with a smile to shake his hand and say “great roll.”

Everyone in a stressful line of work needs that outlet. Negative emotions and energy can too quickly become dangerous aggression if they are not harnessed and released properly. Hopefully, more law enforcement personnel will realize that as well.