Chemerinsky: The Supreme Court has done a poor job protecting against police abuse of power and racism

Following the death of George Floyd, the nation focused attention on the enormous problems of police violence and racism in law enforcement, but there is a failure to put blame where much belongs: on the United States Supreme Court.

Many provisions of the Constitution exist to limit what police can do and to protect the rights of all of us, including those suspected and accused of crimes. Yet the court has done an ineffective, and indeed a poor job, of enforcing provisions of the Constitution intended to constrain the police. The Supreme Court has historically and consistently empowered the police to engage in racialized policing that especially harms people of color.

That is the thesis of my new book, Presumed Guilty: How the Supreme Court Empowered the Police and Subverted Civil Rights. There are many provisions of the Constitution meant to limit police behavior. The Fourth Amendment restricts the ability of the police to seize people and to search them. The Fifth Amendment protects the privilege against self-incrimination and constrains police questioning. The due process clauses of the Fifth and 14th Amendments impose many restrictions, including preventing suggestive police identification procedures, such as lineups. 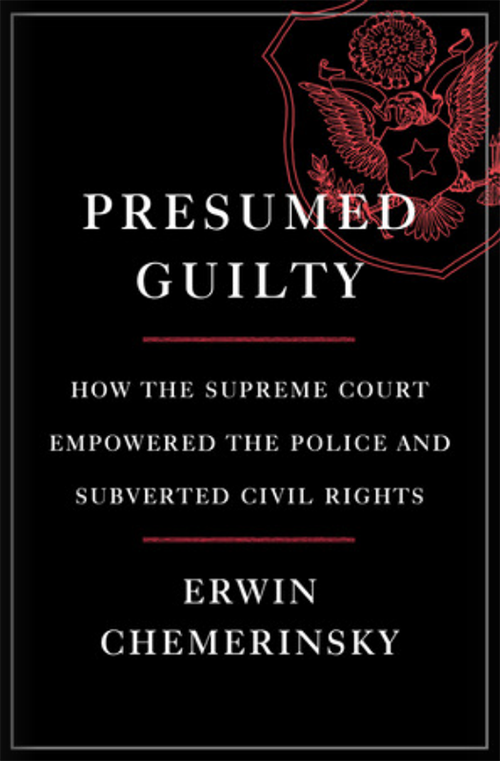 Yet through almost all of American history, the Supreme Court has done little to enforce these provisions and to constrain the police. For the first century after the ratification of the Bill of Rights, the court virtually never decided a case about them, leaving the police unchecked by the Constitution. Except for a brief time during the Warren Court, particularly from 1961-1969, the court has narrowly interpreted these constitutional protections and instead has consistently ruled in favor of the police.

It is not hyperbole to say that under current law, as developed by the Supreme Court, the police can stop any person at any time and frisk the person, a power that is disproportionately used against Black and brown people. There is little protection of individuals from coercion in police interrogations, so long as the police don’t use physical force. The court has virtually ignored the problem of false eyewitness identifications that have led to convictions of many innocent people, especially when a person is identifying someone of a different race. The court has made it difficult for victims of police abuse to successfully sue, even when an officer used egregious excessive force leading to serious injuries or death. In fact, the court has weakened, or gutted, all of the remedies that might be used to challenge police misconduct.

In empowering law enforcement, the court’s decisions have led to enormous racial disparities in policing. In 2016, Black males aged 15-34 were nine times more likely than other Americans to be killed by law enforcement officers, according to the Guardian. They were also killed at four times the rate of young white men, a study in the American Journal of Public Health found. It also showed Hispanic men are nearly twice as likely to be killed by police as white men. The United States Civil Rights Commission concluded that “while people of color make up fewer than 38% of the population, they make up almost 63% of unarmed people killed by police.” Overall, civilian deaths from shootings and other police actions are vastly higher in the United States than in other developed nations.

And even when death does not result, there is a serious problem of excessive police force, especially directed at racial minorities, that causes physical and psychological injuries. There are seemingly endless accounts of police unnecessarily striking suspects, especially men of color, with batons, using tasers, applying chokeholds, and employing far more force than needed under the circumstances. The Center for Policing Equity found that “1 in 5 Americans interacts with law enforcement yearly. Of those encounters, 1 million result in use of force. And if you’re Black, you are 2-4 times more likely to have force used than if you are white.”

Discussions about the problems with policing usually do not focus on the Supreme Court, which does not hire or train or supervise or discipline police officers. It does not set budgets for police departments or manage their operations. As people focus on what police do on the streets, the connection to Supreme Court rulings is not apparent and seems remote. But the Constitution contains crucial provisions limiting how policing is to be done and what the Supreme Court says about them, or more importantly does not say, has an enormous effect on what police do every day. Without enforcement of the Constitution’s constraints on police, all too often the rights of criminal suspects and defendants become illusory.

To take one example, under the Supreme Court’s decisions, police can stop and frisk virtually any person at any time. Studies in many cities show that police disproportionately use this power against people of color.

The court opened the door to this practice in Terry v. Ohio, in 1968, under the liberal Warren Court. Notwithstanding the language of the Fourth Amendment, which requires “probable cause” for a police stop or search, the court said that only a lesser standard—“reasonable suspicion”—needed to be met. To this day, the court never has defined reasonable suspicion other than to say that it requires more than a hunch and less than probable cause.

In subsequent decisions, the court made it easy for the police to find reasonable suspicion in almost any situation. Whren v. United States, from 1996, is particularly important. Undercover officers in Washington, D.C., became suspicious when a car stopped at a stop sign for about 30 seconds. They followed the car until the driver committed a minor infraction, turning without a signal. Even though undercover officers in D.C. were not allowed to enforce traffic laws, the police pulled the car over, ordered the driver and passenger out of the vehicle and searched the area of the car where they were sitting. They found illegal drugs.

The traffic stop clearly was a pretext; the officers had no authority to enforce traffic laws and no interest in doing so. The court said that does not matter. The actual motivation of the officers is irrelevant. The court said that “the decision to stop an automobile is reasonable where the police have probable cause to believe that a traffic violation has occurred.” So long as the officer has probable cause, or even reasonable suspicion, that a traffic law has been violated, the officer may stop the vehicle.

If police officers follow anyone long enough, they will observe a driver changing lanes, turning without a signal, exceeding the speed limit by a mile or two an hour, or—and this is the easiest for police—the car not stopping long enough, or too long, at a stop sign. It is irrelevant for Fourth Amendment purposes that the officer’s actual motivation for the stop had nothing to do with traffic enforcement. And studies show that this power is used disproportionately against people of color. Emma Pierson and the Stanford Open Policing Project analyzed data on vehicle stops from 21 state patrol agencies and 35 city police departments from 2011 to 2018. They found that Black drivers were stopped 43% more often than white drivers relative to their share of the population.

What are some solutions?

This is just one example of how the Supreme Court has empowered the police and how it has led to highly racialized policing. But what can be done about it?

In light of the political composition of the Supreme Court, now and for the foreseeable future, it is unlikely that it will interpret the Constitution to control the police. If the court continues to fail, and I fear it will given that a majority of the justices have shown no concern or awareness of the problems with policing in the United States, then we must turn to other institutions to control the police, check police abuses and end racist policing in the United States. Congress, state legislatures and city councils can enact new laws to reform policing. After the tragic death of George Floyd, bills were introduced into Congress and into state legislatures to impose crucial new checks on the police. Unfortunately, these have stalled; even the progressive California legislature failed to enact new laws last year.

State courts can interpret state constitutions to protect rights and to impose limits on state and local police departments. State constitutions always can provide more protection of rights than the United States Constitution. For example, some state courts, such as in Arkansas and Washington, have rejected Whren and prohibited pretextual police stops.

The U.S. Department of Justice can aggressively enforce existing laws to reform police departments. A federal law, 42 U.S.C. §14141, authorizes the DOJ to sue police departments when there is a pattern and practice of civil rights violations. This has been used to reform many major police departments, such as in Los Angeles, Seattle, Baltimore and Cincinnati. The Trump administration expressly refused to use this authority, but Attorney General Merrick Garland has said that once more the Justice Department will be bringing suits under it.

All of these actions can make a big difference in how policing is done in the United States. And perhaps someday, the court will fulfill its duty of enforcing the parts of the Constitution that are meant to control the police and ensure equal justice under the law.

Erwin Chemerinsky is dean of the University of California at Berkeley School of Law. He is an expert in constitutional law, federal practice, civil rights and civil liberties, and appellate litigation. He’s the author of several books, including The Case Against the Supreme Court (Viking, 2014) and The Religion Clauses: The Case for Separating Church and State, written with Howard Gillman (Oxford University Press, 2020). His latest book is Presumed Guilty: How the Supreme Court Empowered the Police and Subverted Civil Rights (Liveright, 2021).