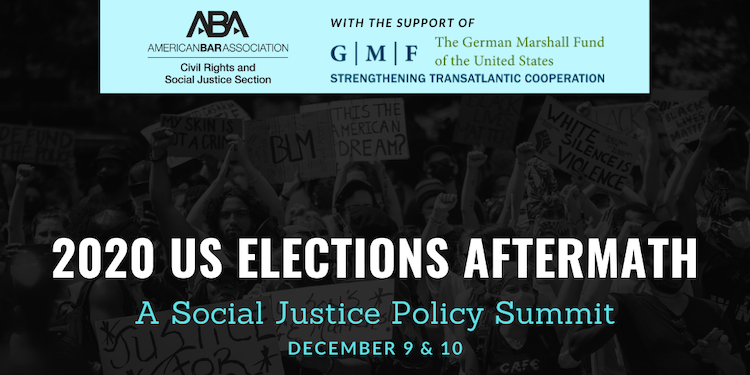 In the wake of the 2020 U.S. presidential election, the ABA Section of Civil Rights and Social Justice Rights of Immigrants Committee, in strategic partnership with the German Marshall Fund of the United States, is hosting a policy summit designed to advance racial equity and social justice principles.

This article introduces the initiative and inaugurates a multipart ABA Journal series that will discuss each of the six panels’ findings in greater detail.

Over the course of two days, Dec. 9 and 10, the interdisciplinary conference featuring leaders, scholars and policymakers will explore myriad manifestations of interpersonal, structural and institutionalized discrimination to create enhanced awareness around these issues. The convening will also culminate in concrete community-driven policy recommendations to achieve positive social, political and legal reform to ensure a better tomorrow for all.

For instance, a Centers for Disease Control and Prevention report last April showed that 30% of coronavirus patients were African Americans even though the minority group comprises 13% of the U.S. population. In a similar vein, a report in May showed that the Navajo Nation had the highest per capita rate of infections in the United States. Additionally, Latinos constitute 18% of the national population but accounted for 33% of all coronavirus cases, according to an analysis released in July.

Moreover, Black, Hispanic and Native American children make up 78% of all coronavirus youth fatalities, per the CDC. According to research, this is largely because, among other reasons, racial and ethnic minorities live with preexisting conditions and lack access to health care for treatment.

Arguably, these jarring realities are merely symptomatic of a formidable crisis inadequately addressed in housing, employment and health care, among other laws. This panel explores these vast inequalities while contemplating equitable solutions to eliminating structural barriers to equality for racial and ethnic minorities.

During the next session, panelists will consider policy approaches to institutional reform. From law enforcement abuses in Portland, Oregon, to institutionalized violence in immigration detention facilities, public demands for institutional reform have included calls to defund local police forces, abolish the U.S. Immigration and Customs Enforcement and dismantle the U.S. Department of Homeland Security in its entirety. In response, some elected officials have countered with legislation that would effectively “defund the cities that defund the police.”

But what does it all mean? Here, panelists will identify, describe and contextualize emerging trends in institutionalized violence. They will also assess recent legislative proposals and discuss practical policy solutions that ensure safety for all.

Physical attacks and verbal harassment against Asian Americans, commonly scapegoated as carriers, for example, are now rampant. They are not the only minority community to experience the violent effects of social, political and cultural othering, however.

Even prior to the pandemic, hate crimes involving physical violence such as intimidation, assault and homicide reached a 16-year high, according to a 2018 FBI report. And since the 2016 presidential election, for instance, hate crimes against the Latinx community have increased by more than 50%.

Further, anti-Black hate crimes make up approximately 47% of all race- or ethnicity-based hate crimes even though the minority community comprises only 13% of the population. Additionally, Muslim and Jewish Americans are also experiencing disproportionate rates of interpersonal violence.

Still, hate crimes are vastly underreported by and to law enforcement officials. While some states have not yet enacted hate crimes statutes, the ones that have do not treat such crimes consistently. Whereas an act or threat of violence may qualify as a hate crime in one jurisdiction, victims may be excluded in another.

Additionally, prosecutions are not uniformly pursued, notwithstanding federal law. As such, this panel examines the manifestations of racial, ethnic and religious bias while considering related policy proscriptions in light of the contemporary social, political and legal landscape.

The convening’s second day continues the conversation about interpersonal, structural and institutionalized discrimination. First, experts will focus on the privacy rights of minority citizens and noncitizens alike.

Last April, for instance, the U.N. warned that the United States was using the pandemic to summarily expel asylum seekers. As part of a long-term strategy to slow the influx of newcomers, President Donald Trump has implemented additional restrictions. He also falsely claimed that the construction of a barrier wall on the border with Mexico will prevent further infections.

Still, from the Chinese Exclusion Act of 1882 to the recent Muslim and African bans, barring racial, ethnic and cultural minorities is not particularly innovative. Indeed, it is the same xenophobia, but the subject of official derision simply evolves in response to the political, social and economic context. This panel examines root causes, manifestations and practical policy responses to such legal measures with an eye on the next four years.

Finally, the two-day policy summit concludes with a session that explores best practices for individuals, communities and institutions to serve as effective anti-racist allies.

In closing, we hope that you will join us for this cutting-edge summit. Indeed, this is your ABA, and together, we can ensure a better tomorrow for all.

Engy Abdelkader is chairwoman of the ABA Section of Civil Rights and Social Justice Rights of Immigrants Committee and a fellow with the German Marshall Fund of the United States. She teaches at Rutgers University.