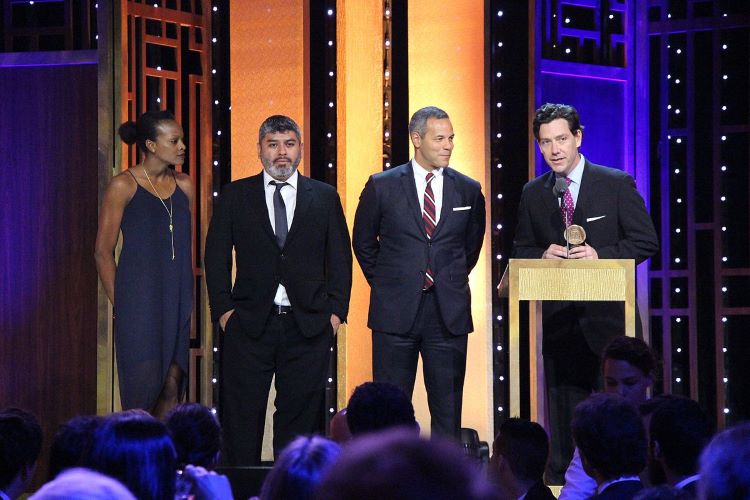 The crew of “Real Sports with Bryant Gumbel: The Killing Fields,” including reporter David Scott and segment producer Chapman Downes, at the Peabody Awards in 2016. Photo by Sarah E. Freeman/Grady College, CC-BY-2.0, via Wikimedia Commons.

I regularly receive letters from incarcerated individuals. It’s not lost on me that after reading the preceding statement, those of you who regularly follow this column and know I practice criminal defense likely think, “Well, duh. ... You probably have clients in jail, and they probably send you mail.”

While that’s true, and a fair share of the jail mail I receive is from my incarcerated clients, the overwhelming majority of prisoner correspondence I receive is from individuals soliciting my services. I’ve done this job long enough to feel comfortable in believing that word of mouth spreads, and when you couple that with the admission that not all of my clients escape prison, I’d wager my name gets thrown around those facilities from time to time.

I always respond to the letters I receive. Even if it’s just to let the inmate know that I don’t have the time on my docket to take their case right now, I don’t think it’s right to leave someone hanging for a reply. I want them to know they are being heard because living in that environment creates a world where your voice constantly falls on deaf ears. I don’t like to contribute to that reality.

So, it’s possible that my replies are held onto or passed around. They are on my letterhead, which contains my mailing address, so maybe that’s where inmates find me. I’ve never pinned down the reason why, but it doesn’t change the fact that, as I mentioned, I receive quite a few letters from prisoners every week. That’s why a recent segment of HBO’s Real Sports with Bryant Gumbel caught my attention.

Who is Keri Blakinger?

Once a promising young figure skater with potential Olympic-level talent and aspirations, Keri Blakinger has become one of the United States’ most prominent writers on life in prison. How did she get there? Her story is one we’ve seen repeated all too often, although the final stanza thus far is much more inspiring than most other iterations.

The segment describes her as “obsessed with discovering the truth about life behind bars.” However, that description might be a bit misleading since Blakinger knows all too well the struggle of living in a cage. After all, she spent over two years in prison prior to her current career.

The crime that led to her stint in the penitentiary wasn’t necessarily due to the same catalysts we see so often. Her upbringing, by all accounts, was positive and privileged. As mentioned earlier, she had a burgeoning career as a potential Olympic figure skater—which her parents seemed to completely support by all accounts—before an eating disorder began to affect her health and ability on the ice.

When it appeared that her skating career was likely over, she faced a difficult realization: Skating had become so synonymous with her identity that once it was no longer available, she was left with a huge hole to fill. Sadly, that is where her story does begin to resemble so many other inmates. She attempted to fill that hole with illegal drugs, namely heroin.

After living on the streets and turning to sex work to finance her addiction—all the while still in high school—she was convinced to enter rehab. Afterward, she was accepted into Cornell University. Her drug addiction followed along. A failed suicide attempt (taking a 100-foot plunge off a bridge) was later followed by an arrest for possessing approximately $50,000 worth of heroin, which ultimately resulted in her prison sentence.

It was there that she experienced firsthand how the American prison system is “fundamentally broken.” Through documenting her experience in lockup, she found a passion for writing.

Once released, Blakinger began writing for small newspapers until she received her break reporting for the New York Daily News. Word quickly spread throughout prison facilities and the inmates housed there about the investigative reporter who had done hard time herself. Incarcerated individuals began reaching out to her systemically, sharing tips for stories. But they also sent plenty of other letters, arts and crafts, and thank-you cards Blakinger keeps to this day.

The benefits of jail mail

It probably goes without saying, but these days the inherent benefits of being able to communicate with clients via written letter mostly only apply to those practicing criminal law. Very few, if any, attorneys in other areas of practice need to carry on written, mailed correspondence with their clients. Email is much more convenient, and records regarding the content of the communication, along with its delivery and receipt, are easily maintained when using electronic writing.

Email isn’t always a possibility in criminal defense, though. For those defending the accused, the postal service is often the only means of communicating with clients. Sure, some facilities have upgraded capabilities to allow inmates to send electronic messages, but in my experience (at least in Oklahoma), those facilities are few and far between.

There is always the option for a phone call, but it’s challenging to get that scheduled with a client who must comply with inmate count multiple times a day, not to mention periodic lockdown due to various factors. Consequently, the written word is often the best method to converse with someone who isn’t at liberty to communicate in the means and methods we usually take for granted on the outside.

The problems with jail mail

I’ve already mentioned the solicitation aspect of jail mail. Those letters can become tough to keep up with if you pride yourself on actually reading the correspondence. Still, that is an incidental inconvenience at the end of the day, and it’s ultimately more beneficial than burdensome, probably.

What is far more troublesome, though, is the relatively recent trend of individuals appropriating law firm names and their mailing addresses for illegal purposes. Oklahoma’s Department of Corrections and other local law-enforcement agencies have started opening many letters we send our clients because inmates and their connections on the outside have hijacked this long-used form of attorney-client communication.

Individuals have started sending contraband inside envelopes addressed to inmates, purportedly from attorneys. They write “legal mail” on the outside of the envelope, believing it will get past the gatekeepers. The fact that law enforcement is taking preventative and preemptive action to screen these types of correspondence infers the scheme has been at least somewhat successful in the past.

Nevertheless, while I understand facilities’ obvious interests in keeping contraband out of their institutions, I worry that opening letters marked as “legal mail” is a slippery slope at best and subterfuge at worst. One can imagine all sorts of issues that could arise from law enforcement policies that allow them to open and view legal correspondence. I don’t know how other attorneys send their letters, but I do my best to ensure nothing is visible unless the letter itself unfolds. Regardless, we’re still forced to take the staff’s word they won’t read the text.

Still, it wouldn’t be far-fetched for an attachment to “fall out” when the letter is opened. That could result in valuable information being lost or delayed. Such an error could result from an accident, or it could be due to outright malicious behavior. For example, I recently sent an affidavit to an inmate. When I received the affidavit back, it was signed and notarized—but it had been cleanly cut in half.

I like to think the slice was due to a letter opener error. My cynicism makes me wonder, nonetheless.