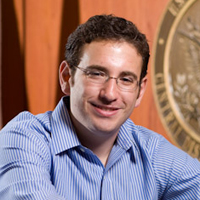 Adam Reich knew early on it would take more than just good lawyering to free his client. It would take a movement.

So he set out to start one.


Adam Reich knew early on it would take more than just good lawyering to free his client. It would take a movement.

So he set out to start one.Reich was a second-year student at the University of Southern California’s Gould School of Law when he enrolled in the school’s legal clinic program, the Post-Conviction Justice Project. The project’s work includes advocating for women convicted of first- and second-degree murder.

Among Reich’s assigned cases: a parole hearing for Connie Keel, who entered prison two years before he was born, convicted on a first-degree murder charge for sitting in the car while her abusive husband, unbeknownst to her, robbed a liquor store and killed the clerk.

She had stood before the parole board five times, only to return to a cell; Reich’s task was to make six a success. And he did. On April 1, Keel walked out of prison into the waiting arms of her family.

Luck had little to do with her release. More accurately, it was because a bespectacled New Yorker—a former private eye with a tie collection—used his youthful vigor, ideology and, yes, some chutzpah to harness the power of the World Wide Web and wage an all-out campaign to win her freedom.

Most Obama-era 20-somethings understand how the Internet and social networking can unite people behind a cause, and the 26-year-old Reich is no exception. “I wanted to find a way to reach out to everyone,” he says of his strategy in the Keel case.

The support would come in handy, not necessarily during the parole board hearing—both Reich and his supervising attorney believed they had a strong case—but afterward, when the final decision went to media-savvy Gov. Arnold Schwarzenegger.

Problem was, Reich wasn’t really a techie, taking more of a “what I need when I need it” approach to technology. His best friend, Elliot Darvick, however, did know how to code (he’s an independent social media consultant who also works full time for an Internet company). So together they worked to create the campaign’s online hub, FreeConnie.com.

Darvick created an elegantly designed site to display text, links and video, along with oversize buttons for uploading information to Twitter and Facebook (JPG). Visitors could even send a message to the governor through the site.

Content was Reich’s domain. He told Keel’s story economically and logically while cherry-picking family photos based on their sentimental appeal.

Having the site wasn’t enough, of course. Reich had to get people to visit it. So he called on friends with Manhattan and Los Angeles PR experience, and he drafted and issued press releases. He also worked the streets, handing out fliers and giving away T-shirts, all emblazoned with “FreeConnie.com.”

After the governor announced he would not challenge the parole board’s release recommendation, Reich made myriad media appearances, including a segment on the CBS Early Show along with Keel. The two remain popular: The site still gets traffic, and they may appear together again at a national women’s conference in Los Angeles. There’s talk of a book deal.

With justice done for Keel, however, Reich’s life is full of possibilities and potential. He’s penning an advocacy manual for clinic students, considering whether to get involved in a challenge to a recent criminal law proposition he disagrees with, and spending time with his girlfriend.

First up, though, is securing a job. He juggled interviews with law firms during the Free Connie campaign, and he spent the summer clerking at Paul, Hastings, Janofsky & Walker, where he was diligently working toward an offer. Rather than criminal law, Reich is trying to steer his career toward complex litigation, the kind where he can work on paying-client matters along with pro bono cases.

But Reich thrives on a saturated life. On a recent sunny LA day, he and Darvick went to brunch together. “I told him I am starting to get itchy again,” Reich recalls. “I feel like we need some next great project to get involved in.”