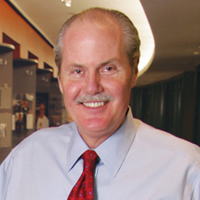 Not every attorney keeps a tombstone in his office. But Chip Mellor is not your average attorney.


Not every attorney keeps a tombstone in his office. But Chip Mellor is not your average attorney. As founder of the Institute for Justice, which claims to be the nation’s only libertarian public interest law firm, Mellor keeps the headstone as a reminder of the fight he waged on behalf of a Tennessee pastor who wanted to sell caskets, but was blocked by local morticians and a state law that required he be trained in mortuary science.

“Our clients, who wanted to sell their caskets at a discount, … were told by the state of Tennessee that they couldn’t do that,” says firm spokesman John Kramer. “So [Mellor] went to court on their behalf and ended up opening up the market.”

TENNESSEE’S CASKET MONOPOLY
Put To Rest
AUGUST 21, 2000
In The U.S. District Court For The
Eastern District of Tennessee
By The
Institute for Justice
And Its Clients
LONG LIVE LIBERTY!

Since its founding in 1991, the Institute for Justice has taken on the role of “litigating for liberty,” says Mellor, 58. The casket case is representative of its commitment to economic liberty.

“We’re always looking for cases that showcase the fundamental injustice of refusing to protect people’s right to earn a living,” says IJ senior attorney Clark Neily. “The ultimate goal is … to persuade the courts to reinterpret the privilege or immunities clause of the 14th Amendment to include protection for the right to work.”

That will take some doing. It requires reversing the U.S. Supreme Court’s 1873 Slaughter-House Cases, which involved butchers in New Orleans who challenged a state law requiring them, in effect, to work with a state-approved slaughterhouse monopoly or find another profession. In the first major case interpreting the 14th Amendment, the court ruled 5-4 that only those privileges or immunities granted by U.S. citizenship are constitutionally guaranteed. State restrictions that don’t conflict, like those of Louisiana, were unaffected by the ruling.

Economic liberty is one of four pillars the foundation protects, Mellor says. The others are free speech, parental choice in education and protection of private property.

Mellor’s typical client is someone who lacks the means to fight in court. Institute staffers comb the news media to find worthy clients; only one case walked into the IJ offices, Kramer says.

But those causes have resulted in some major Supreme Court wins (with varying IJ participation), including Zelman v. Simmons-Harris, which upheld the constitutionality of school choice; Swedenburg v. Kelly, which permitted the interstate shipment of wine to consumers; and District of Columbia v. Heller, which struck down the District of Columbia’s ban on handguns.

The institute takes on cases across the nation free of charge. It has branched out from its headquarters in Arlington, Va., into Minnesota, Texas, Arizona, Washington state and Illinois, where it operates a free legal clinic at the University of Chicago Law School.

And it’s immaterial to Mellor whether he wins in a court of law or in the court of public opinion. If he loses at litigation, he will appeal to the legislature.

His firm lost Kelo v. City of New London, the landmark 2005 eminent domain case in which a homeowner challenged the city’s right to give her property to a private developer as part of an economic development plan. When the Supreme Court ruled 5-4 against her, Mellor lobbied the legislatures of all 50 states; 43 went on to change their eminent domain laws to protect the property owner, he says.

The Susette Kelo story is one of several told in videos on the IJ website. They include humor and music, highlighting the work of the lawyers George Will dubbed a “merry band of litigators.” The firm’s motto: “We change the world and we have fun doing it.”

Mellor’s crusade in public policy law grew out of his experiences at Ohio State University in the early ’70s.

“I became convinced the law offered a final avenue for social change,” he says. “There was an epiphany that occurred in the midst of protests in the Vietnam War. I saw the left and the right were really after the same end: to capture government power for their best purposes, to make other people do what they wanted them to do.”

A couple of years after graduating from the University of Denver law school in 1977, Mellor went to work for the Mountain States Legal Foundation, eventually leading it until he was forced out by the foundation’s board over a free speech issue. He worked in the Reagan-era Department of Energy and as president of the Pacific Research Institute for Public Policy in San Francisco before creating the Institute for Justice with Clint Bolick, a friend and former colleague at Mountain States.

Both men convinced oil and gas magnate Charles Koch to provide $350,000 in seed money the first year to get the institute up and running. Now 70 percent of institute funding comes from individual donations and 30 percent from foundations. It takes no government funding and is not affiliated with the Libertarian Party.

Mellor may be jovial, but he doesn’t joke around when it comes to his cases. He literally broke his back in 2001 after a snowboarder plowed into him on the slopes of West Virginia, Kramer recalls. Four days later, Mellor was in a New York courtroom, heavily dosed with Tylenol, arguing on behalf of van drivers who later won the right to continue driving their routes in New York City.

And what does the institute expect for the future—a stunning courtroom success that will put it out of business?

“It would be great to be put out of business,” Kramer says, “but as long as there is a government, we will be around.”