Deborah Z. Read: A new ‘PaTH’ for her firm

As is her way, Deborah Z. “Debbie” Read used the five months from the time she was elected managing partner until beginning the job in May 2012 for deep-dive research and analytics.


As is her way, Deborah Z. “Debbie” Read used the five months from the time she was elected managing partner until beginning the job in May 2012 for deep-dive research and analytics.

She read everything she could find in the Thompson Hine library on problems facing law firms, particularly on the heels of the 2008 recession.

“As I was preparing for this role,” Read says, “it became clear that the way law firms deliver services was not in line with what clients want in an economic downturn.”

A tax lawyer specializing in nonprofits (with clients such as the Rock & Roll Hall of Fame), Read, 59, is, by professional nature and instinct, cautious. But she was confident enough to take what some saw as a big risk as soon as hand touched helm.

At the next all-partners meeting of the nearly 400-lawyer, seven-office, 105-year-old Cleveland-based firm, Read sketched out the beginnings of fundamental changes and how they would operate. That redirection in some ways reflects her nature, in that it is analytical in practice and geared to efficiency. 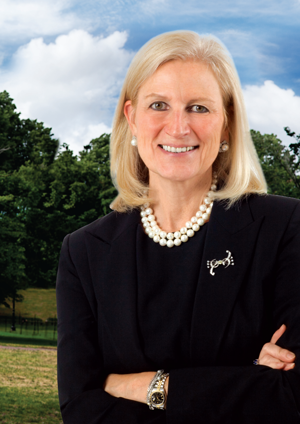 “She told us that the world is changing, our markets are changing and the way lawyers do business has been changing for several years,” recalls Brian Lamb, who was on the firm’s executive committee and now is the business litigation practice group leader. “Things were changing in small ways, but because Debbie was very attuned to the market and clients’ needs, she not only had the vision for what’s coming around the corner in terms of what clients are asking for now but also where it will lead us and what will they be asking for five years from now.”

With its own special touches and tools, Thompson Hine began retooling and changing approaches to practice, and in 2014 it launched SmartPaTH (the “TH” is the firm’s initials), an institutional and structural framework for the firm and its work based on four prongs:

“I can’t sing the praises of SmartPaTH enough,” says Geri Presti, general counsel and executive vice president of Cleveland-based Forest City Realty Trust Inc. When her company wanted to do a reconversion and become a real estate investment trust in just 11 months rather than the typical 18, Thompson Hine sent Bill Garcia, the firm’s project manager, to help with the plan. That included drawing up checklists, timelines, and assignment accountability and responsibility outlines for dealing with the Securities and Exchange Commission, the IRS and a host of other matters.

“It was daunting,” says Presti, “but they have it down.”

And of Read, Presti says, “I work with a lot of firms around the country, and they are the cutting edge, and Debbie is the thought leader on client relationships.”

Thompson Hine had been early to the game of focusing on client needs, having formed 50 client service teams within the firm several years earlier and holding annual “client summits” in 2006. The firm pays all expenses to bring senior-most leaders or general counsel from 25 to 30 major clients for a day and a half of guest speakers, presentations on substantive legal matters, talks about transforming legal departments and networking.

The clients, not the lawyers, are the focus, Read says. That is the biggest lesson she learned in her research. She had pored over several years of the consulting company Altman Weil’s annual Chief Legal Officer Survey, which teases out the likes, dislikes and needs of corporate clients.

Read saw the same results year after year: a median score of 3 on a scale of 10 in answers to a question about the willingness of law firms to change delivery models rather than simply lower their rates.

“Our industry wouldn’t move off of 3,” says Read. “To me, that is an opportunity. We can do better than 3 for sure.”

In March, the firm was among the top seven in the country cited for innovation as “client service strategists,” in a survey of corporate counsel by the BTI Consulting Group.

How Read—who typically works some nights and at least one weekend day—finds time for community activities, such as several volunteer boards and co-chairing the 2015-16 campaign for the United Way of Greater Cleveland, is a good question. And how she got the firm moving at near-full speed toward client service set her apart yet again.

“It’s been interesting to watch how Debbie set this vision for us and then how she goes about getting buy-in person by person, practice by practice and office by office,” Lamb says. “She didn’t do it alone. She tapped the early adopters and empowered them as agents of change and good ambassadors.”

At partners’ meetings, Read set up panels of the firm’s lawyers, partners and associates alike, who had used the smart tools successfully and to the clients’ liking.

“The sharing of success stories is one of the smartest thing she’s done,” Lamb says. “Debbie staked out what our spot is, and we’re going for it.”