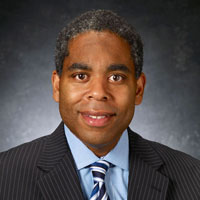 Besides a Plan B, Emery K. Harlan almost always has a Plan C, D, E and F. So when he decided to leave a large Chicago law firm to practice in Milwaukee—for substantially less money—friends were surprised but not worried.


Listen to the podcast below to hear Emery Harlan talk about how the recession is helping some NAMWOLF members.

Besides a Plan B, Emery K. Harlan almost always has a Plan C, D, E and F. So when he decided to leave a large Chicago law firm to practice in Milwaukee—for substantially less money—friends were surprised but not worried. At the time Harlan was a Ross & Hardies associate who had recently met an in-house lawyer looking for Milwaukee lawyers of color. Harlan first tried to get the work for his firm, but he ultimately determined that what the general counsel really wanted was a Milwaukee minority-owned law firm that handled business matters.

A University of Wisconsin Law School graduate, Harlan tapped his alumni connections but couldn’t find such a firm. He also found that many Wisconsin agencies had minority- and women-owned business programs, but most hadn’t met their goals.

“I thought this was a tremendous opportunity,” says Harlan, who moved to Wisconsin in 1994 to practice with Gonzalez Saggio & Harlan. An employment lawyer, he’d never even taken a deposition before joining the firm.

“I would tell people I took a 70 percent pay cut, but the quality of my life is much higher,” says Harlan, 44. “It was a perfect move.”

The firm grew over the years, and a large part of Harlan’s work involves networking with minority lawyer organizations. He and another partner, Gerardo H. Gonzalez, noticed most of the groups were lacking in what they offered to law firms owned by minorities or women, focusing instead on attorneys with majority firms. In 2001 they founded the National Association of Minority & Women Owned Law Firms.

NAMWOLF provides networking opportunities for in-house counsel, as well as women- and minority-owned law firms. The firms must have corporate references, proof of $2 million in malpractice insurance and a Martindale-Hubbell AV rating to join.

Initially, Harlan says, the association didn’t have many in-house lawyers and it was difficult to convince outside firms to join because the group hadn’t yet demonstrated membership benefits. But when Harlan shared his goals with prospective members, many were convinced. The annual meeting includes a law firm expo where in-house lawyers can spend time talking to NAMWOLF members and measure their experience against existing counsel.

“I know of a women-owned law firm that was selected through that process by Accenture,” Harlan says. “They got to know them, interview them and they’ve enjoyed a long-standing relationship.”

In October NAMWOLF held its annual meeting in Chicago. More than 140 in-house lawyers attended from companies like MillerCoors, Wal-Mart and AT&T.

There was an event that honored Joseph K. West, Wal-Mart’s associate general counsel, and Harlan says some large law firms wanted to partner with NAMWOLF for it. Others asked whether they could send a few lawyers to the award ceremony. Both requests were nixed.

“Our goal is to educate and expose in-house counsel to the talents and abilities that exist in women- and minority-owned firms—and eventually enable those firms to compete with majority firms for every type of legal project,” Harlan says. “Right now, most of our firms specialize in litigation. We want to make sure that our firms are positioned to get the bet-the-company cases as well as major transactions.”

Previously, Harlan says, companies had the luxury of making business decisions on noneconomic factors, for instance giving work to lawyers who looked like themselves and had similar life experiences. Now, general counsel have more pressure to cut legal costs, he adds, and there are many minority- and women-owned law firms that do the work for substantially less money.

“For the last 20 years we’ve been having the same discussion—we’ve got to get the big firms to do a better job at diversity,” Harlan says. “Well, they’ve had their opportunity, and the reality is the numbers suggest they’re not getting it done.”

“He understands not only your business, but also if there are any dynamics, and what are the personalities managing the work,” Borders says.

In law school, Borders recalls, Harlan was a leader. He always knew who had the best outlines and what the best study habits were. He also knew the history of many Wisconsin alums and who the best contacts would be.

Victor Henderson, executive partner in charge of Holland & Knight’s Chicago office, met Harlan when they were both new lawyers. Their group of friends would often go to Heaven on Seven, a popular Cajun restaurant in Chicago.

“There would be 90 people outside the door. Em had a relationship with the owners, so we would slip in the back door and get a table,” says Henderson, who describes Harlan as a “shrewd businessman.”

“He’s found a pleasant intersection between being nice, polite and honorable, yet maximizing his firm to be profitable,” Henderson says. “There are hard-nosed businesspeople, but Em is just a guy you can trust.”