When a drafting error made it all the way to the U.S. Supreme Court, Gurinder “Gary” Sangha started thinking.

In King v. Burwell, the fight was over the language Congress used when it passed the Affordable Care Act. The law referred to “an exchange established by a state,” so the plaintiffs argued that no tax credits were available via federal exchanges. But without those tax credits, the whole system could collapse.

“I just thought ‘Wow, I can’t believe that millions of Americans could lose their health care because of a simple error by a staff attorney,’” says Sangha, 37.

Sangha is a lecturer at the University of Pennsylvania Law School and a fellow at CodeX—the Stanford Center for Legal Informatics. That gave him access to both universities’ computer science and linguistics departments.

So he talked to some researchers in computational linguistics, which uses computers to solve problems related to human languages. They said they could help. 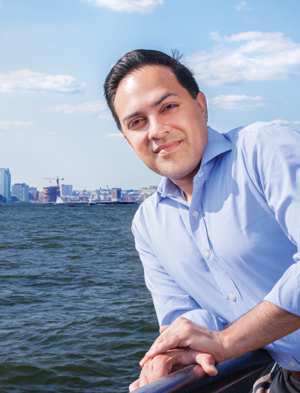 Ambiguities and errors like that matter. Lit IQ’s internal research found about a quarter of commercial disputes include a dispute over contract language.

Lit IQ is still a young company; it launched its software early this year and has been raising money through venture and angel capital. But it’s not Sangha’s first legal technology startup. His previous venture, Intelligize, allows users to search SEC filings, corporate documents, transactions and other documents useful to corporate attorneys. It’s been successful enough—its clients include Fortune 500 companies—that Sangha was able to step down at the end of 2013.

Shipra Dingare, lead engineer at Lit IQ, says the experience is paying off.

“It’s nice when the person in the driver’s seat is someone who really knows what they’re doing,” says Dingare, who trained as a barrister in the United Kingdom. “He knows about getting investment. He knows what investors are looking for. He knows what’s going to be compelling” to law firms.

These days, Sangha spends most of his time at Lit IQ’s headquarters in New York City, but he also visits Penn and Stanford. He’s also an attorney in good standing with the state of New York. Before making the jump to entrepreneurship, he practiced securities law for Shearman & Sterling in New York City and White & Case in Hong Kong.

Jeremy Low worked with Sangha at White & Case’s Hong Kong office in 2003 and has kept in touch. Sangha was an excellent lawyer, Low says, but that wasn’t enough for him.

“I would say he wanted something bigger than the law firm track and had more vision than your average lawyer, which are obviously qualities that have helped him to achieve what he has,” says Low.

Sangha says his legal background helps him understand what his companies’ clients need. It doesn’t hurt that he’s surrounded by lawyers in his professional and personal lives. Even his wife is an attorney: She’s currently clerking for a Brooklyn judge.

But he attributes his entrepreneurial bent to his background as the son of Indian immigrants to Canada.

“I’ve been told I’m the only serial legal-tech entrepreneur,” he says. “The fact that my parents took these big gambles … I think gave me the confidence to make these jumps into entrepreneurship not once, but twice.”