Haben Girma: Leading the way for people with disabilities 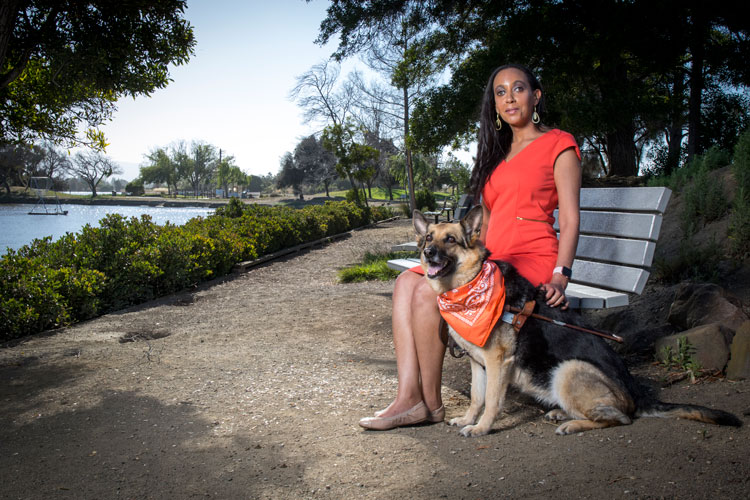 Haben Girma, a Harvard Law School graduate, has limited hearing and vision and refers to herself as “Deafblind.”

“It should be one word, no hyphen, and I prefer to capitalize the D because it’s a cultural identity,” says Girma, 29, a former Skadden, Arps, Slate, Meagher & Flom fellow whose work centers on consulting and public speaking about the benefits of fully accessible products and services, as well as hiring people with disabilities.

On her website, she even gives the news media tips on how to report on disabilities.

Before she went into consulting, she practiced litigation for 2½ years with the nonprofit Disability Rights Advocates. “Litigation is powerful, but I feel like a lot of the accessibility barriers are due to lack of education,” Girma says. “I feel like I have a unique talent to inspire and motivate people to remove those barriers.”

Written English is Girma’s strongest form of communication. When speaking with someone in person who also speaks English, she asks the person to type their words on her wireless, Bluetooth-equipped keyboard, which sends the communication to her braille computer.

“What I love about the keyboard is that almost everybody is used to typing on a keyboard,” says Girma, who’s been using the devices to communicate since 2010. “Nobody told me ‘Hey, these new [braille] devices now support Bluetooth, and you can connect them to a Bluetooth keyboard.’ I had to do the research and figure it out.”

Former President Barack Obama, who met with her at the White House in 2015 at a 25th anniversary celebration for the Americans with Disabilities Act, is among those who have used Girma’s wireless keyboard.

She also used the communication method in court while representing the National Federation of the Blind in an accessibility lawsuit brought against Scribd, a digital library subscription service. Scribd argued that digital places didn’t have to be ADA-compliant. The case settled in 2015 after the company lost its summary judgment motion in the U.S. District Court for the District of Vermont.

Daniel Goldstein, a Baltimore lawyer who worked with Girma on that case, says she’s good at solving problems.

“If you are a person with a disability and you want to lead the life you want, then you need to be a good problem-solver,” he says. “That’s also an important quality for a good lawyer. Clients are always looking for you to solve problems in practical ways.”

Goldstein hopes Girma might come back to litigation work someday. She’s also a good writer, he says, and was never intimidated about debating a legal theory with an older lawyer like himself.

“If she was excited about an idea and I wasn’t, she didn’t give up after the first try, which I liked,” Goldstein says.

Girma, who identifies as a first-generation immigrant, is the daughter of an Ethiopian father and Eritrean mother.

She started her consulting and public speaking business in 2016 and gets work through friends, traditional media and social media. She recently created a mailing list, which shares links of her and her guide dog, Maxine, working and exploring together. The first clip features the two climbing a large dome at the City Museum in St. Louis.

“Most museums instruct patrons not to touch exhibits, limiting access for blind patrons,” Girma says. “The City Museum is an incredible place that fully encourages patrons to touch exhibits.”

In her spare time, Girma enjoys dancing and surfing. Sometimes she rides the board by herself, and other times she’ll do tandem surfing with another person, using a larger board.

“I reached out to several surf schools in San Diego. Most just ignored me or said, ‘We have no idea how to make it work,’ ” says Girma, adding that two of the businesses sent back positive responses. “They said, ‘We don’t know if this will work, but let’s try; we’ll have fun learning,’ ” Girma says. “It was a ton of fun.”