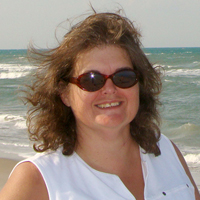 It started out as a two-month road trip. Now, more than a year and a half later, Asheville, N.C., attorney J. Kim Wright is finally resting (temporarily) from crisscrossing the country and producing hundreds of video clips while she chronicles the collaborative law and restorative justice movements in the United States.


It started out as a two-month road trip. Now, more than a year and a half later, Asheville, N.C., attorney J. Kim Wright is finally resting (temporarily) from crisscrossing the country and producing hundreds of video clips while she chronicles the collaborative law and restorative justice movements in the United States. Wright, 51, is the creator of Cutting Edge Law, a documentary website that features video interview segments, blog entries, podcasts and articles from legal professionals committed to a holistic approach to the practice of law.

“It’s an evolution of the legal profession so that lawyers are peacemakers, problem-solvers and healers of conflict,” explains Wright, a family-law solo practitioner.

The arguments, analyses and precedents of the adversarial legal system civilized the jousts and duels of earlier times. Now, Wright says, is the moment for lawyers to enter the next stage of legal problem-solving.

“This [collaborative] movement is expressed in a lot of different ways depending on what area of law it’s being applied to,” Wright says.

For Wright, traditional legal practice appeared to be a miserable existence, one she put off for nearly three years after graduating from law school. “I decided I didn’t want to be one of those jerks who was doing the adversarial thing,” Wright says. “Not only was I not a lawyer, I was adamantly not a lawyer.”

Wright performed a variety of nonlegal jobs for the next couple years, including operating a domestic violence program and recruiting volunteers for the American Heart Association. While in Atlanta for a program, she met the late Forrest Bayard, who described a different way of practicing family law. The Chicago-based lawyer told her that his divorce clients were friendly at the end of proceedings, and that he practiced law with dignity.

“It was like what you see on TV,” Wright laughs. “The sky opens, birds fly and butterflies appear. I thought, ‘I could do that.’ ”

Wright immediately took the bar and hung out her shingle. She soon realized, however, that while she could control her relationship with her client, the system wasn’t designed to work that way with the other side.

“I did my first custody case: I won and my client was miserable,” Wright says. “I said, ‘There’s got to be something better than this. I did everything they taught me in law school. I won, but she’s miserable.’ ”

When another client who’d won custody told Wright she’d rather give up her children than endure another court battle, Wright reached out to Bayard and began to research other lawyers, including collaborative law pioneer Stuart Webb of Minneapolis, who had successfully incorporated these models into their practice.

As she continued her practice and research, Wright discovered even more alternatives, including ways to transform juvenile justice into a more balanced and restorative justice system. (In addition to raising her own two children, Wright was mother to 14 other kids—stepchildren, foster children and runaways—from 1977 to 2003.)

One year after attending an International Alliance of Holistic Lawyers conference in 1999, Wright launched her first website, Renaissance Lawyer, to serve as a placeholder for a 400-page online book she had written on transforming the practice of law.

“I was so painfully shy that I didn’t want anybody to look at it,” Wright says. “But it actually went off like a rocket. A lot of people started calling me, and the site had 100,000 unique visitors each for the first couple of years.” She held a Renaissance Lawyer teleconference in January 2001 that led to formation of an organization under the same name later that year.

The rapid growth of the Web finally caught up to Wright’s ambitions. In 2008 she taught herself Drupal, an open-source content management system, and in March of this year she launched the online platform described on one page as “Cutting Edge Law: A movement. A magazine. A community. A documentary.”

And she did this while on the road. Inspired by the stories of lawyers she’d met at a 2007 restorative justice conference, Wright began to capture her interviews on film.

“I knew we were reaching a tipping point,” Wright says of the growth and support she witnessed at different alternative-practice conferences that year, “and I was ready to do something different.”

Wright closed her law office in early 2008 and, together with freelance videographer and photographer Michael Matthews, traveled to the IAHL conference in Florida as a trial filmmaking run. Matthews edited the hourlong interviews into 10-minute segments, and Wright posted them to the Web.

As the duo collected more and more footage, they quickly realized the interviews not only honored people changing the legal profession but also provided valuable insight and role models for other attorneys.

“Each couple of weeks, we would say: ‘Let’s go to the next place,’ ” Wright says of the project, which has taken them to 27 states from Texas to Wisconsin and on both coasts. “There was never a plan; it evolved as we went along.”

Today, Matthews is in New Mexico steadfastly editing clips for the website, which receives 20,000 to 30,000 unique visitors each month, and compiling tape for several planned documentaries as well as 3-minute mini-versions of each interview.

Wright is back in North Carolina as she completes a new book for ABA Publishing on lawyers as peacemakers. Then she will be off to Key West, Fla., to prepare the next stage of her business plan, which includes harnessing the estimated $1 million worth of content she and Matthews have created.

“My life’s work is about transforming how law is practiced in any way I can,” she says. “Lawyers need to know that they are not alone, that there is a movement in the law that is healthier for them and society—and they can participate in it.”

J. Kim Wright writes that the time for transformation of the legal profession is now.