Food service safety and revamping government may have little in common, but they show up as just part of the resumé for lawyer-entrepreneur Manik Suri.

Suri co-founded the Governance Lab, which aims to improve how government works through “open and collaborative problem-solving.” And he now leads MeWe, a company with an app focused on food-service regulation and compliance through mobile applications.

His experiences as a White House intern showed him that government could be more efficient, and that technology would play a large role. “We saw social and commercial technology that changed the way we do everything,” says Suri, a 2011 intern with the National Economic Council. “And in government, we saw the opportunity to do more in that space.” 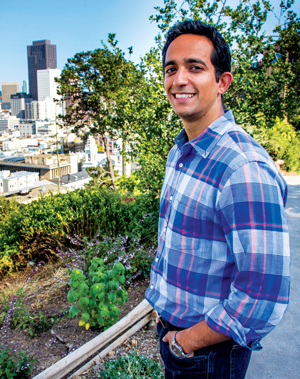 Suri helped the project secure more than $5 million in funding from organizations including the John D. and Catherine T. MacArthur Foundation, the John S. and James L. Knight Foundation and Google.org. He also worked on GovLab projects, including an open-data blueprint for the National Health Service of England focusing on improving accountability, consumer choice and efficiency in health care.

Suri, 33, says his year with GovLab inspired MeWe: “I saw an opportunity to use technology to improve government at the other end of the spectrum, hyperlocal, specifically focused on local government inspections.”

The MeWe CoInspect app, launched in 2014, is an electronic tool for quality and safety inspections. It reminds workers about rules in real time, helps perform audits and line checks, and offers simplified code definitions, as well as reference pictures.

“With the app, employees can take photos and make notes that are time-stamped, so it’s easier to see what is actually being done, and how well it’s being done,” Suri says.

The app works for businesses or government agencies, Suri says, in a variety of industries. They have 75 clients, most of which are in the food industry. A subscription starts at $25 a month, and pricing depends on the number of users and locations. Suri sees businesses sharing the app’s data with government inspection agencies as a form of self-reporting that’s audited.

“I think what Manik is doing is moving inspections into the hands of food businesses themselves, giving them the tools to make a culture of safety easy and efficient,” says Dr. Rajiv Bhatia, the former medical director of occupational and environmental health with the San Francisco Department of Public Health and a MeWe adviser.

Law is Suri’s second career. After graduating from Harvard College in 2005, he got a master’s degree in international relations from Cambridge University and then spent three years at the global investment firm D.E. Shaw & Co., focusing on investment opportunities in China and India.

“Things were being done on multiple devices, including log books, and information would get lost. It took two to three hours to create a report on an inspection that took 90 minutes,” says Suri.

He saw that the challenges of housing inspections and the food industry were similar and started working with various local food businesses, including food trucks. To Suri it seemed that self-inspections, validated with time stamps, geolocation and photos, could encourage better compliance with food trucks than the city health department’s paper-based spreadsheets—as well as save the agency time and money.

The child of two doctors who immigrated to the United States from India, Suri moved from New York to Fresno, California, with his family at age 10. His father, a pediatric neurologist, wanted to settle in a smaller community with warm weather.

Both moving to California and going to Harvard College from public school in Fresno were transformative experiences for Suri. Friends say that both influence how he relates to people.

“He’s deeply intellectual about how he approaches a problem, but he always has a plan to figure out what the real and concrete things are that can be done for solutions,” says Andrew Crespo. A criminal law professor at Harvard, he and Suri lived together as undergraduates.

“He’s always trying to learn everything he can about each new challenge he encounters, and he does that by seeking out people and asking them questions in a way that’s really inviting,” Crespo adds. “He’s a great conversationalist.”