Maurits Barendrecht: Justice for the World 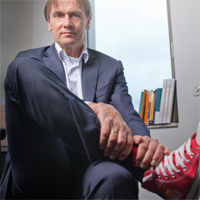 A law professor and former partner at one of the Netherlands’ largest firms, Barendrecht, 55, is academic director of the Hague Institute for the Internationalization of Law and co-founder of the Innovating Justice Forum. The forum is a platform that nurtures innovative legal initiatives through shared knowledge and expanded support networks for lawyers, courts, governments, nonlegal organizations, nongovernmental organizations and administrators of justice.

“We didn’t want The Hague to only be known for classic international law, but also for innovation in the field of justice,” Barendrecht says of the forum, sponsored by the city and the Dutch Ministry of Economic Affairs, Agriculture and Innovation. “But we saw that just publishing papers doesn’t have much effect. That triggered our energy and curiosity as to why innovation in the legal sector is so hard. What are the barriers? Who is changing the game and how do they succeed?

Formed last year, the forum shows how courts, NGOs, law firms and other administrators of the law can make their services more accessible and effective. It also coaches legal entrepreneurs through the steps of designing, funding and monitoring innovations in the rule of law.

One measure—implemented in Nicaragua under the guidance of Innovating Justice—involves the use of elected facilitators, or local judicial helpers, who resolve disputes and record the solutions in villages that may receive a visit from a judge only once a year. The judge is then able to review facilitator notebooks and coach them on future decisions.

“There’s a big market of justice-sector organizations looking for new ways to serve clients,” Barendrecht says, “but they need to become accustomed to the idea that it’s possible to buy things on the market that are already thought out and made into real-life working models.”

But he notes that Innovating Justice’s efforts to devise new approaches often lead to a dilemma, in that they pose a challenge to established practices: “Try telling lawyers they can improve things by breaking their rules!”

Innovating Justice represents a departure from law firm and university models, and Barendrecht says he underestimated the hard work necessary to launch a new organization, manage staff and day-to-day processes, coordinate meetings, and research and draft new trend reports. “We started from scratch and didn’t know if we’d succeed,” he says.

Nancy A. Welsh, a professor at Penn State’s Dickinson School of Law, co-taught a course with Barendrecht at Tilburg University in 2006.

“I was incredibly impressed by Maurits and the team of researchers and academics surrounding him,” Welsh says. “They were a hotbed of innovation—exploring the use of technology to improve the resolution of personal injury matters, proposing means to resolve disputes in large-scale construction matters, conducting research into the role of Dutch judges in settlement. … Maurits is never satisfied with the status quo. He is always looking for ways to improve upon the delivery of justice and to provide access to justice for those who are least likely to be given such access.”

And one forum task is never forgotten: highlighting and honoring promising developments and successful rule of law leaders on the forum’s website.

“Compared to the worlds of venture capitalism or technology, innovation in the legal profession doesn’t get as much exposure or reward,” Barendrecht says. “Part of the motivation is to give people a small place where they can shine.”

In April, the forum hosted a networking conference bringing together members of African and South Asian legal organizations, who usually have very little contact with one another. Many attendees had never thought they were working on the same types of problems, Barendrecht says. But through contacts made at the event, several took fresh looks at new methods of providing access to justice, and some formed new cross-border partnerships.

“You don’t have to convince people they need a fair, orderly and transparent rule of law,” Barendrecht says. “The main question is how to do it and where to begin.”