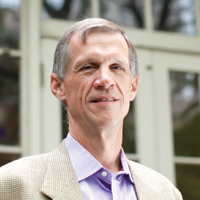 If you’re searching for David Van Zandt, look for the tall, blue-eyed man in a purple shirt.

Pride in your product, Van Zandt says, is crucial to a successful business. So as dean of Northwestern University School of Law, he wears something with the school color or a Northwestern logo every day.


If you’re searching for David Van Zandt, look for the tall, blue-eyed man in a purple shirt.

Pride in your product, Van Zandt says, is crucial to a successful business. So as dean of Northwestern University School of Law, he wears something with the school color or a Northwestern logo every day. The attire makes him instantly recognizable on the school’s Chicago campus.

That’s just a small piece of Van Zandt’s marketing and business plan, which includes seeking advice from lawyers and clients about legal education, and changing the application process to include applicant interviews and establish a preference for candidates who have professional work experience.

It’s his businesslike approach that has brought real change to the top-10 law school.

It’s a tack that’s been successful, if the U.S. News & World Report law school rankings are the measure. Van Zandt was named dean in Sep­tem­ber 1995. A few months later the U.S. News rankings listed North­western at 13, a fall of two highly competitive places. Since 2004, the school has consistently placed in the top 10 (with the exception of a slip in 2006, when it ranked 12th).

It also rates high in the ranking’s specialty areas, like legal writing, trial advocacy and tax law. Much of that is credited to innovative plans coming to fruition. For instance, in 1996 just under 50 percent of the school’s incoming students had more than two years of professional work experience. By 2008, that figure had risen to just over 80 percent.

Van Zandt has also launched a three-year MBA/JD program with the university’s Kellogg School of Man­age­ment, which includes 10 percent of the law school’s entering class. Such offerings, plus the school’s rankings success, seem to be drawing more top-level candidates. As of 2007 the school ranked fourth in highest-median LSAT percentiles; in 1996 the school ranked 14th.

So his active listening surprises those who expect academics to tell you what they’re doing rather than ask what you think.

“He doesn’t believe in sacred cows,” says Terri Mascherin, a commercial litigation partner with Jenner & Block in Chicago and a member of the law school’s board. “He has the view that to keep moving forward, one must keep changing and adopting and figuring out how to do new things.”

A slender man well over 6 feet with classic good looks, the impression he gives at age 56 is that of someone who has accomplished things many only dream of. Yet he’s approachable and down-to-earth, which may be because he has nothing to prove.

A former property professor, Van Zandt’s management experience before becoming dean amounted to one summer overseeing the repair shop of his family’s Flemington, N.J., International Harvester dealership. When he speaks about the law school today, that time seems influential.

“If a business is built for the suppliers rather than the customers, it’s a problem,” he says.

The legal profession often has a guild mindset, he posits: Members value perceived intelligence and craftsmanship. What the group sees as perfection is often rewarded by other guild members. But clients don’t always want something that is technically perfect, and they are often equally concerned with time and cost savings. Also, they value social skills as well as perceived, measurable intelligence.

“Guilds are always giving out awards and badges,” Van Zandt says, “and clients don’t really care about that sort of thing.”

Van Zandt greatly values empirical research, and it’s rare for him to hire a professor who doesn’t have a PhD in addition to a JD. He’s also devised a merit-based compensation system grounded in research, teaching and service—much different than the seniority systems most law schools use.

NU law professor Stephen B. Presser competed with Van Zandt for the dean position. Van Zandt interviewed in shirtsleeves while the three other candidates wore suits.

“He’s really smart and smooth,” Presser says. “He made it very clear that it wasn’t his idea to put himself forward. Others asked him to do it.”

“He understands that there are new players out there and new forms of organizations,” Presser says. “I don’t think everyone [on the staff] understood or signed on to that, but it’s worked.”

David S. Ruder, who was dean in the 1980s, hired Van Zandt as an assistant professor in 1985. Deans sometimes see their work as ministerial, Ruder says, but that isn’t Van Zandt’s style.

“Basically his conflict resolution is a combination of hard bargaining, a delay and compromise,” says Ruder, a former chairman of the U.S. Securities and Ex­change Com­mission who now teaches at NU. “What’s been so interesting is that he has a flair for business administration without having had the formal training.”

Van Zandt regularly writes articles about his vision for his school in pub­lications like the University of Toledo Law Review. The process helps him organize thoughts and market the school.

His marketing plan’s wardrobe component isn’t limited to the workweek, says Van Zandt’s wife and colleague, Lisa Huestis. He has golf shirts and baseball hats with the school logo, and he’s often stopped by alumni and parents of alums in airports and vacation spots. A button-down type who favors conservative clothes, Van Zandt never wore the color purple previously.

“When he first started doing that, I thought it was a little crazy,” says Huestis, a former assistant U.S. attorney in Illinois and now a clinical associate professor at the law school.

But Van Zandt’s professors aren’t surprised about his changes—es­pecially the professional ones. He welcomes different opinions, says Lee Epstein, and he always has time to listen.

“People will say, ‘Well, we’ve always done it that way. It works OK,’ ” says Epstein, whom Van Zandt hired in 2006 from St. Louis’ Washington University Law School. “But David always says, ‘Maybe we could do it better.’ ”