“We didn’t start out to be disruptive,” says John Suh, LegalZoom’s CEO. “We were set up to fix a problem. The legal system was broken, and too many people were frozen out of it.”

Suh, who has been selected as a Legal Rebels Trailblazer by the ABA Journal, was not one of the founders of LegalZoom. But Brian Lee—who co-founded the company along with Brian Liu and Eddie Hartman and was responsible for recruiting famed litigator Robert Shapiro as the company’s public face—was an old family friend. Suh was one of the only people Lee knew who had extensive experience running internet-based companies.

After graduating from Harvard Business School, Suh became CEO of the Castling Group, a company that helped retailers like J. Crew and Barneys New York create their online divisions. Suh, who served as an adviser to LegalZoom after it launched in 2001, formally joined the board of directors in 2005 before becoming CEO in 2007.

For Suh, the main goal of LegalZoom continues to be providing access to the legal system for millions of Americans who can’t afford an attorney and do not qualify for free legal services. “So much of our legal system is focused on BigLaw or access to justice for those below the poverty line,” Suh says. “What about the 84 percent or so of people between that? For them, the system really has failed.”

What Suh has done during his tenure as CEO is transform the company from a do-it-yourself outfit into one that has partnered with lawyers.

“The perception that we’re an online legal company with no human lawyers is just not true,” says Suh. “Over the last five years, we’ve embraced lawyers and become quite adept with working with them.” There have been more than 200,000 one-on-one consultations between LegalZoom customers and lawyers licensed in their respective states, he says. 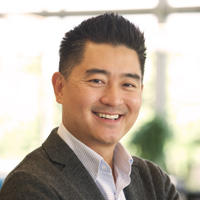 John Suh has served as LegalZoom’s CEO since February 2007 and as a member of its board of directors since February 2005. Prior to LegalZoom, Suh was CEO of StudioDirect, the internet division of a global supply chain company Li & Fung. Prior to StudioDirect, Suh co-founded and served as CEO of Castling Group, helping offline companies create their internet divisions and launching category leaders such as JCrew.com and HiFi.com. Suh received a BA in organizational behavior and public policy from Harvard College and received his MBA from Harvard Business School.