Most people see librarians as the quiet personification of technical obsolescence. Jean O’Grady is out to change that.

Far from sitting in a dusty room full of outdated books and CD-ROMs and telling visitors to keep quiet, the senior director of research and knowledge at DLA Piper in Washington, D.C., is at the forefront of pushing the legal industry toward embracing technology as a means of enhancing the practice of law. Through her acclaimed blog, Dewey B Strategic (which has been selected for the ABA Journal Blawg 100 every year since 2012), as well as through numerous public appearances and interviews, O’Grady informs lawyers about what the current legal tech landscape looks like and what kinds of innovative tools are at their disposal.

“Every lawyer is so flat-out focused on serving their clients and getting business,” says O’Grady, now a Legal Rebels Trailblazer. “Learning about technology can allow lawyers to be more efficient at doing both of those things.”

O’Grady argues that librarians are well-equipped to talk to lawyers about technological changes within their profession. After all, librarians have seen these changes up close. O’Grady still remembers how the first Lexis terminal she saw was as big as a washing machine and had to be transported on wheels.

In that regard, she argues that lawyers should let librarians and other tech experts filter out all the noise and focus on the technology worth their attention. “Lawyers shouldn’t try and do it all,” she says. “It’s OK to delegate some tasks to experts.”

O’Grady began her career in the legal field: Her first job after graduating from Fordham University in 1972 with a bachelor’s degree in history was working for the Vera Institute of Justice on a court reform program. She then moved to the Brooklyn district attorney’s office, where she worked as an investigator.

After a stint working for a New York City hospital where she helped adopted children track down their birth parents, O’Grady decided she had a unique love, and talent, for research. She earned her master’s in library and informational studies from St. John’s University in 1980 and worked at the law firm of Shea & Gould as director of legal information services. After earning her JD in 1986 from Fordham Law, she eventually moved to Wilmer Cutler Pickering Hale & Dorr before joining DLA Piper in 2007.

Dewey B Strategic came about when she kept hearing lawyers ask: “Are we being strategic?” Partially inspired by Bruce MacEwen’s well-known blog named after a historical figure, Adam Smith, Esq., O’Grady used the Dewey pun in honor of Melvil Dewey, the founder of the Dewey Decimal System.

While the blog is named for someone from the past, O’Grady is focused squarely on the future.

“I think we are about to see a spectacular growth in innovation,” she says. “Analytics will allow lawyers to ask completely new questions like ‘What will happen?’ instead of just ‘What happened?’ Lawyers will have to speed up their adoption and embrace of analytics.” 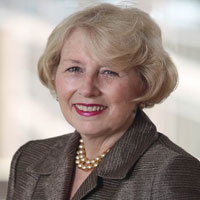 Jean P. O’Grady is currently Senior Director of Research & Knowledge at DLA Piper US, LLP. She has over 30 years of experience developing strategic information initiatives for large law firms. She has previously held director positions at WilmerHale in DC and Shea & Gould in New York. She has been an adjunct faculty member at the graduate schools of Library and Information Science at St. John’s University and Long Island University where she taught legal research courses.