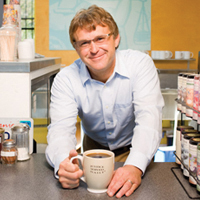 Jeffrey J. Hughes’ business card is printed in a conservative font—with black ink, of course—on nice, white card stock. It looks distinguished, like he’s someone who will come to court in a pinstriped suit and rescue you, if need be.

But he’s not wearing a suit today. If he were, the espresso machine he’s operating might blow steam on it.


Jeffrey J. Hughes’ business card is printed in a conservative font—with black ink, of course—on nice, white card stock. It looks distinguished, like he’s someone who will come to court in a pinstriped suit and rescue you, if need be.

But he’s not wearing a suit today. If he were, the espresso machine he’s operating might blow steam on it. Hughes, 43, owns Legal Grind, a Santa Monica, Calif., coffee­house/storefront law office on a major beach-community thoroughfare. Drinks there are free and the legal advice is reasonable. For $45 you get 20 minutes with a lawyer; specific tasks—like a restraining order—can be had for $150.

“We used to have free counsel and you paid for the coffee. Once that model broke down, we switched it around,” says Hughes of the ivy-covered store that once housed his grandfather’s awning shop.

The business is still a family one. Hughes’ wife, a paralegal, does contract work for him, and often their kids—three under the age of 6, whom he refers to as “my lovelies”—come to the cafe too.

Hughes’ ride is a Nissan Armada that sports the license plate LGL CAFE. He’ll tell you that it seats eight and can transport his stepdaugh­ter’s volleyball team in a pinch.

An employee describes Hughes as “intensely laid-back.” He’s personable with clients but, like many solo and small-firm practitioners, doesn’t have a ton of time for hand-holding. Somehow he manages to convey that while dressed in golf shorts and a button-down, short-sleeve oxford, sunglasses tucked in at his neckline.

View a video produced for Hughes as part of a reality TV show pitch.

BEGINNING OF A BRAINSTORM

It takes Hughes a while to explain how he got the idea for his business, and the story includes information about his grandma, his parents’ divorce, moving with his dad to nearby Orange County, busboy work at the age of 12, and helping his brother on construction projects after the 1994 Northridge earthquake.

At that point he’d already graduated from Los Angeles’ Loyola Law School and was applying for legal positions. California was in recession and there were far more candidates than openings.

“I would probably pick someone other than myself if I was making the decision,” Hughes says, “for several reasons, and the first one would be grades.”

When construction work dried up, Hughes spent a few years in San Francisco substitute-teaching, doing contract legal work and checking out coffeehouses. His grandfather had died by then, and the awning shop space was available.

“Since nothing was happening, I decided to open my cafe,” says Hughes, whose goal from the start in 1996 has been to create better legal access for the middle class, and to show there’s more to the law than litigation. Along with Hughes, 10 other lawyers handle consulta­tions at Legal Grind. The referral service is certified by the State Bar of Cali­for­nia, and if a consultation turns into paid work, Hughes gets 20 percent of the fees generated.

“I created something that could appeal to both lawyers and the public, and it wouldn’t be undignified for a lawyer to be there,” says Hughes. He describes himself as a risk-taker, but qualifies it with “calculated.”

In the next year Hughes wants to take the Legal Grind idea to law schools, and a deal with the Univer­sity of Maryland School of Law is in the works. (His other current site, in Inglewood, is run by a paralegal and only offers document preparation.) The college project will likely oper­ate in conjunction with the school’s legal clinic, and solo practitioner alums looking for business will play a large role.

Another Hughes project is a social networking site for lawyers, Legal Cafe. According to Hughes, it will focus on access-to-justice issues, and match lawyers and clients ac­cording to location and legal need.

Still, the past few years haven’t been easy. One of his best attorneys, who did family law and generated about $50,000 a year in referral fees, left to join a small firm. And the country’s credit crunch and mortgage crisis cut deeply into clients’ abilities to come up with cash retainers, even if they want to.

“It’s a lot of hard work, and I don’t know if you can make enough money to make it worthwhile,” Hughes says. “But with the law schools, I know my model can survive into the next century.”