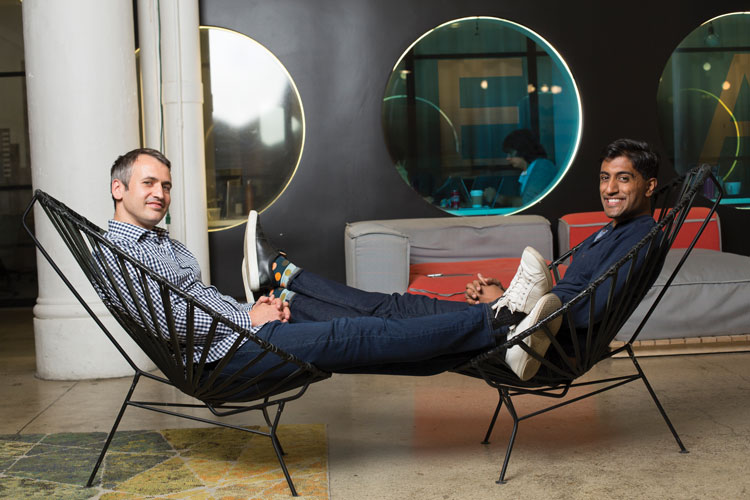 When growing up, Rohan Pavuluri and Jonathan Petts never had reason to think much about Chapter 7 bankruptcy. Both came from well-off families and graduated from Ivy League universities.

Nevertheless, they say they believe strongly that the law should not discriminate based on income. And it was that guiding principle that drove them to form the nonprofit company Upsolve, which generates free Chapter 7 bankruptcy forms for people who can’t afford lawyers.

“I have had so much luck in my life, and I couldn’t figure out the bankruptcy codes. There are so many complicated, scary things in the law because of the way that the law has been written,” says Pavuluri, 23, a 2018 Harvard University graduate whose degree is in statistics.

One must have a below-median income to use Upsolve, which asks a series of questions to generate bankruptcy forms that are then reviewed by an attorney.

Petts, 39, who got his undergraduate and law degrees from the University of Pennsylvania. estimates that on average, a user is between $20,000 and $40,000 in debt. Among the 410 individuals who in 2018 used Upsolve to generate bankruptcy forms, 98 percent received a discharge, according to Pavuluri.

Pavuluri and Petts met during the summer of 2016 at a New York Legal Aid Society luncheon. Pavuluri had been awarded a Harvard fellowship centered on finding ways to help low-income families navigate bankruptcy court, and he spent much of that summer talking with judges, lawyers and parties at the U.S. Bankruptcy Court for the Eastern District of New York. Petts, meanwhile, was working as an in-house attorney for Rassier Properties, a real estate development and management business owned by his mother’s family. Prior to that, he had been an associate at Milbank.

“We hit it off immediately and started working together full time the next day,” Petts says.

One of the first things the two did was create a list of questions in an Excel spreadsheet that they wanted to ask bankruptcy filers. Then they created a questionnaire prototype using the online software Typeform. Once they got initial validation from that, they made the software in Docassemble, an open source platform created by fellow 2019 Legal Rebel Jonathan Pyle. Users for Upsolve’s 2016-17 pilot project came from various New York nonprofits, including the Brooklyn Volunteer Lawyers Project, where Petts had been doing pro bono work.

Funding for Upsolve comes from a Legal Services Corp. technology grant, Silicon Valley venture investor Chris Sacca and grants from Hewlett Packard, the Robin Hood Foundation, the New York Bar Foundation, the Lawyers Trust Fund of Illinois and Harvard University. Also, attorneys pay Upsolve for leads—people whose needs are not a right fit for the nonprofit.

“The Upsolve model is fantastic,” Foohey says. “Filing for Chapter 7 is a task that you do not need a highly trained lawyer for.”

This article first appeared in the September-October 2019 issue of the ABA Journal under the headline “Going for Broke.”