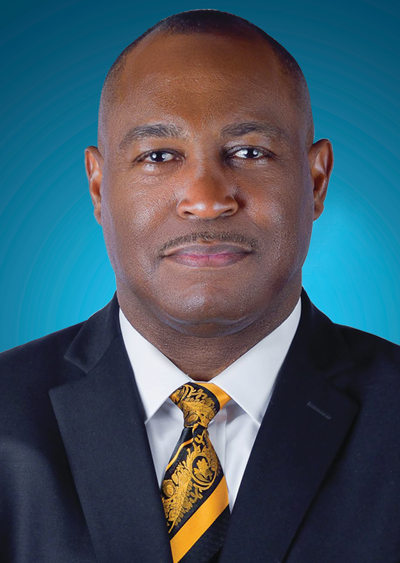 Judge Dwayne D. Woodruff is all about the challenge. He challenges others, such as the juvenile offenders who come before him in the family court division of the Allegheny County Court of Common Pleas in Pittsburgh. He directs them to do better and volunteers for several programs to help at-risk kids succeed.

Woodruff also rises to his own challenges. A former professional football player—and Super Bowl champion—Woodruff went to law school full-time while he played defensive back for the Pittsburgh Steelers. Now, after more than a decade on the court bench, Woodruff is running for a seat on the state supreme court, campaigning nights and weekends while he maintains his docket and his community service commitments.

You’re busy right now juggling a lot of different things, but you’re no stranger to being busy. When you were in law school, you went to night school for four years while also playing professional football. How did you make that work?

Why did you choose to go back to school and not just segue from football to sports broadcasting or coaching?

For me, it was always about furthering my education. My dad was in the military, and when he came back from Vietnam he was a paraplegic, but he went back to school even though he didn’t have to. He showed me that he had the drive to better himself. My mother was a young bride and traveled all over the world with my dad in the service. But she went back to get her associate degree. I have a photo of both of us in a cap and gown—she had just gotten her degree, and I had just graduated from kindergarten. There are kids who look up to me because of football, but that can be taken away from you at any moment. An education is always with you.

Were you concerned you’d get injured and not be able to play anymore?

No. Injuries are part of the game. As a player, you don’t dwell on it; you just do your job. I went to law school because I knew football was going to be over someday, and I was still going to be a somewhat young man. This was back in the day before the million-dollar contracts, and I needed to be in a position to continue to care for my family when my football career was over.

Can you share the fun story behind your choice to pursue a law degree?

My wife and I had been constantly thinking about what I was going to do after football, and we were watching PBS one night during the pledge drive, and one of the items on the auction table was an LSAT prep course. We’d talked about law school, so I thought, “Maybe this is a sign.” I bid and bid again, and then I won! I took the course, took the test, did well and got accepted to law school.

You give a lot of inspirational speeches, and you’ve worked as a mentor to at-risk kids. It’s easy to say “Work hard, stay in school.” But how do you make sure that message resonates with today’s kids? Does your role in family court give you an insight for how to reach them?

It does. A lot of kids who come into my courtroom don’t think they have anyone in their corner. I tell these kids: “Don’t let anyone tell you that you can’t be successful.” Everyone makes mistakes, but you can’t let a failure in one phase of your life define you. I don’t give up on them. I say: “I believe in you.” They just need to hear that someone believes they can do it, and they can make it.

As a former professional athlete, how do you approach the election process? Do you enjoy the competitiveness of campaigning?

I approach the election process as a requirement, a necessity. We are public servants, so it’s important that the public has access to us.

Are there fans who come to your campaign events because you’re a former Pittsburgh Steelers player? If so, does that annoy you?

I do get fans who come to meet me, and they bring balls and photographs for me to sign. I take a lot of selfies. I don’t mind—I understand the idea of campaigning, and I understand what it’s like to be a fan and to see someone you’ve watched for 12 years. So it’s my time to thank them for their support of the team and to ask them for their support in this race. I hope they’ll see what I’m about and when they leave, they’ll think I’m not just a good football player—I am someone they want to represent them, as well.

Is there a program or a ruling that ranks among those you’re most proud of?

There are two things that I am very proud of. The first is serving on the board of the National Council of Juvenile and Family Court Judges, and I am happy to have had a leadership role in making judicial education mandatory in the state. The second is a national campaign called Do the Write Thing. It’s a program that asks middle schoolers to discuss in written form how violence has affected their lives and what can be done about it. We have a banquet to recognize the participants, and two are chosen to serve as national ambassadors and to go on an all-expenses-paid trip to Washington, D.C. It’s a big opportunity for them, and it gives the community great ideas on how to stop violence.

What do you think of the science about the correlation between football and brain injury?

I am fortunate not to have had any aftereffects from playing football. I had a great time, and I loved every minute of it. But it’s a demanding, high-impact game. When you hit something, something has got to give. In my day, they didn’t call it a concussion; they’d call it a “dinger.” They’d give you smelling salts, you’d come to, and they’d send you back into the game. But concussions are a serious matter, and I think the league and the players are addressing it appropriately.

Do you ever use football metaphors on the court bench?

Not really. If you come to my courtroom, it’s serious. That calls for serious talk, and football metaphors rarely have a spot in that discussion. I try to keep it uplifting, encouraging and supportive. At the same time, there are consequences for kids who come to my courtroom, so we have to talk about that. But sometimes I’ll show kids my Super Bowl ring. Not the first time they come in, but if they’re on the right track, I’ll let them try it on. I’ll say: “Look, you can accomplish great things—maybe things you can’t even think about now—but success will come to you.”

This article appeared in the June 2017 issue of the ABA Journal with the headline "Field Goals: Dwayne Woodruff, a judge and former NFL player, pushes himself to achieve while he inspires others to succeed."