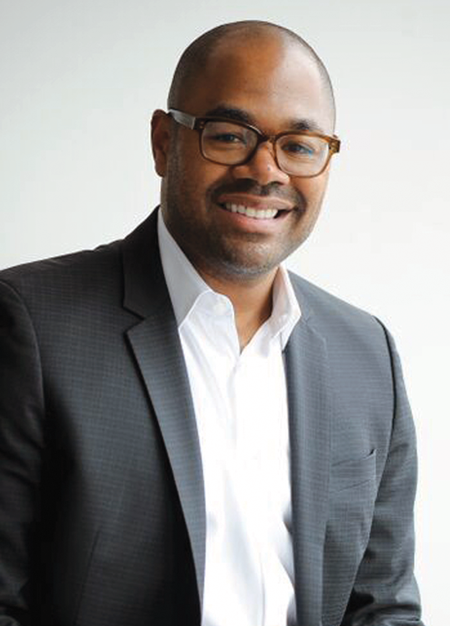 As a college intern at Def Jam Records, Julian K. Petty saw firsthand how poorly artists were represented, and he vowed that someday, he’d do something about it. Fast-forward 20 years, and Petty now is a top entertainment lawyer who represents some of the biggest names in rap and hip-hop music, including Childish Gambino, A Tribe Called Quest and the estate of the Notorious B.I.G.

As head of Nixon Peabody’s entertainment law practice, the Los Angeles-based partner specializes in crafting cross-disciplinary deals that maximize ownership interests and business opportunities that can range from nontraditional record deals and reality shows to concert promotions and clothing lines.

Q. You’re always doing exciting work, from brokering the deal for British singer Estelle to play a part in an episode of the Fox network TV show Empire to representing the Harlem Globetrotters. What are you working on right now?

A. There are three projects that are taking up large chunks of my day. First is the Tribe Called Quest album, their first in 18 years. I was very involved in putting that deal together, and we still have merchandising and licensing deals to finalize before they mount a tour. I’m also working with Childish Gambino, making sure his vision gets executed correctly, and he has the right partners for his music. And today we just released a single from the long-awaited Notorious B.I.G. and Faith Evans duet record.

Q. Can you tell me more about that deal? There must have been some legal work involved since Biggie was murdered in 1997.

A. I’ve represented the estate and Faith for several years now, and Faith had this idea of doing a duet record with her late husband, Christopher Wallace [the Notorious B.I.G.], like Natalie and Nat King Cole. I went to the company that owns his master recordings, and they didn’t want to do anything. But I rarely take no for an answer.

Q. How did you convince them?

A. At the end of the day, I am in the solutions business. I showed them how this was going to build value and would benefit everyone. The company that owns the master recordings wants to find new ways to exploit the catalog, and this is a new, fresh and authentic way to do that. It’s good business and it’s a great art piece. And that’s how we approached it.

Q. What’s your favorite part of your practice?

A. I love the music and the live performances, but my favorite part is helping young people fulfill their dreams. I enjoy being part of that process, from the point when an artist comes in with an offer to when they hand their mom the keys to her own house. I just watched that happen with a client, and whenever that happens, I always get the chills.

Q. Do you think musicians are treated better now than they used to be? I’m thinking about situations like in the movie Straight Outta Compton, where the naive ‘90s rap group gets cheated by lawyers and the record companies. Is that a cautionary tale that’s become outdated?

A. I don’t think that story is outdated at all. Listen, the business side of music is driven by desperation. You’re talking about someone with a dream who puts their art out into the world and is trying to make a living at it. When you have opportunity dangling right in front of you, you can make bad decisions. The key is not to be desperate. If you shift the power, you shift the conversation.

Q. You were once an aspiring rapper. Are you ever disappointed it didn’t work out for you as an artist?

A. Not really. But every once in a while, I’ll listen to an old demo. That was definitely my dream. I started rapping when I was 12. I used to write my own lyrics, and I worked out of the studio where [hip-hop group] EPMD recorded their first three albums. I’d go to the record companies and pitch my stuff, and I even had some label interest at one point. I did that until the end of high school, and nothing happened. So I went to college at Howard University.

Q. During law school, you clerked for well-known entertainment lawyer L. Londell McMillan, who represented Prince, Stevie Wonder, Lil’ Kim and Michael Jackson. You read about him in Black Enterprise magazine and cold-called the firm. What did you say?

A. First of all, I’d worked for four years before law school, so I had a little more maturity than the average law student. I knew I could do this. I didn’t have any concerns about what would happen after I got him on the phone. When I came in for an interview, I told him what I could do to add value to his practice. People are always asking “Show me the forms” or “Teach me entertainment law.” But my thing was: “I am going to do everything in my power to make your life easier.” I worked in technology; I’ve managed people. And I have a passion for zealously advocating for creatives.

Q. How did your tech background help?

A. It was actually one of the reasons I was there through the summer, through the next school year and then after graduation. For example, I was able to quickly grasp the importance of ring tones and SoundExchange [a performance rights organization for online radio and internet radio], allowing me to make sure my boss was ahead of the curve and capitalizing off those new revenue streams for our clients.

Q. What’s exciting you right now about the music business?

A. I’m excited about the concept of success shifting. It used to be you sold this number of records, you got a gold or platinum plaque. In today’s marketplace, there are so many different revenue streams that you can have an extremely successful career with a very niche audience. I have a client, Vince Staples, who had a critically acclaimed album, Summertime ‘06. Five or 10 years ago, you’d look at his sales for the album and say, “This guy’s not that successful.” But he’s touring all around the world and has several endorsement deals. I find this very compelling, and it’s what keeps me motivated.

Q. Is it about more than just making music?

A. You definitely have to hustle more. You have to be more entrepreneurial. And that’s the challenge because you don’t want people to lose their creative space. But if you want to succeed, you’ve got to get out there.

This article originally appeared in the April 2017 issue of the ABA Journal with this headline: "Check the Technique: When it comes to rap and hip-hop music, LA lawyer Julian Petty represents."