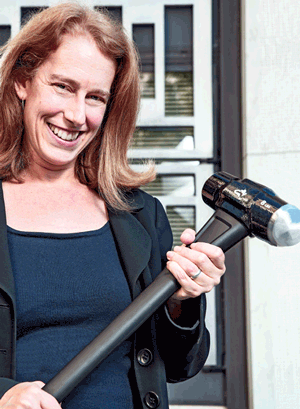 Now, Shannon Liss-Riordan and her Boston-based firm are at the forefront of employee misclassification cases that emerge from the new “sharing economy.”

She recently negotiated a $100 million settlement against Uber (which, as of press time, still is ongoing). It’s the latest challenge in a career spent winning higher wages and better treatment for hardworking Americans.

Q. You’ve been all over the news for the Uber case. Do you think high-profile lawsuits such as this one have influenced other shared-economy companies to adopt more worker-friendly policies?

A. Yes. I am really proud of the fact that there’s a growing list of companies like Skype, Instacart and Luxe Valet that have decided to go the other way—either from the get-go or they’ve made changes. Companies are seeing this litigation, and they don’t want to be caught up in it, so they put policies in place so they don’t have to fight these battles. I consider that a big victory, and it shows that the litigation I’ve been doing serves an important purpose.

Q. In the middle of the complex Uber negotiations, you took a break to take and pass the California bar. Was that something you planned?

A. I had a growing list of cases in California, and one defense lawyer thought he was being very crafty and smart by challenging my admission to the bar. He showed the judge this large stack of cases I had pending in California and said, “She can’t keep practicing on a pro hac vice basis.” I said, “Your honor, I will take the California bar.” I did, and I passed. His tactic backfired, and now he’ll be seeing a lot more of me.

Q. Why do you think people choose to take jobs in the shared or gig economy, even if they realize they might not be paid fairly?

A. One of the reasons the gig economy has been growing in popularity is that people really do value flexibility. It’s a trend we’ve been seeing in the workplace in recent decades, but the gig economy takes that to a different level. Just because you set your own hours doesn’t mean you are completely autonomous and you own your business. You’re not your own boss—you’re doing work set up for you and relying on their customers. It’s one of the oldest tricks in the book.

Q. You’re one of only a handful of practicing lawyers in the country who also owns a pizza parlor. After you successfully represented employees in a lawsuit against a chain of pizza restaurants, the restaurants ended up on the auction block and you bought the Harvard Square location. How has being this type of business owner affected how you approach your practice?

A. It’s given me good perspective on the kinds of things employers deal with. I think about what it means to be a good employer. Even though I have excellent managers, it’s a lot of work; and I don’t underestimate what business owners go through. But my job is always to make sure businesses think about their employees and do not cross the lines that have been drawn by the laws.

Q. What do your kids think of it?

A. It’s pretty much every kid’s fantasy to have their parents own a pizza place.

Q. Let’s talk about your life before you became a lawyer. Before you went to law school, you worked for the legendary congresswoman and women’s rights trailblazer Bella Abzug. What was that like?

A. She was a great inspiration. I learned a lot about how to put ideas into action. No goal was too lofty. She’d just say, “Here’s what we’re going to do,” and we’d do it.

Q. How did you get that job?

A. Through grit and determination. I had gotten involved in political organizing in college. I wasn’t from a particularly political family, but once I was in college and was exposed to what was going on in the world, I got fired up and got involved. I decided that after graduation, I would go to New York and work with a women’s organization. So I got a directory of all the women’s groups in New York, and I called them all.

Q. Did your work in political activism prepare you for law school?

Q. I have to ask about your nickname, “Sledgehammer Shannon.” How did that come about?

A. After we won the federal court trial for the skycaps here in Boston, we had a big victory party. It was very rowdy, and one of the skycaps called me “Sledgehammer Shannon.” It got picked up in a Boston Globe story, and it carried on.

A. Yeah. It’s kind of funny. People who know me personally think “You are such a nice person!” But it shows that when I am in the courtroom, I let it all out. I can be pretty passionate about what I am fighting for, so to the extent it refers to that, I am proud of it.

Last updated Dec. 8 to remove the 10 Questions Live sign-up box because the event has been canceled.

This article originally appeared in the November 2016 issue of the ABA Journal with this headline: “Fare Fight: ‘Sledgehammer Shannon’ is going after industries on behalf of workaday folks.”